Throughout most of the 1950s and '60s, Jack Lemmon was a contract player at Columbia Pictures, while Richard Quine was a young house director. At some point, Lemmon and Quine's boss, the infamous Harry Cohn, lured brilliant funnyman Ernie Kovacs into the mix. Eventually, the three got together - many times.

Much has been written about the Jack Lemmon/Walter Matthau/Billy Wilder triumverate. But first there was the Lemmon/Kovacs/Quine teaming - 1957's “Operation Madball,” 1958's “Bell, Book and Candle” and 1959's “It Happened to Jane,” all made for Columbia.

One could say that Lemmon/Kovacs/Quine anticipated Lemmon/Matthau/Wilder. So why hasn't someone resourceful at Sony Home Entertainment entertained the idea of a boxed set? Too esoteric, I suppose. 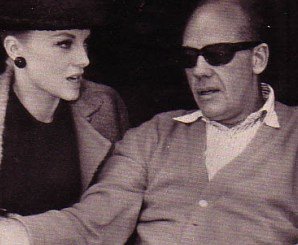 Meanwhile, Lemmon and Quine were particularly proficient, also collaborating on 1955's musical version of "My Sister Eileen" (Quine starred in the original Roz Russell version when he was a young actor) and 1962's "The Notorious Landlady. (Lemmon and Quine also made 1965's “How to Murder Your Wife," for United Artists, not Columbia.)

As I noted, during his lifetime, much was made about Lemmon's enduring relationships with Wilder and Matthau, but as you can see, he shared equally influential (and frequent) collaborations with Quine and Kovacs. Wilder was inarguably the director who put Lemmon on the map, but Quine was also an important recurring thread throughout his life and career.

Both Quine and Wilder served as Lemmon's best men when Lemmon married Felicia Farr in Paris on 17 August, 1962. "They were both my dearest friends," Lemmon once told me, "I couldn't choose between them."

And when Kovacs subsequently joined up, it was a teaming that would prefigure the Lemmon-Matthau acting relationship and serve as something of a prototype for the work Lemmon did with Matthau.

Couldn't you imagine Lemmon having done "The Fortune Cookie" and "The Odd Couple" with Kovacs?

Surprisingly, two of the Lemmon-Kovacs-Quine titles not only are not available on DVD but have never been released on video at all. Adding insult to injury, the two films - both co-written by Blake Edwards - haven't been aired on commercial televison for years. They seem to have disappeared from syndication and are virtually lost movies now.

The first is the very funny "Operation Mad Ball" (which I always think of as the '50s precursor to "M*A*S*H"), which Edwards wrote with Jed Harris and Arthur Carter (from a play by Carter) and co-starred Kovacs, Mickey Rooney and Arthur O'Connell. The second is "The Notorious Landlady," which Edwards co-wrote with Larry Gelbart (TV's "M*A*S*H" and Broadway's "A Funny Thing Happened on the Way to the Forum") and which co-starred Quine's muse, Kim Novak, Fred Astaire, Estelle Winwood, Lionel Jeffries, Maxwell Reed and Phileppa Bevans.

Kovacs' work with Lemmon in both "Operation Mad Ball" and "Bell, Book and Candle" is inspired. But he outdid himself in "It Happened to Jane." While we were working on a book together, Lemmon told me that Harry Foster Malone, the villain that Kovacs plays in “It Happened to Jane,” was based directly on Columbia head, Harry Cohn, who died while the trio was making "Bell, Book and Candle" the year before.

Kovacs even affected Cohns' look, cosmetically, for his wicked impersonation, donning a bald plate for the film and reportedly gaining 40 pounds.

While it's often been rumored that Malone was modeled after the Charles Foster Kane character in Orson Welles' "Citizen Kane" (1941), only part of the character's name was borrowed from Welles. But the name Harry itself comes directly from Harry Cohn.

There's a brilliant bit of dialogue in "Jane" - written by Norman Katkov - which could have been spoken by Cohn himself...

Harry Foster Malone: “Get this, Sloan. I’m 52 years old and I was born on the lower east side in a cold-water flat. I wasn’t lucky enough to get to college or law school. I’m a slob that came up the hard way. But let me give you a chunk of information. Anybody who gives trouble to Harry Foster Malone, gets trouble, got that?

Crawford Sloan (Walter Greaza): “Have it your way, Harry.”

"It Happened to Jane," inspired by Frank Capra's films (and with the Capra-like working title of "Old 97 Goes to Market"), was filmed in small-town Chester, Conn, where Quine took advantage of the local populace for a memorable town-meeting sequence that revolves around Lemmon and the galvanizing speech he gives. And on a more charming note, there's the moment when Doris Day, balancing herself on a moving train coerces a proposal out of Lemmon. So, exactly why hasn't this endearing little film been more embraced? It's excellent.

Lemmon may have had more pretigeous hits in such Wilder films as "Some Like It Hot" and "The Apartment," but few of his films are as well-written as "It Happened to Jane " and "The Notorious Landlady." I know I'm in a minority here but so goes it.

While I'm at it, Kovacs is long overdue for a rediscovery. Sure his TV standup routines have been showcased on DVD but how about the other films that he made for Columbia - Sir Carol Reed's "Our Man in Havana" (1959), Mervyn LeRoy's "Wake Me When It's Over" (1960), with Dick Shawn, and Irving Brecher's "Sail a Crooked Ship" (1961)? At least, his 1960 Columbia film for Quine, "Strangers When We Meet," is available.

Finally, there's Judy Holliday - another Columbia contract player, like Lemmon and Kovacs - who deserves a boxed set of the six films she made for the studio, namely “Born Yesterday,” “The Marrying Kind,” “It Should Happen to You,” “Phffft!,” “Full of Life” and “The Solid Gold Cadillac.”

(Artwork: From top: Richard Quine with Virna Lisi on the set of United Artists' "How to Murder Your Wife," publicity shots of Doris Day, Jack lemmon and Steve Forrest in Columbia's "It Happened to Jane" and a publicity still of Ernie Kovacs)

Anyone interested in perusing some 2060 of my film reviews, dating back to 1994, can do so by simply going to RottenTomatoes.Com
Posted by joe baltake at 4:40 PM

Quine is new to me, but I loved both Lemmon and Kovacs. I didn't realize how many films they made together. "Operation Mad Ball" is great and should be on home video!

Loved your post. Well said. I run http://erniekovacs.blogspot.com and www.erniekovacs.net and hope to link some of these great articles.

I've often thought that had Ernie lived, he would have been Oscar in the movie version of the "Odd Couple."

"The Notorious Landlady" is one of my favorite films and my favorite Lemmon movie. I want to see it again!

I saw Operation Madball in a movie house when it first came out and never forgot it (L.M.A.O.). The laughing was so loud that we missed a good part of the movie. I always wished that I could have a home video so that I could really enjoy it once again. I don't go to movies or buy videos as I don't think that they have the entertainment that I enjoyed going every week in the 40's and 50's. The TV program "Bilko" with Phil Silvers reminded me of the movie theme. I enjoyed it as well.
UPCHUCK