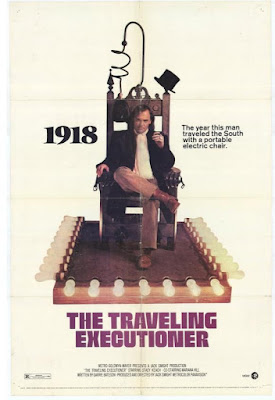 Smight's quirky little black comedy, like several other unlucky Metro titles of the period, was made during the chaotic reign of James Aubrey.

But this one was ideal for the '70s, when the counterculture was in full bloom and the period's youth audience more than ready to appreciate it.

Too bad the suits at MGM didn't "get it." Again, no surprise here.

The title tells all. Keach, strutting around and flaunting sexual intimidation, plays Jonas Candide who, in 1918, traveled around with his own portable electric chair, going from prison to prison with his protégé - the young assistant/mortician, Jimmy (Bud Cort) - charging $100 per execution.

Two of Jonas' potential victims are the Herzallerliebst siblings - Gundred and Willy (Marianna Hill and Stefan Gierasch) - and while he successfully executes Willy, Jonas falls for Gundred, hoping to fake her execution.

Of course, nothing goes according to plan and the film's finale, under Smight's careful direction, is both pitch black and unusually touching.

Stacy Keach, a singular actor, had a flourishing (but brief) starring film career at the time, what with roles in "The Heart is a Lonely Hunter," "Fat City," "The Life and Times of Judge Roy Bean," "Doc," "The Dion Brothers" (aka, "The Gravy Train"), "Luther," "End of the Road," "The New Centurions" and, with Cort (and hidden under heavy make-up), in Robert Altman's "Brewster McCloud" (also released in 1970), all within four years.

Smight also had a good year in '70, having also directed the underrated screen version of John Updike's "Rabbit Run," featuring memorable performances by James Caan and the late Carrie Snodgress, and two solid genre films, "Harper" (1966) and "No Way to Treat a Lady" (1968).


~Marianna Hill and Stacy Keach in The Traveling Executioner"
~Photography: Metro-Goldwyn-Mayer 1970©
Posted by joe baltake at 10:18 AM

I love this film. I remember seeing it in 1970 and being really touched by it, as well as amused. I haven't seen it since. It's like it disappeared and never existed. Thanks for reminding me of it.

I did a Q&A with Keach a couple of years ago, and when this came up, he mentioned how nervous he was, this being one of his first films. I asked why, given that he had been acting onstage in front of audiences for years. He said, "That's a very good question." He pondered for a moment and then said, "I think it was because the camera would come in so close to me. It was kind of intimidating. On stage the audience is always several feet away." It's hard to think of Keach being intimidated by anyone, even when young, but there you go.

Joe, I will now attempt to see THE TRAVELLING EXECUTIONER. In your article, you mention that there were several "other unlucky titles" that were mistreated/mishandled due to incompetent MGM management at the time (early to mid-seventies). You would be doing all your readers a HUGE favor by mentioning these "other unlucky titles."

I never heard of this film but always believed Stacy Keach was one terribly underrated actor. Loved the harelip and I even watched him on TV in the detective series. So cool. Met him in London at a party. A charming, witty and very sexy guy.

Well, I can mention four of them. During my time at MGM/UA Classics, I discovered that Ken Russell's THE BOY FRIEND and Blake Edwards' THE WILD ROVERS were last-minute hatchet jobs on dupe negatives; the originals still survived internationally, so I was able to reissue them intact. Alas, Peckinpah's PAT GARRETT AND BILLY THE KID and Edwards' THE CAREY TREATMENT were butchered from the camera negatives; fortunately, editor Roger Spottiswoode, anticipating trouble, secreted the trims from the former, allowing it to be reconstructed years later, but no such angel was around for CAREY--Edwards' cut is gone forever.

Unsurprisingly, Aubrey was one of the inspirations (along with Robert Evans) for Robert Vaughn's venal studio head in Edwards' chef d'oeuvre S.O.B.

Mike, thank you so much for the information in your reply.

I have never seen WILD ROVERS; PAT GARRETT AND BILLY THE KID; or THE CAREY TREATMENT. In fact, I had no clue that the last film was directed by Blake Edwards (one of my favorite directors). Thanks again, Mike. Marvin

Mike- As Marvin says, great stuff. Thanks. Re “The Carey Treatment,” even in butchered form, it amaze me that Edwards got away with a film on abortion. That said, I have a fondness for Skye Aubrey, despite her father.

Another title: Jerry Schatzberg’s “All-American Girl,” with Stockard Channing and Sam Waterson. I attended a huge MGM junket back in the mid-70s, hawking all their upcoming features. This was one of them. Channing and Schatzberg were there. A few months later, MGM sent out a release with a title change, “Dandy, The All-American Girl.” Then the film was shelved. It was released belatedly – dumped actually – under the TV-movie-sounding title “Sweet Revenge.” I’ve no idea if it was butchered in the interim but I wouldn’t doubt it.

Nice piece (and savvy praise) for EXECUTIONER, one of my favorite pictures. It's true that this was very badly handled by MGM -- I ended up seeing this at a grindhouse in the fall of '70. This is such a dark, bawdy crowd-pleaser (with an incandescent Keach performance), I can't understand why it remains fairly obscure. [Many do recall it from its early '70s CBS Late Movie airings.] Sadly, the Aubrey regime fiddled with the movie, and there are some odd continuity lapses. [An LA Times article back in the day mentioned Smight's unhappiness with Metro interference with his cut.] This one deserves a lot more attention.

DANDY, THE ALL-AMERICAN GIRL was an Official Entry at Cannes in 1976, but I'm not sure whether MGM released it anywhere at that time (or with that title). I saw the picture, retitled SWEET REVENGE, at the USA Film Festival in Dallas in the spring of '77. Jerry Schatzberg came out for a Q-&-A after the screening, and discussed the film (and told dry anecdotes about its screenwriter, B.J. Perla, who based the movie on elements of her life as a car thief).

All went fairly well until an audience member asked about the director's use of lap-dissolves in the picture. Schatzberg couldn't immediately understand the question, replying that there were no dissolves in the movie. Ah, but there were indeed dissolves in the print just screened (as numerous members of the audience were quick to point out). It's difficult to describe the look that suddenly came upon Schatzberg's face. He cut the Q-&-A short and skipped the post-film press conference.

Same here. I remember this movie just as did Tim Sheridan for the same reasons. I became a lifetime fan of Stacy Keach. The Irony was the beautiful poetry he quoted to his customers. A real Gem of acting. Thank you.