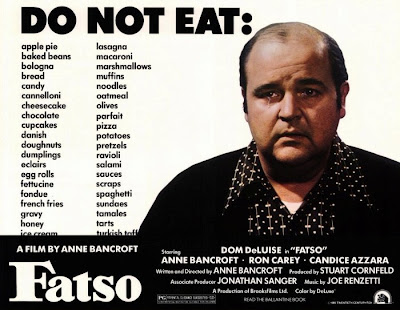 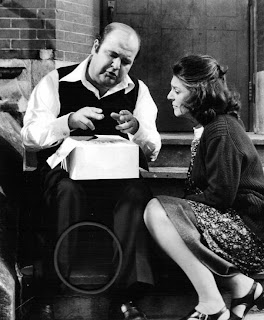 Films fail for a variety of reasons, the most recurring one being neglect - by the studio that produced it, the critics who review it and a public that just doesn't care. Neglected films are what drives this site.

Case in point: Anne Bancroft's soulful "Fatso," her only directorial/writing credit. Released (half-heartedly) by 20th Century-Fox in 1980, the small, very small, taciturn film offered Dom DeLuise one of his few noteworthy film roles ("The End" is another) as Dominick DiNapoli, an unassuming guy with a weight problem and, by extention, body-image issues.

Two women come to his rescue - his sister, Antoinette (played by Bancroft herself), who tries to nudge him towards a healthier diet and lifestyle, and Lydia (the singular Candice Azzara), a neighborhood woman who is just the distraction that Dom needs. Bancroft's sure hand with her actors and the material is impressive. She handles both with the simplicity of a silent film; the DeLuise-Azzara courtship is like a tiny duet out of Chaplin.

The film, hastily dismissed upon release, seems downright prescient nearly 40 years later. Ahead of its time? Has its time finally come? Perhaps. Almost impossible to see, the affecting "Fatso" surfaced occasionally on HBO and, in its former incarnation, the Fox Movie Channel. But no more. And it had a brief DVD life, courtesy of Anchor Bay, in 2006. But no more.

Note in Passing: Dom DeLuise directed his own film, for producer Ray Stark, a year earlier - "Hot Stuff," in which he co-starred with Jerry Reed, Suzanne Pleshette and Ossie Davis. Also lost and also appealing.

~The poster art for "Fatso"

~Dom DeLuise with Anne Bancroft on the set of "Fatso"
~photography: Twentieth Century Fox 1980©
Posted by joe baltake at 10:37 AM

DeLuise was also neglected, one big missed opportunity for Hollywood. I saw him on stage in "A Funny Thing Happened on the Way to the Forum" and he was the equal of Zero Mostel. I always thought that he and James Coco, another forgotten personality, should have played brothers in something. You didn't mention it but I think Dom had a good role in "The Best Little Whorehouse in Texas."

I always thought this was a neat little character study tucked inside an affable sitcom. Looking forward to seeing it again

I would really like to know the history of this film - how it came about. I think that a first film reveals a lot about the person. So what does this reveal about Anne Bancroft? Why did she direct it? What attracted her to the material? Why didn't she ever direct another feature? These are answers that I want but she's no longer around to fill us in. Maybe Mel Brooks can if "Fatso" is ever put out on DVD with commentary.

T. Williams- Good idea about the commentary on a future disc of "Fatso," but it's unlikely to happen. The film is too much of a nonentity and it would be put out there only if Brooks pushed for it - which I can't see happening. There's too much of his own stuff that isn't out here.

Loved DeLuise, loved Fatso, and my intuition as to why she made it is because she had a loved one with weight issues or that she wanted to update "Marty."

Carrie- Your theory makes sense - both theories, in fact. Yes, there is something obviously very personal about this little film, but it never occured to me that Bancroft was using "Marty" as her template. I'm happy that there is at least one other person out there who is a DeLuise enthusiast.

Watched Fatso for the first time last night. I learned that Don DeLuise could act. And Anne Bancroft could direct. Very good movie. I didn't even recognize Anne Bancroft until the credits rolled.
I thought the movie had a pace and feel similar to The Graduate - and I made that observation before I knew it was directed by Mrs. Robinson. No way can that be a coincidence. And the humor reminded me of Mel Brooks - who Anne Bancroft was eventually married to. I did not see him get a writing credit though. Did they even know each other yet?

Doug- First off, I'm surprised - and happy - that you got to see it. And just recently. What timing. I assume you have an old DVD or a tape from TV. Anyway, Bancroft had been married to Brooks for many years - decades - by the time she tried her hand at directing. "Fatso" was her first and only film as a director. Anne also wrote the script for the film, although I wouldn't be surprised if Mel provided some uncredited assistance in that area. I've never picked up on the movie's "Graduate" connection, but the next time I watch it, I'll observe it more closely. I may have to borrow your copy!

I loved "Hot Stuff". My parents took my brother and I to see that a couple of times. Once as a double feature with "Smokey and the Bandit". Great 4 hours of stupid fun and swearing.

w.v.- That's the point of this site! Forgotten/underrated movies. -J

Many many thanks, Joe. I have never seen that film. Enjoyed your blog on that. I didn't realize that Anne Bancroft directed it. Marvin

It would never have occurred to me to see Fatso but you give good reasons why other people didn't either. All I had to see was the title and the poster. It's worst than calling a movie "Loser." (or maybe someone did).