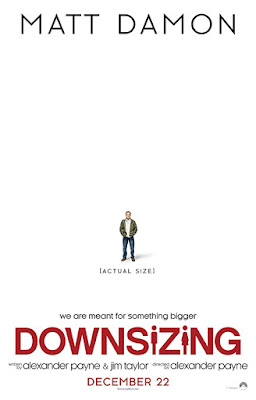 Alexander Payne's "Downsizing" completes a triptych that Paramount Pictures started with Darren Aronofsky's ”mother!” and George Clooney's ”Suburbicon.” Whether intended or not, all three function as creative sociopolitical commentaries on the pervasive contentiousness of the times.

Not surprisingly, each one, whose respective narratives could be called confrontational, has been misunderstood by critics and audiences alike - with the latter taking to CinemaScore and Rotten Tomatoes to harumph.

Of the three, "Downsizing" is the most complicated and, by entension, alienating because Payne and his writing partner Jim Taylor have concocted not necessarily a two-act film but two movies - one light and airy and the other rather dark and sobering. And, from where I sit, each film (or part, if you prefer) represents one of the major political parties.

The brighter first half deals with the notion of literal downsizing, wherein a person volunteers to be miniaturized, ostensibly as a way to produce less waste and thereby save the planet. But the real draw of downsizing is that one can acquire more for less and experience a more privileged life. Money goes further. A few thousand dollars in real life translates into millions in Leisureworld, one of the tracts with Barbie dream houses where the miniaturized are ensconced - or rather, more accurately, segregated. 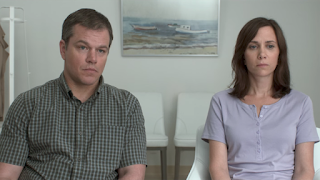 It's the blatant materialistic side of downsizing that attracts Paul and Audrey Safranek (Matt Damon and Kristen Wiig), particularly Audrey who dreams of living large in a McMansion. It's the first half of "Downsizing" that drives the trailers for the film, giving the impression that it is strictly a cheery sitcom; virtually nothing from the film's more thoughtful (and potentially off-putting) second half, during which Paul becomes enlightened and radicalized, is included.

There's no denying that Payne makes an abrupt left-hand turn with his narrative or that audiences expecting one kind of film have every right to be angered when they're lured into another, altogether different movie. 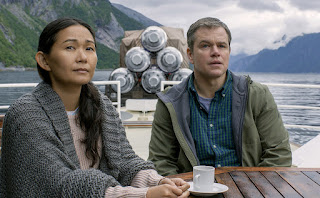 Suddenly, Leisureworld isn't the haven as it was advertised to be. Paul discovers a huge Trumpian wall - huge! - that separates the newly elites from the undesirables, who are largely people of color. Paul meets Tran, a Vietnamese immigrant who was miniaturized against her will, left with only one usable leg, but who has a work ethic and conviction that were once celebrated as American virtues but are now associated with "losers," a word favored by the powerful.

The heaviness of this part of "Downsizing" is lightened considerably by Hong Chau's remarkable, exhilarating performance as Tran - and by the comic relief provided by the ever-game Christoph Waltz as a displaced, downsized playboy, whose character's cynicism and resourcefulness complete Payne's less-than-flattering vision of America in its current state.

And Matt Damon takes his affable everyguy persona into a new realm as he telegraphs Paul's confusion and the realization that he's always been "small" but can now do something about it. He plays a simple man who is humbled into doing something that matters - something of consequence.

And it's humbling to witness this actor express so much so quietly - and with such little effort.

No, "Downsizing" is not the larky sitcom promised by its trailers, not a Disney-esque sitcom about the joys and riches of being only five-inches-tall. It's actually taller than that. (Forgive the shameless pun, but it was absolutely intended.) Its social consciousness is big and very progressive.

To sum it up, I liked it. Thanks, Paramount, for this terrific holiday gift.

That said, "Downsizing" joins a select group of titles about the miniaturized, as evidenced by this little album of stills: 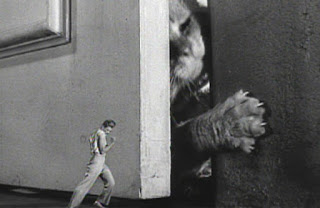 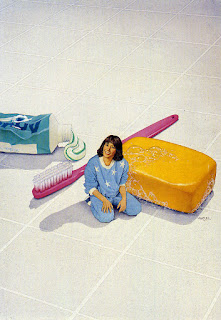 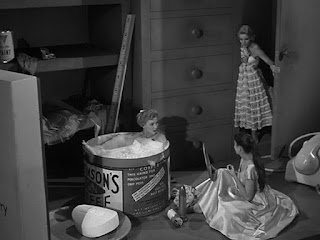 Right on! I went into this looking for some comic amusement, per the trailer. And although I enjoyed the comic first part, the second part is much better. Powerful stuff.

As you know, DOWNSIZING has not been popular with film goers. (I was one of those film goers who did not care for it.) But after reading your searing analysis of this film, I can hardly wait to see it again! And isn't that, or shouldn't that be, the purpose of film criticism/film commentary? Namely, to enrich the film going experience of film attendees? I especially liked your "allegory" in which you equated the two "parts" of the film to the two main political parties! So, Joe, you get "four stars" for your latest blog. Until I see DOWNSIZING again, however, I myself will refrain from giving the film any "star rating."

Joe, I was able to like a lot both mother! and Suburbicon, without the help of reviews/commentaries. Not so with Downsizing. Still, when I put A.O. Scott's review together with your ADDED INSIGHTS, I now LOVE the film (well, not really). I will state that you added considerably to Scott's analysis, making the analysis quite a bit deeper and the film much more attainable. Marvin

My two cents: DOWNSIZING is a film where the parts are better than the whole. Individual scenes are very good, but they don't hang together, and the constant left turns, plot-wise, keep throwing us off. One or two more passes at the script would have solved the problem.

Glad to hear you liked SUBURBICON; I did, too. Again, it was very disjointed, and Paramount goofed by selling it as a comedy, but on the whole it worked better than DOWNSIZING.

No power on Earth will ever get me to see mother!

Mike! Be adventurous. Give "mother!" a chance. I can guarantee that it is an overwhelming film. For better or worse, it's take one's breath away. No exaggeration. -J

Thanks, Tish (and thanks also to Michael L. & Marvin). But, yes, it is the other way around. The first half of "Downsizing" conveys Republican values, while the second half is decidedly the Democrat viewpoint.

Sorry, Joe, but life is too short to waste on movies that are going to upset me. I think Aronofsky is grossly overrated anyway, so why should I see a picture that even many of his own idolaters hate?