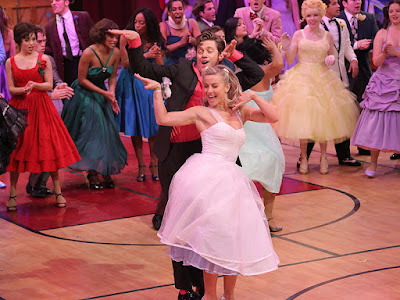 I thought that it would be somewhat measured to let some time pass before commenting (belatedly) on Fox's bravura inaugural entrance into the Live! TV! Musical! sweepstakes - but my reaction remains ... wow!

While I still have some serious reservations about the queasily social/moral implications of what "Grease" is saying *, there is little doubt that, technically, Fox's "Grease: Live" blew NBC's rather timid, tentative attempts at the live TV musical out of the water (with apologies to Craig and Neil). In comparison, NBC's "The Sound of Music," "Peter Pan" (oy!) and "The Wiz" seem creaky and dated and, well, underwhelming.

"The Sound of Music" remains the ratings winner - with an average of 18.6 million viewers - but then it came on the scene with a genuine superstar in the lead, one with a huge following, Carrie Underwood.  And I will forever be grateful to Craig Zadan and Neil Meron for introducing America to the original stage production of that Rodgers and Hammerstein show (so much better than the 1965 Robert Wise version, which was terribly Disney-fied).

"Grease: Live," on the other hand, was clearly based not on the original off-Broadway musical but the 1978 cartoonish film version, as adapted by the late Bronte Woodard. In terms of the new TV genre, it came in second with 12.2 million viewers but it also nabbed an impressive 4.3 rating with that all-important age group, 18 to 49 years old.  And that matters.

Numbers aside, "Grease: Live," directed in tandem by "Hamilton's" Thomas Kail (who, I assume, oversaw the actors) and Alex Rudzinski (who handled the jaw-dropping technical accomplishments), worked as something of a new hybrid - part theater, part film, part reality TV and (like the original film) part cartoon - a creative mash-up that worked exhilaratingly well.  "Grease: Live" became better and better as it progressed, seemingly topping itself at every turn, and outdid itself with a big, bang-up finish.  When the cast appeared on camera for its version of the curtain call, a standing ovation was more than deserved. Bravo!

Julianne Hough was perfect in the role of Sandy, more age-appropriate than Olivia Newton-John who was 30 when she essayed the role in the '78 film, and while Broadway's Aaron Tveit was techically correct as Danny, at 33, he is way too old for the role - and looks it.  Plus, it doesn't help that he's no John Travolta. Vanessa Hudgens, a young pro, managed to turn Rizzo into a sympathetic character, somehow outdoing her estimable predecessor, Stockard Channing.  And Hudgens was outstanding in her two big numbers - although I personally had hoped that the producers of this version would have finally retired the cruel "Sandra Dee" number.

Kudos also to choreographer Zach Woodlee and his assistant Matthew Peacock (both from "Glee") who managed to equal Patricia Birch's outstanding dances for the original film, without imitating them at all.

* My problem with "Grease": Sandy has to reimagine herself as a sexpot to win Danny.  And what does he do? He simply dons a varsity sweater. 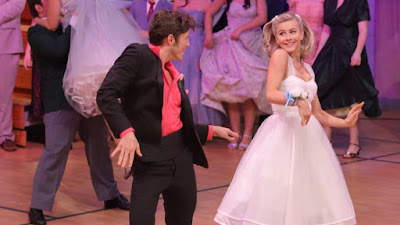 Joe- I'm glad that you brought up how important Carrie Underwood's name and presence were to the big success of "The Sound of Music." None of the other subsequent TV musicals had big name in their casts. I also agree that "Grease: Live" was absolutely awesome!

It took no great leaps to outdo "Peter Pan" or "The Wiz." Both were pretty lame and, for what it's worth, "The Wiz" was never a great show. Even Sidney Lumet couldn't do anything with it when he filmed it.

So glad you referenced the "queasy morality" of "Grease." I feel that people who love this show/movie are oblivious to what it's saying. Frightening.

I was so impressed with the entire production, the way they utilized the set, indoors and out. Incredibly lively.

I forgot to watch it. Will do, as I am probably the only person in America who hasn’t seen it.


Here's a not especially good reply to your column, because I haven't seen a single one of the live presentations you reviewed. Missed 'em all. Showing my age, no doubt. As always, though, I applaud your consistency in mentioning age-appropriate casting which too often ruins otherwise entertaining material. Examples are too numerous and you don't need them from me, anyway.

You have to remember that the awful "Sandra Dee" song was written by two (clueless) men, who thought it was funny to make fun of a cute blonde actress who, because she was a cute blonde actress, was somehow an easy target. The time in the show When the song is performed, Sandra Dee was well beyond "Gidget" and had played a role in "A Summer Place" where her character flirted with unwed pregnancy and she was a married woman - to Bobby Darin. I agree, the song should be retired - or banned.

I read that Sandra Dee -and Doris Day - liked the song, regardless of how inaccurate it was/is. Good for them! They took the high road.

I'll just say this: That the actresses who sing this dreadful song have a slim chance of becoming as iconic as either Dee or Day - very slim.

I never understood why "Grease" was deemed appropriate for teenagers and younger. It has lyrics such as "pussy wagon" (in "Greased Lightening") and "Did she put up a fight?" (in "Summer Nights"). Nothing like a good rape-date joke in a supposedly family-friendly musical.