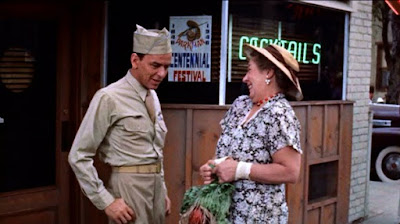 It's long overdue to give a shout-out to Connie Gilchrist. The character actress racked up 120 screen appearances - on both the big screen and little screen - and often had a single scene, such as her brief bit with Frank Sinatra in the early moments of Vincente Minnelli's "Some Came Running..." (1959). And she invariably walked away with the scene in question.

In that particular scene, Connie is caught by Frank leaving a local bar where she just had a beer.  She's plays a cleaning woman who works for Frank's awful brother (Arthur Kennedy), a bigwig in town and its biggest hypocrite who also employs her daughter (Nancy Gates) - and Connie is worried that her boozy afternoon indiscretion at Smitty's could cost both of them their jobs. 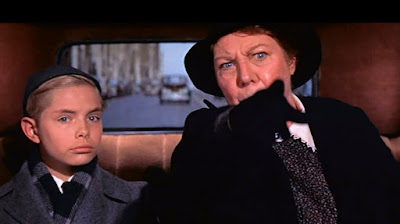 Then there's Morton DaCosta's "Auntie Mame" (1958), in which she was the redoubtable Nora Muldoon who delivers her young charge Patrick (Jan Handzlik) to his madcap relative (Rosalind Russell).  Disapproving and judgmental at first, Nora begrudgingly stays on at Beekman Place to become a part of its crazy world, eventually warming towards Mame.

And Connie was also Gladys Glover's landlady in George Cukor's "It Should Happen to You" (1954), Gladys of course being Judy Holliday.

And throughout her career, Connie managed to look the same, ageless.

She was born in Brooklyn (where else?) in 1901, appeared on stage in France, England and New York and often played Irish (although she was actually cast as Señora Martinez in 1942's "Apache Trail," mother of Donna Reed's Rosalia). Chances are, if you were alive during the 1950s, had a TV or went to the movies, you saw her all the time. Like a family member or friendly neighbor, she was always around. Connie died in '85 at age 84. 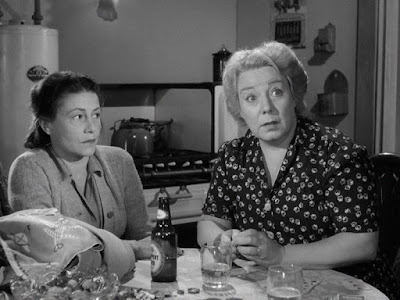 Having a beer with Thelma Ritter in Joseph L. Mankiewicz's "A Letter to Three Wives" (1948).

Thank you for your focus on Connie Gilchrist, a lady I've seen and loved for a long, long time. She and Thelma Ritter (whose name should be typed in gold) were A Wonderful Highlight in A Letter to 3 Wives. Both acted for decades and all but stole the show in each appearance.

I can't watch Lucille Ball's "Mame" for a number of reasons but mostly because they did away with the Nora Muldoon character that Gilchrist played to perfection. Maybe that was a good thing. I can't imagine anyone else in that role. Beyond that, "Mame" is awful in countless way.

She was great as bawdy saloon keeper Purity Pinkerton in "Long John Silver" (both the 1954 movie and subsequent tv series)! That's where she first made an indelible impression on me, bossing Robert Newton around as if in a Robert Louis Stevenson sitcom. Always loved her after that--you tend to faithfully remember the people you see onscreen when you're a kid and follow their careers throughout their lives.

Thanks, Joe. Connie Gilchrist is one of those character actors whose name is rarely invoked by film buffs. I guess that the Hollywood caste system even extends to characters actors - some you hear about all the time, others not so much. And, yes, her Purity Pinkerton characterization is priceless.

This is, to me, when you are at the top of your game. YES! remarkable actress and she was in everything all the time chewing up scene after scene.

So actually Connie was born in 1895. Her daughter, Dorothy, is a client of mine (a spry 94 years old!). She is in an assisted living in Charlotte, NC and I have been taking her to her Dr appointments for the past several months. This afternoon on our way to her appt we were talking about her childhood and that’s when I found out who her mother was! When I pulled up some of the articles about her mom online this afternoon and they said she was born in 1901, Dorothy started laughing and said, “That’s Mom...always lying about her age!” Just thought I would share that little story with you!

Amy- Terrific info and insight. Thanks for sharing. -J