The diminuative thief/killer Lachna (Grace Ford) is the focal point of a scene from Browning's "The Devil-Doll," which features a bravura Lionel Barrymore 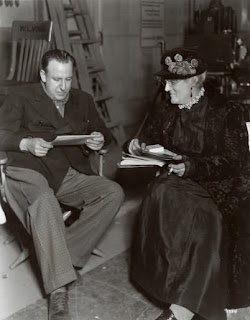 As part of its month-long lead up to Halloween, Turner Classics is screening Tod Browning's sublime 1936 trick, "The Devil-Doll," Saturday morning (October 17) at 7:30 (est). It was his next-to-last movie (his final was "Miracles for Sale" in 1939) but he isn't credited on screen for directing it. There is no directorial credit, in fact.

It is billed only as "A Tod Browning Production"...

Anyway, if you haven't seen it, by all means, watch it. You're in for a treat. If you're familiar with the movie, you might want to pay attention to the material's skeletal similarity to the "Sweeney Todd" legend which was the basis for the acerbic Stephen Sondheim stage musical and the subsequent (and impressively faithful) 2007 Tim Burton film adaptation.

Lionel Barrymore is absolutely masterful as Paul Lavond, a respected Paris banker who, like Sweeney Todd's barber, was set up for a crime he didn't commit and is obsessed with exacting bloody revenge.

Framed for robbery and murder by three of his partners, Paul is sent to Devil's Island from which, after 17 years, he escapes.

He goes on the lam with a fellow escapee, Marcel (Henry B. Walthall), an ailing scientist who has perfected a method to reduce the size of living creatures, humans included. Consumed with revenge, Paul teams up with with Marcel's very creepy and possibly deranged widow, Malita (an entirely memorable, scene-stealing Rafaela Ottiano in the partner-in-crime Mrs. Lovett role), after the scientist dies.

They reduce the young servant girl Lachna (Grace Ford), whose memory is erased in the process, and dispatch her to carry out Paul's deadly deeds. As a doll, she remains inanimate until Paul, using hypnotic thought, instructs her to steal the jewelry of the wife of one of Paul's old associates, paralyzing the associate for good measure. Her first job.

Also, like Sweeney, Paul has a grown daughter (Maureen O'Sullivan) on the sidelines, impoverished and embittered - unaware her father is back.

One of the singular touches of "The Devil-Doll" is the curious conceit that has Barrymore donning a disguise as "Madame Mandelip," the supposed maker of the amazingly, well, lifelike little dolls. This is an idea that could have flopped with a thud, but the legendary actor outdoes himself in his drag scenes, convincingly affecting the voice and movements of a pandering, unctous and vaguely annoying old woman. Brilliant.

It would be a kick to have Drew Barrymore introduce this film one day on Turner. It would be even better if she thought about a remake. I'd go.

Note in Passing: The film's working title was "The Witch of Timbuctoo." Oh, and by the way, its special effects are astonishingly good.

Poster art for the film, and Barrymore in a scene with Robert Graves)

Great movie. Browning's best. I always found something personal about it. I can't pinpoint it, but I think there is more of Browning in this movie than in any other.

For all of his technical brilliance, Browning also had a vivid sense of humor

Ooops. I should have added: ...That he displays in "The Devil Doll."