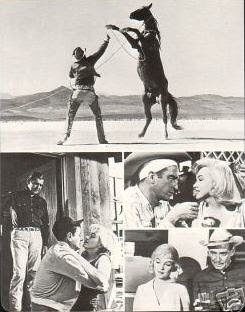 Much has been written about the John Huston-Arthur Miller collaboration, "The Misfits" (1961), for nearly five decades now - initially dismissive stuff, later psycholoigcal analyses of the film and, more recently, a warm, belated understanding of a neglected classic.

The film is many things, I suppose, but to the best of my knowledge, it's never been given its due as a great essay on empathy for animals and, by extension, a potent attack on animal exploitation and cruelty.

Marilyn Monroe's character, Roslyn, is of course sensitive to animals and the treatment of them throughout the film, starting with her reaction to modern-day cowboy Clark Gable's dog and later to his threats to shoot a rabbit. But the film's high point, its pièce de résistance, is the prolonged, monumental mustange hunt that caps the film, as Russell Metty's limber camera follows as a zooming plane and speeding truck brutally chase the horses into exhaustion, after which they are bullied, roped and brought to their knees by Gable and fellow cowboys Eli Wallach and Montgomery Clift.

It's a heartbreaking moment. And is anything more liberating and euphoric than when the ropes binding them are cut and they are set free?

Excellent observation and one that I had not thought about prior to your post.

Joe, that was beautifully written. I also love The Misfits and have to close my eyes when the mustangs are hunted down. I'm thinking of eventually adopting a needy horse.

I could never watch or enjoy this film because of how the horses are treated.

Dick, I agree. I just watched it in full for the first time and am saddened that there weren't humane society members involved at that time. While their treatment may add to the overall theme of unnecessary death and loss, its use of lost on me