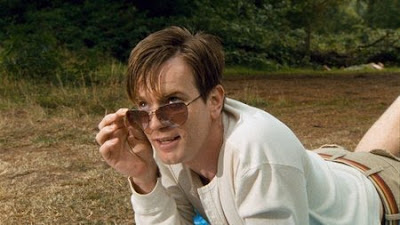 Ewan McGregor is one-half of a couple meditating on life and love in "Scenes of a Sexual Nature."

The vagaries of those films that get released and those that don't never fail to confound me, given the disposable junk that's routinely dumped in the marketplace. 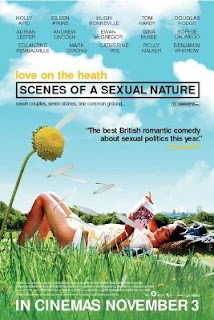 His film set on one afternoon on Hampstead Heath, London, Blum considers the minutiae of seven couples relaxing there and meditating on life and love.

This is Blum's third directorial credit, following a short and a mock documentary on interrogations techniques.

His assorted couples include Ewan McGregor and Douglas Hodge as gay lovers; the great Eileen Atkins and Benjamin Whitrow as an older couple; Gina McKee and Hugh Bonneville as a pair on their first date, a blind date; Andrew Lincoln and Holly Aird as a couple in a stale marriage (his attention distracted by Eglantine Rembauville-Nicolle); Adrian Lester and Catherine Tate as two on the verge of divorce; Sophie Okenedo and Tom Hardy, who have a chance meeting after she's experienced a break-up, and Polly Walker, a working woman negotiating a "deal" with Mark Strong.

A distant relative of "Love Actually," only superior, "Scenes of a Sexual Nature" has smart, observant talk, complicated feelings and the breezy ambience of its green surroundings. It premieres on TMC on Monday, October 19 at 6:25 p.m. (est), with encore performances on Sunday, October 25 at 4:25 a.m. and Tuesday, October 27 at 6:05 p.m.

Note in Passing: McGregor also plays one-half of a gay couple, opposite Jim Carrey, no less, in Glenn Ficarra and John Requa's prison film, "I Love You Phillip Morris," which has been playing the festival circuit. It is set to open limited engagements on 5 February, 2010, going wide on 12 Feb.
Posted by joe baltake at 2:02 PM

This is a good film. I saw it on an airplane flight a couple years ago, but it had a different title - "Scenes in a Park," I think. "Love Actually" was such a popular hit in America that I'm surprised some studio didn't grab this one.

It's as good as tapes. I gotta see this one.

Eglantine Rembauville-Nicolle? Remember when actors used to change their names? I guarantee you in the 50s she would've been Tina Rambo or Tina Nicole. :) Ever since Meryl Streep broke out, all bets are off.

I always thought it started with Sylvester Stallone. Back in the day, he would have been known as Brock Chandler.