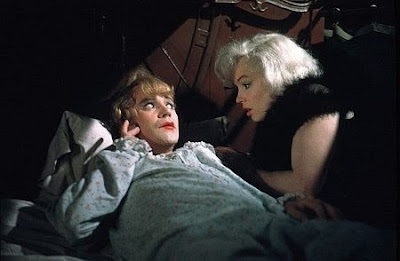 At least, Jack could have said that he actually "slept" with MM and it wouldn't have been completely false

All hail John Timpane of The Philadelphia Inquirer who, in today's installement of the paper's lively Sideshow gossip column, had the cahones to challenge the delusions of grandeur of a former superstar.

The ever-entertaining Tony Curtis, who is offering pre-orders of autographed copies of his upcoming tome, "The Making of Some Like it Hot: My Memories of Marilyn Monroe and the Classic American Movie," now claims (apparently, in the book) that Marilyn, as Timpane so wittily puts it, "miscarried a pregnancy that he (Curtis) helped happen."

Say what? I clearly remember Curtis spending a good part of the past half century, dissing Monroe, with whom is co-starred in the aforementioned "Some Like It Hot" - and often tossing off the highly quotable remark that kissing her was "like kissing Adolf Hitler."

"If you write a memoir, guess you got to say wild and outlandish things about the dead to sell copies," Timpane casually tosses off himself within the venerable Inky. Anyway, Curtis who likened MM to an alpha Nazi, now reveals he not only had an affair with her but fathered her miscarried child. I don't believe him. I'm not saying that he's, well, an exaggerator - just that I don't believe a single word he says on this particular matter.

I've had the same reaction to Ann-Margret's curiously belated admission that she and Elvis had a thing going and Shirley MacLaine's revelation that she and Robert Mitchum were once an item. I ... don't ... believe ... it.

Maybe I should start a rumor about me and, say, (fill in the blank here with the name of any deceased film actress, preferrably born after 1950).
Posted by joe baltake at 6:14 PM

Eh, who knows? People knew how to keep their mouths shut occasionally back then, so I guess anything's possible. It sure took a while for the Clark Gable/Loretta Young love child story to surface.

My favorite alleged affair: Anna Magnani and Al "Grandpa" Lewis of The Munsters. He claims it. The mind boggles.