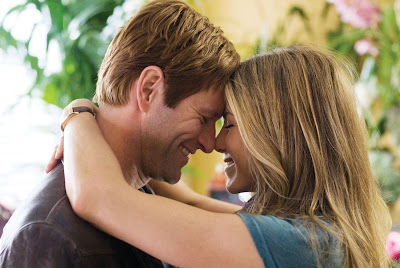 For reasons of commerce exclusively, Brandon Camp's debut film, Love Happens," is being sold as a Jennifer Aniston romcom.

Far from it. It's an Aaron Eckhart dramedy.

Jennifer Aniston may be the most generous screen performer today, something her callous detractors willfully refuse to acknowledge. She was a team player in "He's Just Not That Into You," she indulged a dog (actually many of them) and the dog-eyed Owen Wilson in "Marley and Me" and she stepped back and let the incorrigible Steve Zahn, at long last, have his moment in the spotlight in "Management."

And in each film, she was terrific herself, her role in "Management" possibly being the most fascinating woman's part this year, bar none. 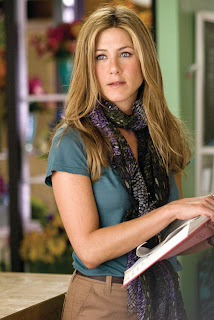 As for "Love Happens," she hands the material - about a self-help guru, newly widowed, who has to learn to help himself - over to Eckhart. Aniston is essentially playing a part that's in support to his star turn here.

It's a serious film. There's nothing romantic or comedic about it. And it works because Eckhart is so commanding as a deeply flawed man. His scenes with Martin Sheen, playing his character's grieving father-in-law, incited my imagination.

I could just see these two as father and son in a remake of "I Never Sang for My Father," played nearly 40 years ago by Melvyn Douglas and Gene Hackman for director Gilbert Cates. And, come to think of it, Aniston would be great in the sister role originally played by Estelle Parsons. I can dream, can't I?

When this film opened and did less business than expected, the press blamed Aniston again. She made one too many romcoms this year, was the main complaint. Too bad the studio didn't sell the film for what it was, but then perhaps it would have done even less business. Thanks for the tip. Now, I want to see it.

The previews got me interested in "Love Happens," but the remarkably bad reviews made me cautious. Now I'm reminding myself that one of my favorite movies of the year, "He's Just Not That Into You," got similarly negative reviews, so maybe I should just make up my own mind. Aniston seems to be a person who is used as an excuse by some critics to work out their own personal issues. I'm not sure why someone gets picked for that uncomfortable role, but I'm happy to see you taking a more reasoned approach to a performer who's done a suprising amount of good work, with too little recognition.

Well said. The movie should have never been sold as a romantic comedy. I was very suprized at the low reviews received, but saw the movie and enjoyed it. As I have posted on Rotten Tomatoes, I gave an 80% rating, mostly for Eckhart's performance. I've recommended to see this movie while it's in the theaters.

love happens is a romantic comedy drama in which jennifer aniston had played a very classic role , I like the movie only because of her and also I made
love happens download in my pc