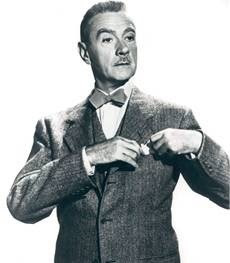 A singular mainstay of the Fox stable of actors, the stage-trained Clifton Webb proved his acting chops in such serious films as Otto Preminger's "Laura" (1944), Edmund Goulding's "The Razor's Edge" (1946) and Jean Negulesco's "Titanic" (1953). And he headed the ensemble casts in two of Negulesco's "three girls" movies - "Woman's World" and "Three Coins in a Fountain," released back-to-back in 1954. Then there were the kid films.

Always the precise curmudgeon in his films, Webb found himself, either by design or accident, in the company of (and at war with) a lot of children in certain titles. Walter Lang's sublime "Sitting Pretty" (1946), the best of the bunch, was so successful that it spawned two sequels - Elliott Nugent's "Mr. Belvedere Goes to College" (1949) and Henry Koster's "Mr. Belvedere Rings the Bell" (1951). Then there was his turn as Frank Bunker Gilbreth, the pioneer of time and motion study, in Lang's popular "Cheaper by the Dozen" (1950), about the sprawling Gilbreth clan (yes, 12 children).

Gilbreth's resistance to all popular culture made him a perfect Clifton Webb character. That film also sired a sequel, Henry Levin's "Belles on Their Toes" (1952), although in this case, given that Gilbreth is deceased, Webb plays only an uncredited cameo. BTW, the script for "Belles on Their Toes" was written by Henry and Phoebe Ephron (Nora's parents) and, yes, "Cheaper by the Dozen" was remade as a bad Steve Martin movie.

Webb made three more kid film for Henry Levin - the very funny "Mr. Scoutmaster" (1953) and two titles based on stage shows, "The Remarkable Mr. Pennypacker" (1959), from the Liam O'Brien play, and "Holiday for Lovers (also '59), from the Ronald Alexander play.

Three for three for the Webb-Levin pairing. But one of those films interests me in particular. 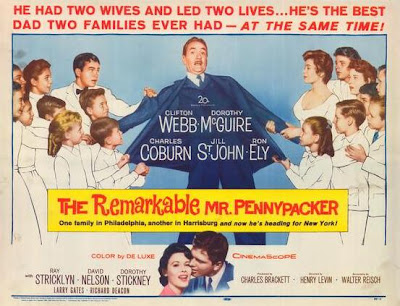 In "The Remarkable Mr. Pennypacker," (1959), Webb got to play for one last time - and to refine - a character he had made his own. For all intents and purposes, by the late '50s, he had become a one-man franchise for Twentieth Century-Fox with his string of family-friendly films.

The movie came towards the end of Webb's career. (He made his last film, Leo McCarey's "Satan Never Sleeps," in 1962 and he died of a heart attack at age 77 in 1966.)  In the delightful "Pennypacker," Webb assumes the role played on stage by Burgess Meredith - that of one Horace Pennypacker, an unrepentent bigamist who has set up two households full of children in both Philadelphia and Harrisburg, shuttling between the two.

What's especially impressive about the film - or rather Levin's pacing of it - is that it isn't the least bit silly, neither hectic nor antic, instead taking its composure from its confident star. The terrific cast includes Dorothy McGuire as Mrs. Pennypacker of Philadelphia, Charles Coburn as Webb's father-in-law (and chief foil) and Jill St. John as one of his older children. (St. John also plays his daughter in "Holiday for Lovers").

The bracingly fey Webb plays an unexpected  bigamist with apparently a strong sexual appetite and 17 - count 'em - 17 children. The actor gets around the questionable qualities of his character by playing it in his standard way - as a resolute, extremely willful, likable free-thinker.

I never saw "The Remarkable Mr. Pennypacker," but "Mr. Scoutmaster" was always a staple of our movie-day at school (always shown on 16mm), so I have fond memories of it. I wish there was a boxed set of Webb's stuff with kids. And I'd love to see "Pennypacker."

Clifton Webb was always fun - and these kid movies, as you put it, certainly sound like fun.

By the way, Satan Never Sleeps used to pop up with some frequency on Fox Movie Channel, though I never remembered to record it. So I guess it still qualifies as yet another "hard to see," for me at least!

Looking for the modern day remake "The Remarkable Mr. Pennypacker." Can't find it. Any suggestions?

Vanessa- That's because there was no remake! -J