☯ the cinematic yin and yang ☯ 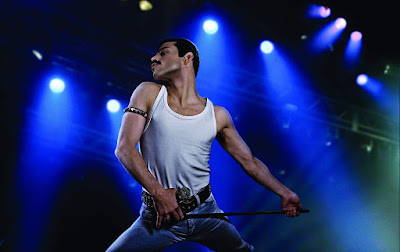 The minute it was announced, the movie seemed to attract unparalleled coverage - and enthusiasm - from the media. Oscar buzz surrounded it early on, sight unseen. There was so much acclaim prior to its release that the subsequent rave reviews seemed almost subdued, anticlimatic.

It was all a bit too much and so, while I approached the film with much anticipation, it left me underwhelmed. Was this because I also bought into the pervasive, unrelenting hype or was the movie simply not that great?

Then there's Bryan Singer's "Bohemian Rhapsody," initially the polar opposite of "A Star Is Born" in terms of luck and entitlement. Its troubled production (Singer was fired two weeks before its completion) was not lost on critics who could not separate its history from the movie they were watching on-screen. I mean, really, it couldn't possibly be any good, right?

Ever the contrarian, I liked "Bohemian Rhapsody." It surprised me. The film handily achieves exactly what evaded "A Star Is Born" - kinetic pacing coupled with old-fashioned storytelling. Also, its performances are uniformly superior to anything in "A Star Is Born." It's unfashionable to say this but Singer deserves the praise that went so freely to Cooper.

Lately, since the awards season began, there's been a reversal of fortune.

"Bohemian Rhapsody," the underdog, has made out unexpectedly well, chalking up several wins, surprising chagrined reviewers. (They seem outraged that a film that they briskly dismissed has been accorded any recognition whatsoever.) Meanwhile, the word "snubbed" seems to have become permanently attached to "A Star Is Born" and Bradley Cooper.

Come Oscar night, it's likely "A Star Is Born" will take home one award.

I was surprised, too, when "Bohemian Rhapsody" took home the Golden Globe over "A Star Is Born" - secretly happy. The Cooper/Gaga love fest was starting to get to me.

Dear Passionate Moviegoer. I wouldn't go see A Star is Born if I had been in it. But I loved Bohemian Rhapsody because I adored Freddy Mercury. Adored. Do you know how many times I've YouTubed Mercury and Montserrat Caballe singing "Barcelona"? I went to his childhood home in Zanzibar. I lived not far from his Design School in Ealing (blue plaque). He was . . Freddy Mercury. k.o.

Yes, "A Star Is Born" seems to be experiencing a sudden backlash. Wonder if there's a story behind it. Hmmm.

I can't explain it but there just seems to be certain movies that people just want to like. I think "A Star Is Born" is one of them. People seem to really like Bradley Cooper. He can do no wrong. The film definitely benefited from his likeability and charisma.

I've observed that when two big films that are similar or of the same genre come out at the same time, one is lauded and the other is dismissed. They rarely receive equal consideration. One is always considered better.

Not to be contrarian, but I find the comparison sort of goofy. ASIB is the fifth version of a well-worn soap opera about a woman who (to quote Maltin about another picture) becomes a rock star in about the time it takes to get a haircut. BR is a biopic (albeit somewhat factually challenged) about a real-life rock band that seldom received respect in relation to its popularity. One is doom-and-gloom almost from the get-go; the other celebrates triumph in the face of adversity. You might as well compare WEST SIDE STORY with FUNNY GIRL.

Joe, "it" needed to be said about those two films, and you said it -- quietly, dispassionately, subtly, but truthfully. Marvin

I just saw ' Bohemian Rhapsody' for the second time, at the Lucas complex screening Room...
huge screen, awesome sound....
loved the movie the first time 3 months ago, and loved it again...
I hope Malik gets best actor...
the concert scenes literally made you feel like you were there...

I get Mike Schlesinger's point, but it's not goofy to compare two films that seem similar or are of the same genre. Yes, "West Side Story" and "Funny Girl" are both musicals. And, yes, there is a difference - they are not the same in any way, except that they are musicals. One can prefer one over the other - "West Side Story" for being more serious and more "important" and "Funny Girl" for being sheer entertainment. You can't really compare them but they can be contrasted. It's the same with "A Star Is Born" and "Bohemian Rhapsody." Both are backstage stories about musicians. One is a fictional soap opera (you could say the same about "West Side Story"), as Mike puts it, and the other is a somewhat fictionalized biopic (you could say the same about "Funny Girl"). It's fair to view and asesss them together, especially since they were both released at the same time.

Brian- I also get Mike's point. It's true. It's futile to compare movies, even two of the same genre. But I wasn't actually doing that. "A Star Is Born" may be well-worn fiction and "Bohemian Rhapsody" maybe revised non-fiction but, from where I sat, they essentially had the same basic narrative goals - i.e., the highs and lows of being a musical performer. But mostly, I was fascinated by the reversal of their Oscar fortunes. "A Star Is Born" was supposed to be the film to beat on awards night, a reward that no one thought to apply to "Bohemian Rhapsody." -J

This is why I love The Passionate Moviegoer," Joe - you understand what was trashed for no plausible reason. "Bohemian Rhapsody" is so much better than "A Narcissist Is Born." An who's to say that it's unfair to compare the two films? That's like telling someone how and what to think! It's your opinion. So compare away. B.H. wins.