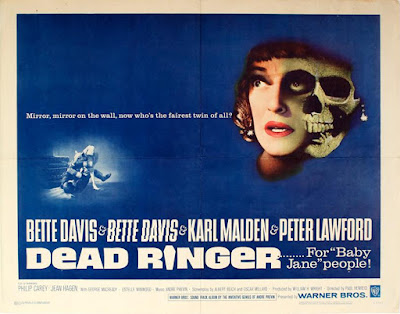 Double features - the pairings of two films - have been my fascination ever since I discovered the seductive power of movies. Now long gone, the double bill was once a ubiquitous mainstay of movie exhibition, was quite popular with audiences and came in assorted configurations.

There were the B-movie double bills, consisting of two genre films (vide SciFi and horror flicks from the 1940s and '50s as examples). Then there were the pairings of two major studio titles, replete with new display ads, for a second run (such as when Warners teamed its two 1962 musicals, "The Music Man" and "Gypsy," early in 1963). And in Philadelphia, there were the "all-day preview" pairings (always on a Wednesday) which brought together a movie that was playing its last day, ending its run, and a new one that was opening that day. This often involved films from competing studios which, surprisingly, cooperated with the idea.

Finally, there are the rep-house double bills, which still exist in larger cities and tend to be inventive. I remember the old Thalia Theater, way up on West 95th street in New York, mischievously pairing "The Virgin Spring" with "Singin' in the Rain." And the programmers at San Francisco's Castro Theater and Los Angeles' The New Beverly Cinema are particularly adept and resourceful with their double features.

That said, today, I'm inaugurating a recurring feature devoted to the double bills that have been rummaging through my mind for decades now. 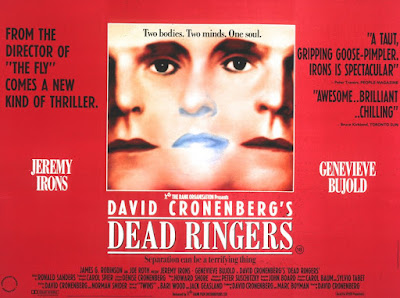 First up:  The pairing of Paul Henreid's "Dead Ringer" (1964) with David Cronenberg's "Dead Ringers" (1988), not just because of the similarity of their titles but because they are among my favorite guilty pleasures.

"Dead Ringer" was casually dismissed the year it was released as a "Baby Jane" rip-off (thanks to Warner Bros.' publicity department making that connection, which is so not true) and is still unfairly underrated. It's a compulsively watchable melodrama with Bette Davis as both a wronged woman and the woman who wronged her - her awful twin sister. 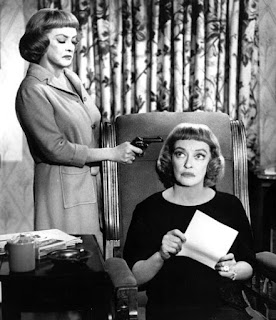 Edie had met the love of her life, see, but he was soon claimed by her evil twin Margaret who, as the film begins, is now his wealthy widow. When Edie attends the funeral of her lost love, she learns that Margaret had lied about having a child who died. But the kid never died; he was non-existent. Because of this deception, Edie decides that Margaret must die. Immediately.

She efficiently murders Margaret, assuming her identity and privileged lifestyle, living off the now-deceased Mr. DeLorca's vast fortune. It's Edie who died, see? But there are complications. For one thing, there's this cop (Karl Malden) snooping around - a cop who was devoted to Edie. And there's the DeLorca dog, an imposing figure who hated evil Margaret but really likes Edie.

Then there's this gigolo (Peter Lawford), Margaret's paramour when the late Mr. DeLorca was still alive, who figures things out and decides to blackmail Edie/Margaret. For starters, he wants a fancy sports car.

"Dead Ringer" reunited Davis with two Warner cronies, cinematographer Ernest Haller, who shot the film in glorious, early '60s black-&-white, and former co-star Henried ("Now, Voyager" and "Deception") who directed with a distinctly old-fashioned touch and a clear generosity with his actors.

Bette is Bette, which is good; Karl Malden shrewdly elects to play his role with such sincerity and nobility that he produces a subtle form of camp, and Peter Lawford, looking well-fed and spoiled, is a hoot as a kept man who intends to remain being kept indefinitely.

The supporting cast is tops - Jean Hagen, Philip Carey, George Macready, Estelle Winwood, Cyril Delevanti, Bert Remsen, Ken Lynch, Henry Beckman, Charles Watts and George Petrie. And Perry Blackwell, who played the piano at the Parisian Room in Los Angeles for several years, provides the jazz piano renditions in the scenes set in the little L. A. bar/club owned by Edie. A touch suggested, perhaps, by the composer of the film's music - André Previn, who also attempted to provide a Max Steiner-type score. But it sounds like ... André Previn. (All his movie stuff sounds alike to me.) 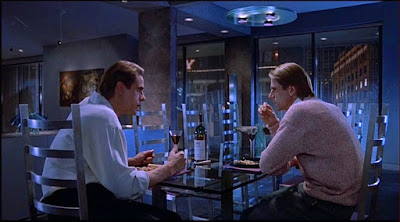 There are also twins in Cronenberg's piece of medical mischief, "Dead Ringers" - twin gynocologists, no less, who can't be told apart and who are played by a very game and very witty Jeremy Irons. Identical twins Beverly and Elliot Mantle are famous and much in demand by the women who patronize them and who are often fooled by them, the scamps.

While Beverly and Elliot may be identical, they couldn't be more dissimilar in personality, with Elliot the more confident, aggressive and dominant of the two. Beverly is is definitely passive and subservient in comparison and often inherits a woman when Elliot tires of the her. For example, they both date an actress named Claire Niveau (Geneviève Bujold) but, like the other women, she's under the impression that she's seeing one man.

The sharing and comparing of women is a noxious plot point and it is upended when the shy Beverly falls in love with Claire. A drug addiction that ensnares both brothers exacerbates their issues and Cronenberg adds to the carefully planned creepiness of his film with the introduction of curious gynocological equipment that the brothers have invented, reported to be friendlier to the female body, and that adds to their fame.

Cronenberg has directed the movie in a fashion that makes it seem as if it is slithering, not just moving, and abetting his distinct vision are the contributions of composer Howard Shore and cinematographer Peter Suschitzky. Visually, the film is drop-dead gorgeous. In tandem with Irons' jaw-dropping one man/two man show, the creators here have made sure that the film is all of one piece. Everyone involved was clearly on the same bizarre wavelength, as if they were, well, conjoined. "Dead Ringers" is that rare movie that is at once difficult to recommend but also a must-see.

Note in Passing: Should I decide to turn my fantasy into a triple bill, I'd gladly add  François Ozon's provocative ”Double Lover”/”L'amont Double" to the mix. It also involves twins. Of sorts.

~exterior shot of the Thalia theater 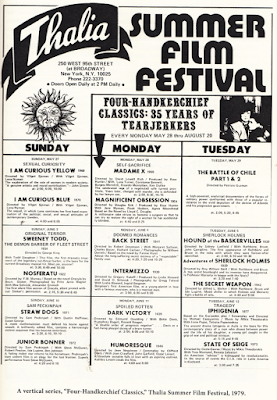 nothing beats a good twin/evil twin flick. Will have to catch Dead Ringer one of these days.

It's one of my favorite movies - yes, a guilty pleasure - and that supporting cast is a treasure trove of great character actors.

There's actually a third Warner reunion in DEAD RINGER--George Chandler, who like Davis was a Warner contract player in the 30s. This was their first film together in 29 years!

Great stuff, Mike! Thanks for the heads up.

Joe, great minds really think alike! DEAD RINGERS is one of my all-time favorite films, and for just the reasons mentioned in your blog. Are you sure that Edie's club/bar is in Los Angeles? I know that her sister (Margaret DeLorca) and her deceased husband live in L.A., but I thought that Edie's bar/club was in San Francisco. How could I clarify this?

m.h. - Try watching the film again. It's rather sketchy in the area of San Francisco/Los Angeles. Yes, it makes reference to Edie living in S.F. for a while, following the betrayal of both her beloved and her sister. My take is that she eventually moved back to L.A., never making contact with her sister until she attends the funeral of said beloved. If you recall, the night that Edie kills Margaret, she summons Margaret to her little bar. Margaret has her limo driver take her there. Within minutes. She meets Edie in her apartment above the club - which is where Edie kills Margaret and then steals her identity. She then takes the limo back to Margaret's Beverly Hills mansion - again,within minutes - and settles in as Margaret. Edie's club/apartment has to be somewhere in L.A. -J

you forgot "A Stolen Life," another Bette Davis film where she played both good and evil twins. Hmmm... wonder if she related somehow?