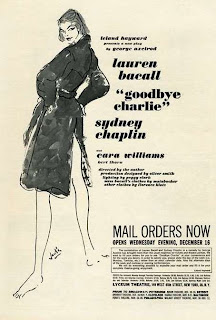 In 1964, Vincente Minnelli took a break from his work at MGM to direct Fox's film version of George Axelrod's 1960 play, "Goodbye Charlie," a deft satire about a notorious womanizer who is murdered and reincarnated as the kind of woman he used to casually exploit and abuse.

Axelrod also directed the play which opened at the Lyceum Theater on December 16th, 1959 and had a brief run, closing on March 19th, 1960.

On stage, the role of Charlie was played by Lauren Bacall (in her Broadway debut), a woman whose beauty was often described as "handsome." Bacall's deep, husky voice was obviously also an asset in the role. 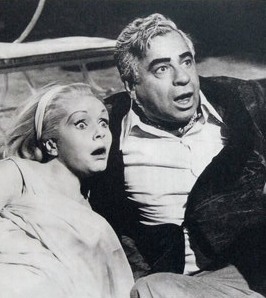 But Minnelli went with the eternally girlish Debbie Reynolds for his film, a less obvious choice but Reynolds' butch mannerisms (and game performance) indirectly added to the piece's scabrous humor.

Tony Curtis (reuniting with Reynolds after Robert Mulligan's "The Rat Race" in 1960) assumed the role played on stage by Sydney Chaplin, and the supporting cast in the movie version includes Pat Boone, Joanna Barnes, Ellen Burstyn (when she was still being billed as Ellen McRae), Laura Devon, Martin Gabel, Roger C. Carmel and, most memorably, a shameless Walter Matthau in one of the hammiest comedy performances on film as a sex-obsessed wastrel named ... Sir Leopold Sartori.

André Previn wrote the kind of bouncy music score for the film that makes one think the material would have been even better as a movie musical.

Note in Passing: A few years ago, Fox Home Entertainment finally released "Goodbye, Charlie" but (like other Fox DVDs at the time) the company used an inferior pan-and-scan version for the transfer, not the original CinemaScope aspect of the original theatrical release. This was a version made up for television syndication in the late 1960s when TVs were boxes with square screens. I remember Dave Kehr being outraged at the time in his New York Times essay on the situation, where he asked, Doesn’t the studio of CinemaScope find this just a little bit embarrassing?

~Reynolds and Walter Matthau in a scene from the film version
~photography: Twentieth Century-Fox 1964©
Posted by joe baltake at 2:52 PM

GOODBYE CHARLIE is a nutty, nutty movie, not just because of the material but because, of its type, it is surprisingly not an impersonal work. Minnelli brought something subterranean to it, something a little off-kilter. When I saw that film in college, I felt Minnelli was playing around with me.

Oooh! I've wanted to see this for so long (ever since I heard my beloved Bobby Darin's version of the title song)!

Joe, Martin GABEL, not Martin Gable (he wasn't related to Clark after all). Marvin

And of course 27 years later, Blake Edwards did a knock-off called "Switch" with Ellen Barkin and Jimmy Smits.

The pan-and-scan era at Fox Home entertainment began shortly after my old nemesis at Sony moved over there. Coincidence? You tell me.