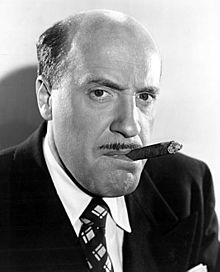 These two marvelous character actors were nothing alike but shared a common link.

Fred Clark. He of the bald head, mustache, grumpy demeanor and penchant for childish petulance. Fred appeared in about 100 films and TV shows and is perhaps best known as the definitive conservative, Mr. Babcock, in "Auntie Mame" (1958) and Betty Grable's older "gentleman friend" in "How to Marry a Millionaire" (1954). 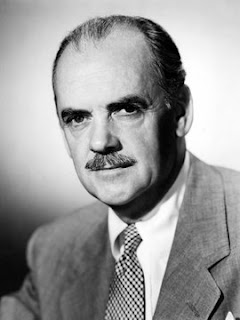 Larry Keating. Balding (as opposed to bald) and also with a mustache. Impeccably groomed, urbane and erudite, Larry was every inch a gentleman. He was in two 1953 backstage musicals, "She's Back on Broadway" and "Give a Girl a Break." No surprise. Larry could have been the prototype for the wealthy, fatherly Broadway producer who believes in his new show and its big star.

Clark and Keating were forever linked by their participation on the "Burns and Allen" TV show in the 1950s. Both played the character of George and Gracie's next-door neighbor, Harry Morton (husband of the Bea Benaderet character, Blanche). Clark was the third actor to play the role and Keating followed him as the fourth and final Harry Morton. The cleverly-staged replacement took place between two episodes of the show's 1953 season.

During this episode, George Burns walks on set and stops the show just before the new Harry's entrance and explains that Clark had left the show to do a Broadway play ("The Teahouse of the August Moon"). Burns then introduces Keating to Benaderet: "This is Larry Keating and he is going to be your husband now." Keating and Benaderet exchange pleasantries and then continue the scene with Harry coming back home to an angry wife.

At the end of the show, Gracie Allen says to Burns: "You know, George, I've been confused all day. There's something entirely different about Harry Morton this week. I finally figured out what it is. He never wore brown shoes before."  And George replies, "Say goodnight, Gracie."

Clark and Keating each brought a different reading to the role of Harry Morton, both memorably so. The two actors would eventually appear together in the 1962 Kim Novak-James Garner comedy, "Boys' Night Out."

For the life of me, I don't understand why Billy Wilder didn't cast these wonderful actors as two of the executives in "The Apartment" (1960).

They would have been perfect, particularly Clark.

Note in Passing: Burns' unorthodox introduction of Keating wasn't the first time he interrupted an episode. He earlier stopped the show when Clark was still in the cast. Amusingly, the actors performing in the scene stopped in mid-gesture and "froze" behind Burns for both occasions.
Posted by joe baltake at 4:28 PM

Fred Clark was a genius - always the same and yet never the same really. A first-class character actor.

It would have been quite appropriate for Fred Clark to have appeared in The Apartment since he played the other "Mr. Sheldrake" for Billy Wilder in Sunset Boulevard.

Kevin! Good point. Which I should have mentioned myself as my wife and I always comment on that whenever we watch "Sunset Boulevard." Many thanks. -J

Joe- I love this feature about character actors. I meant to write in when you profiled Connie Gilchrist, Clark's fellow player from "Auntie Mame." These actors are invaluable.

I am very surprised that they were so "young" when they died (especially Clark at 54). I always thought of both as OLD MEN; then again, I was a lot younger when I thought that. Was there some reason that you didn't mention Clark's hilarious supporting turn in MOVE OVER DARLING?

I'm sorry to hear that Larry and Fred died so young. But I watched George & Gracie every afternoon on CBS because of 2 things: Gracie's bizarre take on events and the times George would stop the show to comment. Usually he did it from his upstairs den, watching the show on TV like the rest of us. This is the first time I've seen him actually interrupt the action. BTW, Hal March was I think the first Harry Morton, but who was the second?