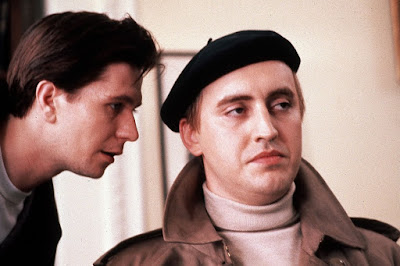 Film producer Sandra Schulberg ("Quills") is also the president and executive director of IndieCollect, which advocates for the heritage of independent film - the documenting, preserving and saving of indies of all stripes. But her current focus is celebrating the strides made by LGBTQ films with an invaluable new research tool, The Queer Cinema Index.

Schulberg's plan is to introduce a database devoted to LGBTQ titles that will aid in the research and vetting of a proposed 12,000 titles. Working with curator Bob Hawk, her gung-ho, optimistic goal is to have 8,000 titles researched and indexed within six months. To accomplish this, Schulberg is crowdsourcing early donations so they can earn a matching grant in early October - which is, like, next week. They are clearly working on a tight deadline. So, quick, check out the link for information on donations.

Given that LGBTQ characters have been portrayed, for better or worse, in films for decades now, a source for researching those characters and films is way overdue. Consider this: Lillian Hellman's ”The Children’s Hour” - the basis for two excellent William Wyler films (one with acute fidelity to the play) and a 2011 London revival (starring Keira Knightley, Elizabeth Moss, Ellen Burstyn and Carol Kane) - opened on Broadway at Maxine Elliott's Theater on November 20th, 1934, close to a jaw-dropping 85 years ago.

So, no, LGBTQ characters haven't been closeted, movie-wise, at all - although, with the advent of independent cinema in the 1980s and the release of such titles as Stephen Frears' "Prick Up Your Ears," James Ivory's "Maurice" and Richard Benner's ”Happy Birthday Gemini,” among many others, one could say that an exhilarating liberation took place.

Now, it's time to index these titles, LGBTQ films both recent and old, famous and unknown, and that's the exact plan that Schulberg and Hawk have in mind. Operating in much the same way as the databases at the American Film Institute (AFI) and the Academy Library, QCI will provide scholars, archivists, programmers and the merely curious with access to countless titles and hopefully a few unexpected discoveries (always a bonus) which, in turn, can initiate revivals and retrospectives and give distributors a strong impetus to invest in restorations and re-releases.

Those moved to make a donation (hopefully before October 1st) will be designated as Founding Sponsors, with acknowledgement as such on the QCI website. Donations are fully tax-deductible and, more to the point, are a way to respond to the current oppressive and intolerant political climate.

So, why be dismayed when one can promote independent and alternative cinema, possibly save a movie and, in some small way, have a voice?

And one can never overestimate the added insight and intimacy that come with new information about a familiar and favored film. You would think that watching movies, non-stop, is enough for the insatiable film buff. Not really. Easily as satisfying is found information about a beloved title - research, the conjoined twin of every all-embracing movie experience.

BTW, if the name Schulberg rings a bell that's because Sandra is the niece of the late writer Budd Schulberg, he of "On the Waterfront," "What Makes Sammy Run?" and "A Face in the Crowd" fame. I wish he were still alive so that he can appreciate/savor the prescience of "A Face in the Crowd."

Note in passing: A quick "thank you" to my friend Michael and his producing partner Catherine for giving me the heads up about QCI.

~the logo for IndieCollect
Posted by joe baltake at 1:17 PM

Wow, what a simple yet great idea. Donating tonight! Thank you for bringing this to light.

Joe, Thanks for sharing. Supporting such a project is important because I believe that film can bring us all together. I don't know how someone can be exposed to the diversity that's represented in today's movies and don't have a broadened outlook on matters. One sees other cultures and lifestyles and can learn from them. Thanks again.

I agree wholeheartedly with Sheila. I never quite understood how a conservative can be a critic for any period of time and remain conservative. Watching movies - non-stop, as you put - has to broaden your perspective and make one more liberal-minded and accepting.

Here's a movie I saw in a theater and never heard about or saw again. It must have been the first "gay" film I ever saw because I never forgot it:"Some of My Best Friends Are"....