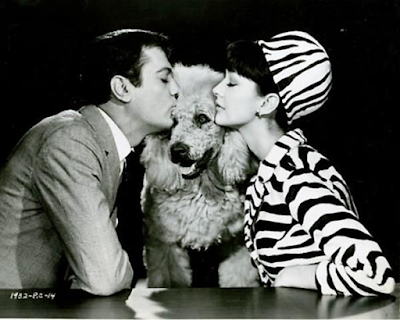 I admit it. I really miss the comedies of the 1960s. Desperately. They were breezy and stress-free and there was nothing mean-spirited about them. Yes, times have changed. Either that, or I've become way too old.

The average modern film comedy leaves one feeling battered and worn out, even the so-called "chick flicks" and romantic comedies. Face it, the romantic comedy died when Meg Ryan illustrated a fake orgasm in the deli sequence of "When Harry Met Sally." And the infamous urgent diarrhea scene (pure guy stuff) in "Bridesmaids" was another discouraging setback.

Today, there is no more exposition - nothing is set up as modern comedies come barreling at us with veritable cattle prods in hand, zapping us every five seconds or so with dubious double-entendrés (the words "penis" and "vagina" are apparently surefire punchlines) and CGI-generated pratfalls.

So what's the problem with all of this?

Most of the time, it simply isn't funny - just strained. Which brings me to two minor gems from the 1960s, both starring Tony Curtis in top form.

1964's "Wild and Wonderful," directed by Michael Anderson ("Around the World in 80 Days," "All the Fine Young Cannibals"), is a nifty take on the eternal triangle. Only in this case, it's a dog - a handsome white standard-size French poodle - that comes between a man and a woman. 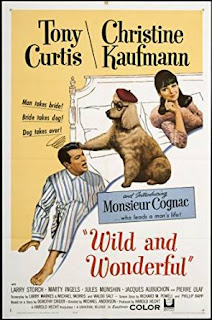 Monsieur Cognac is a national celebrity in France, the star of his own TV show, as well as films, and he's completely in love with his owner Giselle Ponchon (Christine Kaufmann, Curtis's wife at the time), obsessively so. Giselle has an acting career of her own, but Cognac's comes first.

One day, Cognac disappears and goes on a bender. He meets Terry Williams (Curtis), an American musican performing in Paris, and in one of the film's more hilarious scenes, Terry and Cognac go on a wild drinking spree.

True to his name, Cognac loves alcohol. When Giselle tracks down her dog and meets Terry, she falls madly in love - much to Cognac's chagrin. The rest of the film is about how a disapproving Cognac sets up roadblocks for Terry and Giselle, feigning illness and even abuse (supposedly at the hand of Terry) and generally acting out.

"Wild and Wonderful" is effortless fun. George Clooney should do a remake (with Marion Cotillard, perhaps?). And Universal should release the original on DVD already. 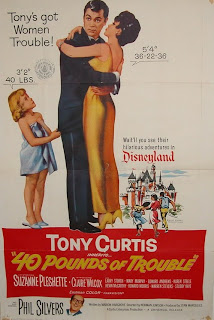 A year earlier, in 1963, Curtis made an affable Universal comedy for a first-time director named Norman Jewison: "40 Pounds of Trouble," about a casino manager who gets stuck with an orphan as a marker.

In Jewison's version of the material, Curtis plays Steve McCluskey who manages a Lake Tahoe casino for Bernie Friedman (Phil Silvers). Steve is trying to juggle the responsibilities of his job with his attempts to evade the private eyes hired by his ex-wife to collect past alimony.

Complicating matters are (1) Bernie's niece, Chris Lockwood (Suzanne Pleshette), who arrives to sing at the casino and who Steve thinks is actually Bernie's mistress, and (2) a 6-year-old named Penny Piper (Claire Wilcox), who has been abandoned by her father who owes the casino money. When Penny's dad ends up dead, the kid ends up with Steve.

This leads to an antic chase through Disneyland, with Steve using Chris and Penny as his little family to ward off his pursuers.

The exceptional supporting cast includes such pros as Silvers, Kevin McCarthy, Howard Morris and Edward Andrews. Better yet, Pleshette matches up well with Curtis - they make a hugely attractive couple - and she also gets to sing here  ("If You," by Sydney Shaw and Mort Lindsey). 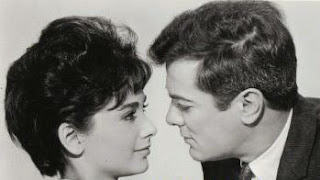 Jewison followed "40 Pounds of Trouble" with Doris Day's "The Thrill of It All," made the same year from a great script by Carl Reiner.

A year later, in '64, Day recruited Jewison for the best of her three comedies twith Rock Hudson, "Send Me No Flowers," based on the short-lived but very funny Norman Barasch-Carroll Moore stage play that starred David Wayne and Nancy Olson during the 1960 theater season.

That said, "40 Pounds of Trouble" is also unavailable on home entertainment. Both films should be taken off whatever shelf on which they've been languishing seemingly for decades at Universal. They'd also be perfect programming for Turner Classic Movies. Hint, hint.

Note in Passing: Thanks to my friend Marvin for sending me a rare VHS copy of "40 Pounds of Trouble," taped off of television when it was still possible to see the film. I'm in heaven.


~Poster art for "Wild and Wonderful"

~Poster art for "40 Pounds of Trouble"

~Tony Curtis and Suzanne Pleshette in "40 Pounds of Trouble"

Down here in Argentina, we love old movies. This is a great one and we are so happy we found your blog.

I was ten years old when I first saw "Wild and Wonderful". I vowed I would own a standard poodle someday. Best pet I ever had, thanks to this movie. SO wish that this was available in DVD. It would be so great to see it again.

I'd love to see the two movies you discussed, since I have soft spot for those 60's comedies. My favorite Tony Curtis 60's film is "Sex and the Single Girl" with Natalie Wood--the mass car chase at the end is so silly, and he even makes a self-referential "Some Like it Hot" joke. Lots of fun.

If I'm not mistaken, I think Tony Curtis was signed to Universal for a period of time in the 50's, although he kept doing work at the studio. They're really good at releasing reasonably priced box sets and I wish they'd do one for him. I have the Jimmy Stewart, Rock Hudson and Preston Sturges sets, and they're all terrific since they include both big and lesser known films.

Rebecca- Yes, Curtis was a Universal contract player for a time and, yes, I agree - a Curtis/Universal box set is long overdue! -J

I have the movie poster for "40 Pounds Of Trouble." Its hung in front of The The Sunny Side Center for New Years showings. I would like more info on the Poster. I can't find one like it anywhere.

Two other Curtis films worth finding are "Boeing, Boeing" (Thelma Ritter is very funny as Curtis' much put-upon housekeeper) and, what I think the sharpest of the lot, "Arrivederci, Baby!" It's wickedly funny!

Oh, Joe, "40 Pounds of Trouble" is so terrific, As I remember, for complicated reasons (maybe the alimony?), Tony Curtis ran a Cal-Neva hotel on the California /Nevada border and couldn't cross over the California line. It was a great gimmick in, as you say, a breezy comedy where the only thing at stake was a laugh.

I've somehow missed these two (and haven't even heard of "Wild and Wonderful"!). I do rather like another Curtis '60s title though, Alexander Mackendrick's "Don't Make Waves."

Speaking of Curtis, I just watched "Sweet Smell of Success" for the first time yesterday. Damn good performance by Curtis.

I've always said the post-PILLOW TALK era was a Silver Age for romantic comedies and would love to curate a series of them somewhere in town. And Rebecca is correct: SEX AND THE SINGLE GIRL is likeliest the best of Curtis' work in this vein--another jewel by the vastly underrated Richard Quine.

Mike- I love the work that Quine did as a contract director at Columbia, but I’m really fascinated by his diverse work away from the studio – “The World of Suzie Wong,” “Hotel,” “Oh Dad, Poor Dad…,” “A Talent for Loving,” “Paris When It sizzles,” “The Moonshine War.” I guess “Synanon” was his last Columbia film, very different for Quine. Not sure if he was under contract for that or came back to do it. And I have a special fondness for “W” and Twiggy’s work in it. -J

I've never seen either of these, but since I agree with you on the state of today's comedies, I will probably enjoy them.

I always enjoy ;40 Pounds Of Trouble. Phil Silvers is good in it. It's out on DVD in the U.K.
Also like Tony in Captain Newman MD

You have an incredibly wide readership here. A reader from Argentina and now another from the United Kingdom? In any event, that says a lot about the quality of your blog and the writing thereon. Not surprising, of course.

Your article discussed two Tony Curtis films but your readers' responses covered many other Curtis comedies and certain of his dramatic roles, as well. That says a lot about Tony's talent.