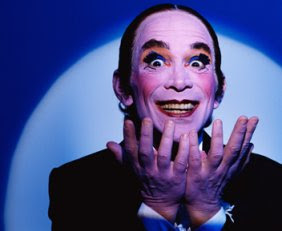 The movie version of "Cabaret" (1972), as recklessly deconstructed by one Bob Fosse, is a film musical for people who don't like film musicals.

Traditionalist friends who are avid fans of the genre tend to frown upon it. That's because it really isn't a musical - not in the traditional sense. True, it has singing and it has Fosse's idiosyncratic choreography, but neither is strictly/seamlessly integrated into the narrative. Its numbers are "staged."

The songs that were sung off-stage in the play were either eliminated or reconfigured for Liza Minnelli to sing on stage at a tawdry little club.

What I'm saying is that "Cabaret" isn't a "book musical" wherein the numbers are required to carry forward the plot and advance character development - you know, where characters simply break out into song.

This is what your average moviegoers doesn't understand or like. While people have no problem suspending disbelief for the brainlessness of comic-book and superhero movies, the idea of one character singing to another is seen as ridiculous. But fantasy is fantasy. There's no difference.

Anyway, the original 1966 stage version of the John Kander-Fred Ebb material was very much a book musical. The songs were strewn throughout the plot and they were sung by various characters. A few were staged as cabaret numbers in the notorious Kit Kat Klub, but only a few.

For their film version, Fosse and company took songs out of the narrative and away from supporting characters and gave them to the supposedly second-rate singer Sally Bowles and the creepy Kit Kat host, known only as Emcee, making them all as grotesquely lurid as possible. It's all "divine decadence!," see? Which Sally is given to shrieking at repeated intervals.

Gone was the musical tradition of songs replacing dialogue to advance the film's plot. Fosse wasn't exactly breaking new ground here. Way back in 1957, director George Sidney and his scenarist Dorothy Kingsley turned the Rodgers and Hart musical,"Pal Joey," into "An Evening with Frank Sinatra."  Except for "Bewitched, Bothered and Bewildered" (which Rita Hayworth lip-syncs to another woman's voice; Hayworth was always dubbed), the songs in "Joey" are performances, sung before an audience.

An iconic Broadway show, finally a film, was no longer a book musical.

Actually, George Cukor's "A Star Is Born" (1954) predates "Joey" by a few years, restricting all its songs to performances either in clubs or on studio soundstages - or, in one scene, in Judy Garland's living room where she "entertains" James Mason, reenacting a musical number she shot that day. "A Star Is Born" is often hailed as a great film musical but it really isn't.

It's a great drama which just happens to have songs.

Rob Marshall's 2002 film of "Chicago" is a shrewd redefining of the book musical.  Yes, characters sing on screen, but all the musical numbers are presented as daydreams, fantasy, a way to make all the singing and dancing palatable for dim audiences.  Again, it's a musical for people who don't like/understand musicals. It's a bastardization of the book musical.

Marshall notwithstanding, the auteur behind "Chicago" was ... Bob Fosse.  But he was dead by the time "Chicago" made it to the screen and, to Marshall's credit, he didn't bother to recreate Fosse's original choreography, sparing us those annoyingly affected dance mannerisms.

"Cabaret" was Fosse's second film as a director, following 1969's "Sweet Charity," which received less-than-charitable reviews. The experience must have convinced Fosse that instead of turning "Cabaret" into another elephantine roadshow musical, he would go the art-house route. 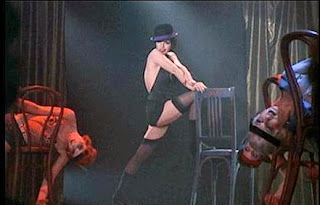 Hiring Liza Minnelli must have seemed like a brilliant strategy, given that she had one foot in Old Hollywood and the other ensconced in the then-Hollywood New Wave (having starred with some success in Alan J. Pakula's "The Sterile Cuckoo").

But she's simply too overpowering for the role of Sally, originally created in the play and film of "I Am a Camera" by Julie Harris and in the Broadway stage version of "Cabaret" by the Harris-like Jill Haworth.

Haworth, with her slight voice, was no great singer, but neither is Sally. Minnelli turned her into a Mermanesque belter, a showstopper. Huh?

There's a great moment in the 2007 documentary "Chris and Don: A Love Story" when the writer Christopher Isherwood attends an advance screening of "Cabaret" with his longtime companion, Don Bachardy.

Isherwood created Sally Bowles. He wrote the 1945 two-part book "The Berlin Stories" (known largely as just "Berlin Stories" for some reason) that was the genesis of "Cabaret." As Bachardy tells it, Isherwood squirmed during the screening, whispering over and over again, "She's ruining it!," every time Liza Minnelli did one of her trademark Liza bits.

Isherwood's book was adapted into "I Am a Camera" in 1951 by John Van Druten ("Bell, Book and Candle" and "Old Acquaintance"), starring Harris, who would also star in the 1955 film version, in turn adapted by John Collier. There's more. Joe Masteroff did the stage-musical adaptation and Jay Presson Allen ("Marnie") is credited with the script for the Fosse film.

For me, a book musical is the only authentic musical, a genre that has been muddied for the past two decades or so.  "Flashdance," "Footloose" and "Dirty Dancing" have all been referred to as musicals.  They aren't.

They're dancicals. Characters don't sing in these movies - they just dance.

So, let's get something straight - a film musical isn't a musical unless its characters burst out into song, and not on a stage or some dream.

Thw great Busby Berkeley epics like GOLDDIGGERS OF 1933 and FOOTLIGHT PARADE only present diegetic musical numbers, too. Do you not consider them "musicals" as well?

I guess not. (I'm impossible. Especially when it comes to film musicals.) I've always referred to his films as Busbys and Berkeleys because his stuff was always unto itself. Absolutely singular. I enjoy them, yes. They're a hoot. But, for me, they're more like extravagantly filmed variety shows or revues. I have a weakness for Robert Z. Leonard's "The Great Ziegfeld" and its jaw-dropping, almost-Berkeley-inspired "A Pretty Girl Is Like a Melody" number. But by my narrow standards, that's not a musical either. (As I said, in this area, I'm impossible.)

Joe, that’s a very spirited defense of the book musical, but I think you are waging a losing battle. It's unlikely that the film musical in its purest sense will ever come back, at least not in our lifetime.

You and me both, Bennett. In his youth, Travolta might have been able to pull it off, given that it was originally (and largely) a dancing role. Maybe Channing Tatum should tackle it!

PAL JOEY as originally conceived (and there is a source, the acerbic John O'Hara novel, which would be dynamite even without the terrific Rogers and Hart songs) could still make a great movie.

always seemed to me a movie more suited to Halloween showings

Joe- I agree with your assessment of the book musical and its importance to overall history of the movie musical in general.

And, yes, I realize that defending the book musical is indeed a lonely limb to be on.

Love your recent blog posts, Joe. I am fortunate to have seen this and WSS on the B'way stage, not the films.

Cabaret . . . hated it. L. Minnelli and York - about as sexy as root canal. Yes, please GO AWAY and don't ever come back to this cabaret!!!

Bob Fosse! He didn't invigorate the musical so much as he damaged it. "Cabaret"? No thanks!

I think it is a very slippery slope here. Think of all the Doris Day musicals. I hardly think that they are "book musicals." They don't seem to ADVANCE THE PLOT at all.

And what about the Rodgers & Hammerstein musicals? Hmmm. I guess THE KING AND I; FLOWER DRUM SONG; OKLAHOMA; CAROUSEL, could be called book musicals because, if I remember correctly, the songs do advance the plots.

Doris Day sung in just about all of her films, even dramas. She would sing the title song over the main credits. But these films cannot be called musicals. She also made “book musicals,” wherein songs are used in lieu of dialogue: “Calamity Jane,” “The Pajama Game,” “Jumbo” and her early Warner films with Gordon MacRae and Gene Nelson. On the other hand, Doris' “Love Me or Leave Me” (like Garland’s “A Star Is Born”) is not a “book musical.” Her songs are all performed in clubs. They aren’t used in dramatic scenes to express feelings, again in place of dialogue. There’s a difference. Yes, the Rodgers and Hammerstein shows that you list are all “book musicals” – that’s all that they wrote.

another great blog that has inspired so many opinions. I never saw the stage version of Cabaret but in my eye there is only one scene that cries out to be a classic from that film. It is the "TOMORROW BELONGS TO ME" number. Extremely effective.

Although I don't share your distaste for "Cabaret" I nonetheless wanted to give you a big kiss on your bushy mustache when you described Fosse's choreography as "annoyingly affected dance mannerisms." It made my heart soar!

Thanks, Jimbo, but my mustache is long gone. And, Joe - yes, "Tomorrow Belongs to Me" is a great moment in "Cabaret," perhaps because it's the only song not sung in that damn club or by Minnelli and Grey.

I agree with you in most ways, but I've gotta point out that Alan Pakula directed THE STERILE CUCKOO.

Ouch! Thanks, Griff. Mulligan directed so many of the Pakula-Mulligan films that I forgot that "The Sterile Cuckoo" was Pakula's first as a director after a career of producding. It's been corrected. Thanks again. -J