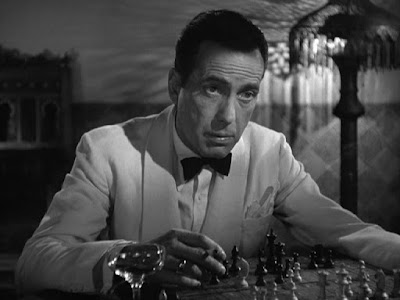 As I said in my initial piece in this series, there are certain films that movie critics and film buffs are supposed to like. It's almost obligatory if you seriously want to belong to The Club. None more so than "Casablanca."

This 1942 Michael Curtiz film has become the litmus test to weed out those who really aren't dedicated movie aficionados at all. Anyone who doesn't like it (or "Citizen Kane," for that matter) becomes immediately suspect.

Well, I don't like it although, heaven knows, I've tried repeatedly to fall in line and experience the wonder of this political romance about love and conscience and the Nazis. I've gone into innumerable rep houses during my lifetime and forced myself to drink the filmic equivalent of kool aid, but to little avail. I suppose that I'm deficient because I just can't get into it.

There I said it: I. Just. Can't. Get. Into. It. It's that simple, although for the longest time, I couldn't understand why, given that it is adored by so many people and revered by professionals who probably know more than I do.

Consequently, this essay will be short and (relatively) sweet because I really can't think of much to say about Curtiz's much-loved "classic."

Each time I've experienced it, I'd sit there and then my mind would start to wander. Instead of "reading" the film, I'd find myself making mental notes about what I have to do afterwards - call my wife, pick up the dry cleaning, get the car washed. You know the drill.  Meanwhile, the film on-screen was being ignored. I'd wager that I've tried watching "Casablanca" more than a dozen times but I'm lucky if I make it to the movie's middle.

Belatedly, I've reasoned that my reaction has something to do with a resistance to the film's star, Humphrey Bogart (he of the clenched teeth), and his rather stiff acting style, which isn't very companionable or natural.

Frankly, Bogart's iconic stature as an actor has always baffled me.

Again, I just don't get it - either him or his film. However, I'm sure there will be many more attempted viewings of "Casablanca" in my future.

From what I've read, "Casablanca" was something of a fluke. No one associated with it, especially the studio, expected much from it. It was just another movie on the Warner slate, despite the starry cast. It's one of those movies whose reputation has grown decade after decade. A self-made hit.

My problem with the film, as mentioned earlier, is the love story, specifically the dopey dialogue Bergman has to deliver: "Is that cannon fire or my heart pounding?" I keep hoping Bogie will respond imitating Groucho: "Naw, it's me. I'm always that way after I eat Mexican. Say, you're a pretty hot tamale yourself." I much prefer TO HAVE AND HAVE NOT, which is Howard Hawks' version of the story; compare that Bergman line to Bacall's whens she sees Bogie carrying a passed-out Dolores Moran: "Whatta ya tryin' to do, guess her weight?" Now THAT'S great writing!

And of course there's ALL THROUGH THE NIGHT, which is basically a comedic take on the whole affair.

Thanks, Mike. No contest here. I agree wholeheartedly with you about Hawks' "To Have and Have Not" and its spirited dialogue. I'll have to watch "All Through the Night" again. Haven't seen it in years and was only vaguely aware of its connection to "Casablanca." Terrific movie-history lesson.

I am no Casablanca fan, either. The people I know who name it as their favorite film are not adventurous movie-goers (The Shawshank Redemption crowd). I always thought it was curious, considering the films appeal on initial release and its Oscar victory, that Bogart and Bergman were never teamed again. If I may add to the blasphemy - Regarding To Have and Have Not, I much prefer the remake, The Breaking Point, with John Garfield and Patricia Neal. And it was directed by... Michael Curtiz!

Once again, great minds think alike on this film. You make mental lists of what to do after the film is over. I just fall asleep, pure and simple.

I once wrote a column about "Casablanca" revealing it to be a gay film - much as "Ben-Hur" was. Ingrid was the beard for Bogey, Henried - probably Sam as well. Not to mention the relationship between Lorre and Greenstreet. The whole setup was the real love affair: Claude and Bogey walk into the sunset.

Once again, great minds think alike on this film. You make mental lists of what to do after the film is over. I just fall asleep, pure and simple.

Great work, Joe. I'll add that i went through a Bogart period during which I never missed one of his movies on TV - until it came to "Casablanca." That ended my insanity.I

It never improves...its mid-section never gets any better (right now I can barely recall what happens after the flashback)...the Letters of Transit never get more compelling, no matter how many times they are discussed.

I have a theory on "Casablanca." I never even heard of the film before Woody Allen's "Play it Again Sam" turned it into an icon. While it may have been a hit upon its release in 1942, "Casablanca" was for most of us never more than a charming old movie on the late show. That's where it lingered for decades until the Bogart fetishests in the '60's seized on it at the revival houses. Add Allen's play, and then movie, as the seal of approval of what all the hip kids were watching and suddenly we have this unassuming film anointed as greatest movie ever made for all to worship.

Marc, you summed up my feelings exactly and, Jimbo, your Woody Allen theory never occurred to me but it makes sense. I believe that it certainly added to the mystique of "Casablanca."

I can take a bit of pride in being the first person to book "Casablanca" and "Play It Again, Sam" as a double feature back in 1973 at the long-gone 20th Century in Cincinnati. (Prior to that, Paramount wouldn't sell "Sam" at a flat rate; it wasn't easy getting them to agree to it.) I'll never forget when "Sam" started. If you know the film, it opens cold (no logo) with a clip from "Casablanca." The audience freaked, thinking the projectionist had threaded up the wrong reel!

Bogie teaches men disappointed in love to turn to the bottle. Sad!

Really liking the theme of these blogs - hope you're continuing on with it.