white, or lacking in color 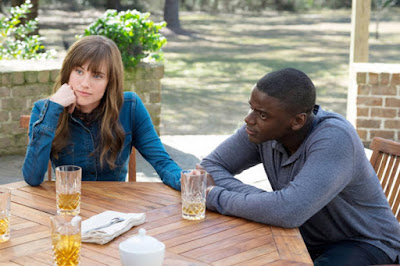 At long last. It may have taken 50 years but someone finally has taken the race-relations premise of "Guess Who's Coming to Dinner" and turned that unsatisfying vanilla film inside-out, finding equal parts of humor and horror in the notion of a privileged white girl bringing her black boyfriend home to meet to her progressive (read: liberal) parents on their sprawling estate.

That someone is Jordan Peele, the talented comedian best known for his companionable partnership with Keegan-Michael Key.  "Get Out" is Peele's directorial debut, an astonishing one - something of a major achievement for a first feature. It is at once a tense thriller, a subversive comedy and a bracing social commentary, a combination which is easy to recommend (and with some enthusiasm) but, frankly, rather tricky to review.

Carefully constructed, intelligent and thought-provoking, "Get Out" is one of the most original films in ages. I love the idea of a movie about the very real danger that white people pose to blacks, particularly given that whites have feared and conveniently demonized blacks (and often without good reason) for decades, a bigotry that's become more transparent, palpable and apparently acceptable during the past eight years.

An early scene depicts a moment that is now naggingly familiar to us all - a white cop approaching a car containing a black man.  But Chris (Daniel Kaluuya), a photographer from New York, isn't the driver of the car.  He's its passenger.  The car was being driven by his white girlfriend Rose (Allison Williams) who had an accident when a deer darted across a back road. Doesn't matter however. The cop wants to see Chris' identification.

"That's bullshit!," Rose snaps. The cop backs off and drives away. But, given disturbing news stories from the past few years, one can only imagine what would have happened if it was Chris who challenged the cop.

It's an unsettling start, to say the very least, and it's exacerbated in an unthinkable way when Rose and Chris arrive at her parents' palatial manse in an unnamed suburb that reeks of exclusivity and restriction.

You half expect to encounter a welcome sign that reads "Whites Only" - except for the domestic help, of course. Dean and Missy (yes, that's what she calls herself), Rose's parents, have two curiously subdued blacks on staff, a grounds keeper named Walter (Marcus Henderson) and a maid named Georgina (Betty Gabriel, excellent), brought on to care to Dean's ailing father and mother and who stayed after the two elders passed.

"I couldn't let them go," Dean explains to Chris, a line that takes on deeper meaning as the film progresses. He later comments something about how much he enjoys experiencing "another person's culture."

I should mention at this juncture that Dean (Bradley Whitford) is a neurosurgeon and Missy (Catherine Keener) is a psychotherapist - two occupations that drive the film into increasingly uncomfortable places - and then I should say no more. A continuing synopsis would be a huge spoiler.

However, I will add that Peele stages a bravura sequence involving Dean and Missy's annual outdoor party and the creepy white people who attend every year, all of whom have pretensions and awkwardly patronize Chris.

It's a moment that handily defines the film's title.

Much of the film's humor comes from a character named Rod (Lil Rel Howery, in a scene-stealling performance), Chris's best friend back in New York who works conveniently as a T.S.A. officer and was concerned about Chris heading out into the unknown with Rose. Meanwhile, the film's tension escalates with the arrival of her brother, Jeremy (Caleb Landry Jones), a medical student who is also something of a loose cannon.

As for the social commentary of "Get Out," one doesn't expect a trip to the suburbs and a lawn party to morph into an urgent message on the on-going shameful and unconscionable exploitation of black people (will it ever stop?), with sly references to slavery added. But something is amiss.

How and what Peele accomplishes in his film will not be revealed here.

No, it's something that can be experienced only first-hand. And should be.

Note in Passing: Mention should be made of the first-rate work of cinematographer Toby Oliver, editor Gregory Plotkin and particularly composer Michael Abels who wrote the kind of background/mood score that can be appreciated and enjoyed apart from the film itself.

Great review... Moving this film way up on the 'must-see' list...

Thanks for the excellent review,Joe. "Get Out" takes a hard look at some facts of life, yet it is not of realistic situations but those more in keeping with a generic film. Still it has well-observed psychological touches, which makes it attractive to two distinctly different audiences. Yes, a major film.

Joe- A most worthy a review of a surprisingly great movie.

Joe, your review of my favorite American movie so far this year is wonderful. Thanks for the piece, and thanks especially for bringing readers’ attention to this work by Peele.

"Get Out" is probably the most pertinent film of the moment. I admire Peele's erudite take on current race relations. It's well-said and much-needed