Please release me, let me go: Harve Foster and Wilfred Jackson's "Song of the South" (1946) 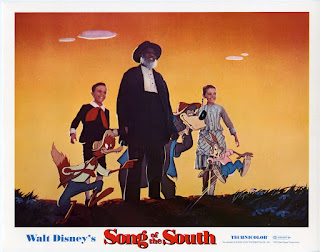 A few weeks ago, in anticipation of Disney's half-live action, half-animation redo of its 1991 animated musical, "Beauty and the Beast," Entertainment Weekly, in its usual penchant for overkill, published an extensive spread on all the great/memorable/iconic songs to come from Disney films.

Conspicuously missing was "Zip-A-Dee-Doo-Dah" from "Song of the South" (1946), a film that has become something of a problem for Disney for racial reasons (whether true or not) and that subsequently is now a lost movie.  I understand Disney's stance but really can't rationalize why Entertainment Weekly would ostracize the song from its coverage.

Movies are demonized for the most facile reasons and "Song of the South," directed by Harve Foster and Wilfred Jackson, has been treated as the studio's bastard child far too long. It deserves studio reappraisal by now, given that the complaints about it date way back to the 1970s.

There's nothing wrong with it.

No, at least not in terms of sociology and race. Nevertheless, it remains perhaps the only Disney title that has never been hyped to death as a DVD "Disney treasure" ensconced within the legendary "Disney vault."

To say that it's been ostracized or suppressed or that it has become Disney's pariah is putting it mildly.

What's weird is that Busby Berkeley's genuinely offensive "Babes on Broadway" (1942), replete with Mickey and Judy in blackface for their jaw-dropping "Waiting for the Robert E. Lee" finale, is an MGM favorite and a Turner Classics staple, screened (way too often as far as I'm concerned) with nary a complaint - as are David Butler's "My Wild Irish Rose" (1947) and James Whales' original "Show Boat" (1936), with Irene Dunne (of all people) in blackface. 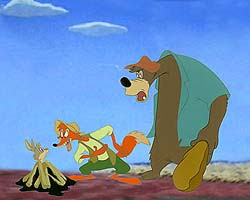 For the record, "Song of the South" - the original half-live action, half-animation attempt - is about how Uncle Remus (played by James Baskett) uses his tales of Brer Rabbit to help a little boy (Bobby Driscoll) handle his parents' separation and his new life on a plantation. Remus' tales include "The Briar Patch," "The Tar Baby" and "Brer Rabbit's Laughing Place," which come alive in sparkling, charming animation - and a great deal of wit.

Back in 2007, critic Sam Adams pointed out in Philadelphia's City Paper, that "rumors circulated in 1996 and again last year that the movie might finally be committed to disc, but after publicly hemming and hawing over a period of months, Disney announced there were no plans to release 'Song of the South' in any form." There's only one word for such behavior:

Release it already, preferably with someone credible, say Whoopi Goldberg, asking (as she did for Warners' racially-based cartoons) - exactly what all the fuss is about? Or maybe Oprah might want to sign in on this.  Or Tyler Perry or Lee Daniels or Spike Lee.  Someone with credentials would have to endorse it if its reputation proves to be unfounded.  But first Disney would have to screen it for these people.

Really, the punishment has to end already.
Posted by joe baltake at 3:38 PM

It would make perfect sense for them to release Song of the South as a 2-disc Walt Disney Treasures collection, at a premium price, eschewing the major ad campaign that would inevitably draw protests. Nobody was protesting outside the Kino offices when Birth of a Nation was rereleased, because they put together a disc that put everything in its proper context. Same for the offensive Looney Tunes and Disney shorts. Yes, it wouldn't bring in as much dough as a full-scale Jungle Book style reissue, but a little money in the bank is surely better than nothing?

Funny how Disney used the cartoon characters from the film in their "Splash Mountain" ride and yet they won't release the film.

Isn't their reluctance to release "Song of the South" interesting?

I've seen it too, and it certainly seems quaint by the standards of some of the outrageous stuff today

I happen to love that movie!

You're rare, Michael. You have good taste! -J

Saw this film in the theater as a child and have very fond memories of it . I will probably past away before it is ever released.

This is an ongoing discussion and the idea of contectualizing it by respected African American scholars and film people makes sense. It isn't as if Disney doesn't make "statements." Their industry-leading LGBT (and easily weathering the BEAUTY & THE BEAST "gay" controversy) and diversity policies would lead us to believe they could figure out how to bring SONG OF THE SOUTH to audiences. But that sensitivity may also be what keeps it down. Plus the fact that there is not a large amount of money to be made. You pick your battles.

I know Leonard Maltin would love to see SONG play on TCM where he hosts the Disney classics and could easily have appropriate celebrities discuss it with him. No doubt TCM would love this---and to show it at their Festival. It is Disney that must be convinced. Would Cheryl Boone-Issacs, the African American President of The Academy endorse it? Could be interesting.

What the NAACP said about Song of the South
"The National Association for the Advancement of Colored People recognizes in "Song of the South" remarkable artistic merit in the music and in the combination of living actors and the cartoon technique. It regrets, however, that in an effort neither to offend audiences in the north or south, the production helps to perpetuate a dangerously glorified picture of slavery. Making use of the beautiful Uncle Remus folklore, "Song of the South" unfortunately gives the impression of an idyllic master-slave relationship which is a distortion of the facts."
Walter Francis White, Executive Secretary, NAACP 1946

Years ago I bought the legal Japanese laser disc and subsequent DVD pressings. There are bootlegs easily available and some claim to be frame-by-frame restored. There are some excellent extras included in many. Carefully look at these listings: https://www.google.com/search?

By the way, when I played GONE WITH THE WIND at the UC Theatre in Berkeley in the late 1970s Whoopi Goldberg introduced it with brilliant thought-provoking comments that allowed the audience to enjoy the pleasures of the movie while looking at the both subtle and obvious impact stereotypes in the media can have of both Black and other viewers. See the end credits for Spike Lee's BAMBOOZLED and more powerfully the current doc I AM NOT YOUR NEGRO.

Gary! Terrific insight. Invaluable. Many thanks. I think we both agree that "Song" would need a credible African-American endorsement for Disney to even entertain the thought of doing anything with it on home entertainment. -J