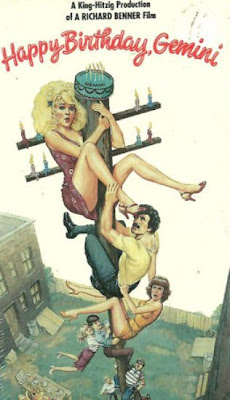 The late Richard Benner, who died in 1990, was a promising Canadian filmmaker who, for reasons unknown, directed only three movies.

He broke through in 1977 with the hugely entertaining "Outrageous!," a drag-queen farce driven by fine-tuned, yet comic, turns by the cross-dressing Craig Russell (who also died in 1990), the fetching Hollis McLaren, reliable Helen Shaver and the cult filmmaker Allan Moyle ("Pump Up the Volume" and "Empire Records"). A decade later, Benner made the less-successful sequel, "Too Outrageous!," and that was that.

End of film career; onward to TV, which also lasted only briefly.

In-between his two Russell farces, however, Benner made his best, most assured film - 1980's "Happy Birthday, Gemini," based on the Albert Innaurato stage comedy that was simply titled "Gemini" when it was staged off-Broadway twice within a year - first by Playwrights Horizons in December 1976 and then by the Circle Repertory in March 1977 - and again on Broadway in May 1977. To call Innaurato's piece "audience-friendly" was an understatment. It was irresistible, playing a whopping 1,819 performances on Broadway. Sigourney Weaver, Danny Aiello and Robert Picardo were among the cast in its various stage incarnations.

In those days, a successful stage comedy was automatically snapped up for the screen (not any more!) and when United Artists decided to film it, the project was handed to Benner on the basis of "Outrageous!"

Essentially a backyard comedy, set among row houses in South Philadelphia, "Happy Birthday, Gemini" revolves around the 21st birthday celebration of one Francis Geminiani - played on stage by Picardo and in the film by Alan Rosenberg - a gay kid who had the misfortune to grow up in a rough-hewn neighborhood. An antic comedy of manners ensues as various friends, relatives and neighbors crowd their way in, making a lot of arm-flailing, neurosis-revealing commotion.

These include Francis's father, Nick (Robert Viharo), and his girlfriend, Lucille (Rita Moreno); next-door neighbor Bunny Weinberger (Madeline Kahn) and her obese son Herschel (Timothy Jenkins), and Francis's classmates from Harvard, the twins Judith Hastings (Sarah Holcomb) and Randy Hastings (David Marshall Grant). It's like this - Sarah has a crush on Francis, who in turn has a crush on Randy.

Blessed with this pleasing cast, Benner almost effortlessly whipped up a most companionable film. The three young leads, all new at the time, are especially good. Rosenberg and Grant both went on to have modest acting careers in film and television, with Grant branching off into producing and writing and Rosenberg occasionally directing for TV. But one has to grieve the sudden, unexpected disappearance of Holcomb, who debuted in 1978 in "Animal House," had a commanding dramatic role in "Walk Proud" a year later, and was most fetching in "Caddyshack," made in 1980, the same year as "Gemini." Four films in three years and then ... nothing.  She apparently dropped out.  Where is Sarah Holcolmb? A major loss.

Anchoring the film with appropriately diva-like performances are Moreno and the late Kahn, both old pros whose bravura work here should have elevated Benner's pleasing little comedy to near-classic status. As a film, it certainly deserved as large an audience as its stage source attracted.
Posted by joe baltake at 6:49 PM

Yes, Benner, one of the great optimists in the cinema, had a tragically short career. But his work could also be perceived as pessimistic or even cynical because he stripped from it the sentimentality and mawkishness that many filmmakers traffic in.

Never heard of this movie. Thanks for the heads up. Sounds like my kinda film. The combo of Madeline Kahn and Rita Moreno is irresistible

HAPPY BIRTHDAY GEMINI is available on streaming NETFLIX. Very wonderfully obscure or impossible to find films are showing up there including THE RAT RACE, SYLVIA, THE MUSIC LOVERS, WHO'S BEEN SLEEPING IN MY BED, LOOKING FOR MR GOODBAR in HD, PHAEDRA, THE KEEP, WHO'S MINDING THE STORE?, THE PIGEON THAT TOOK ROME, THE CEREMONY, THE HAPPY ENDING, THE CHRISTINE JORGENSON STORY and lots more!

Obscure titles, indeed. Thanks for the heads up!