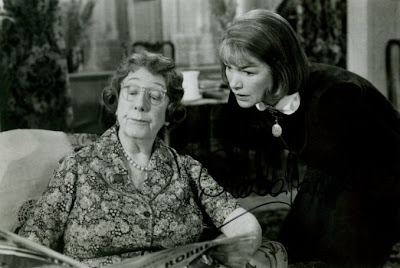 Jackson with Washbourne, wearing the flowered dress that Jackson's Stevie wittily describes as "they all came up." 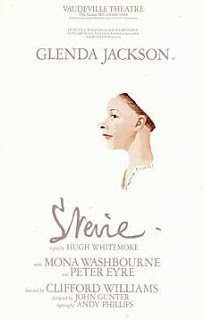 Robert Enders' endearing "Stevie" (1978), adapted by Hugh Whitemore from his West End stage play, is essentially a precise acting duet between two titans of the British stage and cinema, Glenda Jackson and Mona Washbourne, respectively playing the poet Stevie Smith and her beloved aunt (who remains agreeably nameless throughout).

Yes, the piece is stagebound but also, somehow, surprisingly cinematic because Enders (a novice filmmaker at the time who worked largely as a producer) fills his movie with a sharp array of words - the tricky, observant wordplay of Smith's poetry (which Jackson reads directly into the camera at intervals) and Whitemore's affectionate imagination of the bracingly articulate conversations between Smith and her aunt, who lived together.

Through all the talk we come to know Stevie and her emotional problems.

All of this is staged in a cozy cottage designed by John Lageu and photographed by Freddie Young with an eye for the prevading warmth of the central relationship and Stevie's work.

There's a third character on the periphery - Freddy, a close friend played on stage by Peter Eyre and in the film by Alec McGowen - as well a Stevie as a child (Emma Louise Fox) who appears in flashbacks, moments that were only spoken about on stage. The addition of the flashbacks, as well as a narrator for the film (courtesy of Trevor Howard's marvelously sonorous intonations), are the only filmic compromises made by Enders, whose fidelity to the piece's frail nature is remarkable and admirable.

"Stevie" remains the only film directed by Enders, who died in 2007. His film was picked up for American distribution by First Artists, a fledgling company which had a short life in the late 1970s and which had little faith in "Stevie." It opened the film for two weeks in Los Angeles in 1978 and then promptly shelved it. Two years later, when First Artists was long gone, Enders bought back his film and opened it on the East Coast in 1980, where it was a huge hit with the critics and art-house patrons.

Other limited engagements in other cities followed.

It was made available on home entertainment in Great Britain, but never here. "Stevie" remains a lost film.

Note in Passing: Because of her film's irregular release pattern, Jackson never received the Oscar nomination that she so fully deserved. But the Golden Globes honored her and Washbourne in 1979 and both the National Board of Review and the New York Film Critics Circle Awards gave the best actress and supporting actress awards to Jackson and Washbourne in 1981. Washbourne, who died in 1988 at age 84, was honored by the Los Angeles Film Critics Association Awards in 1978 as supporting actress.

"Not Waving but Drowning"

"Nobody heard him, the dead man,
But still he lay moaning;
I was much further out than you thought
And not waving but drowning

"Poor chap, he always loved larking
And now he's dead
It must have been too cold for him his heart gave way,
They said.

"Oh, no no no, it was too cold always
(Still the dead one lay moaning)
I was much too far out all my life
And not waving but drowning."

I love that movie and also have a book of poems.

I can still recall seeing a clip of Jackson reciting one of Smith's poems directly into the camera on an episode of "Ebert & Siskel At the Movies." Even if that was in connection with the later release, it still means I can picture that scene after three decades, having seen it once.

Wonderful film. It is definitely "lost", though I have a VHS copy from many years ago and I believe the old, no-commercials Bravo channel also ran it a few times, though they bleeped a few words, if you can believe it. I managed to take several friends during its brief run in Los Angeles - one friend brought along George Cukor, so I can always brag that I went to the movies once with Cukor - even though I did not really know him. He loved the film, and had worked with Mona Washbourne before, of course.

Randall! Thanks for the lovely reminiscence.

A DVD release of ISADORA would also be nice; maybe a "Director's Cut" on Disc 1 and the original, longer, 1968 release on Disc 2? Also, in our spare time we can find the lost footage to GREED, THE MAGNIFICENT AMBERSONS, and - as long as we are wishing - the 3 hour plus preview version of A STAR IS BORN that was previewed in mid 1954. About 15 minutes longer than the original release, which was cut still further.

Let's also find the rest of the Elizabeth Taylor CLEOPATRA while we are at it.

Randall- Great minds think alike. I wrote about "Isadora" in all its incarnations just about a year ago. Here's the link if you care to peruse it:

I never thought that much of STEVIE. In fact, I think that I have seen it twice!

You can watch it on Amazon prime. And also short video excerpts. Sunday Bloody Sunday is one of my favorite movies.