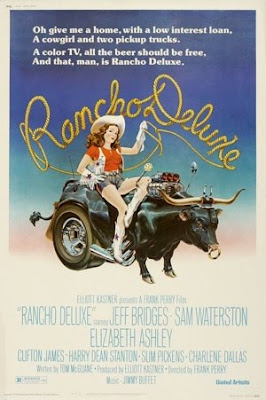 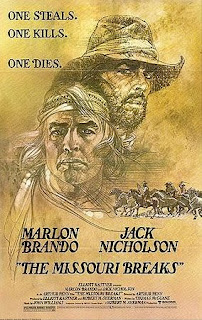 A good writer is a magician of sorts, a fabulist who can make the trite seem, well, fabulous.

Thomas McGuane certainly qualifies as a good writer and, back in the 1970s, he produced two scripts seemingly married to the same essential plotline.

Released a year apart, Frank Perry's "Rancho DeLuxe" (1975) and Arthur Penn's "The Missouri Breaks" (1976) are both original scripts about cattle rustlers and land barons. Both are Westerns but the former is modern, comedic and, at 93 minutes, rather breezy, while the latter is darker, more traditional and, at 126 minutes, something of a trial to sit through.

While it's never been acknowledged that both are based on the same material, it's compelling to compare and contrast, observing how McGuane creatively moved his pieces - his characters - around, changing relationships while adhering to a tale told twice. Here goes...

In "Rancho DeLuxe," Jeff Bridges and Sam Waterston play two contemporary cattle rustlers who, perhaps unwisely, set their sights on the livestock of the newly transplanted Clifton James and wife Elizabeth Ashley, who came to Montana from Scehnectady, New York.

In "The Missouri Breaks," Jack Nicholson leads a cattle-rustling ring and decides - again, perhaps unwisely - to take on cattle baron John McLiam, a widower with a grown daughter, played by Kathleen Lloyd.

In "Rancho DeLuxe," James hires pokey old Slim Pickens to ensnare rustlers Bridges and Waterston. Traveling with Pickens is his niece, Charlene Dallas, who is what James Agee would have called "a dish." Ah, but Pickens and Dallas are not exactly what they seem to be.

In "The Missouri Breaks," McLiam hires Marlon Brando, a cattle-rustling regulator with an eccentric way of handling the job. He dons disguises to dispatch his unfortunate prey. In both films, the hired hand recruited to entrap the rustlers engages in a kind of play-acting. Both Pickens and Brando play characters who consider their line of work a "sport," approaching it in highly theatrical ways that are not all that dissimilar.

In terms of "love interest," in "The Missouri Breaks," Nicholson forges a relationship with Lloyd, while in "Rancho DeLuxe," one of James' goons, played by Harry Dean Stanton, becomes smitten with Dallas. (Note in Passing: Richard Bright plays James' other goon - Burt to Stanton's Curt.)

In both cases, the romance is doomed by deceit and betrayal.

The respective endings is what sets the two films apart. "The Missouri Breaks" ends on a note that's bloodier than anything that preceded it, as difficult as that is to image." "Rancho DeLuxe," on the the other hand, ends without violence, with the two heroes rather blissfully in jail, a dénouement that, oddly enough, recalls the ending of ... "The Producers."

Oh, yes, and the two films were released by United Artists. And perhaps not coincidentally, Elliott Kastner was a producer on both films.
Posted by joe baltake at 6:00 AM

Great column, Joe. That’s a nice bit of subterranean connection that you make here. It was a common strategy in 1930s-40s for the studios to film the same script twice with only cosmetic changes.

Your "article" on Rancho Deluxe (which I have never seen) and The Missouri Breaks (ditto) was fabulous. Great great, great analysis. Very intellectual. Frankly, it belongs in Film Comment or Sights & Sounds, or one of the few print periodicals which still exist that cover the entertainment industry.

I'm with Richard Hansen´s remarks on this. I never saw/heard of Rancho Deluxe. BUT rushed to see Missouri Breaks the day it opened. Why? I am a cast-driven movie fan, as a rule. I'll go to/turn on any movie if I am enamored with the cast. I would even have been turned off to Rancho Deluxe by the poster much less be interested in something with Elizabeth Ashley. The poster Missouri Breaks was compelling - and Brando and Nicholson!