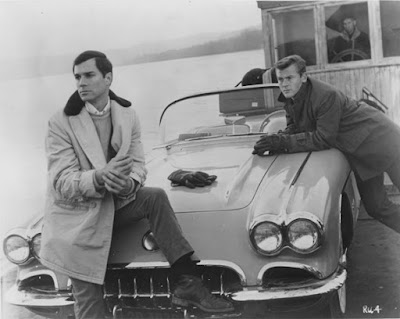 Martin Milner, who died yesterday (Sept. 6th) at age 83, was forever young and forever a character actor, never quite a leading man.

Milner seemed ageless throughout his long and diverse career, during which he played variations on the same basic character - the rock-solid, dependable best friend. Despite that, he was difficult to pinpoint.  With his blond, all-American good looks (replete with freckles), he could pass alternately for a laid-back, California surfer or a young Republican.

His acting career started in 1947 with a debut role in Michael Curtiz's "Life with Father" and ended 50 years later in 1997 with a guest role on the Dick Van Dyke series, "Diagnosis Murder."  In-between, he moved easily, back and forth, from movies to TV, from TV to movies, playing a lot of uncredited roles -  Alfred Hitchcock's "Dial M for Murder" and John  Ford's "The Long Gray Line," among them - during his first ten years in movies.

Milner was singled out in Variety's May 10th, 1955 review of Ford's "Mister Roberts," signed Brog.: "Ward Bond, as the CPO, is another who stands out in the fine cast, among whom are Phil Carey, Nick Adams, Ken Curtis, particularly good as Dolan; Harry Carey Jr., Perry Lopez, Robert Roark, as Insigna; Pat Wayne, and Martin Milner, the latter excellent as the mushmouthed shore patrol officer who confines the sailors to ship after an especially riotous liberty." 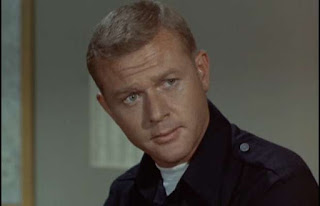 But, inarguably, Milner was best served on two TV series about male bonding - the cop procedural "Adam-12," opposite Kent McCord (who became Milner's BFF in real life), which ran on NBC from 1968 to 1975, and especially - most especially - the seminal "Route 66," opposite George Maharis (and, later, Glenn Corbett), on CBS from 1960 to '64.

The on-going tale of two guys, a sharp Corvette and a seemingly endless road across America, "Route 66" was a relative of sorts to Jack Kerouac's "On the Road" and like that literary sensation, it had an irresistible beat. It was special. And there really hasn't been anything like it on TV since.

If the prolific Martin Milner did nothing else, he would be celebrated for his moody performance as the wealthy, restless Tod of this iconic series.
Posted by joe baltake at 3:24 PM

Thank you for this. Since I retired in May of 2014, I've had more time to see old movies and TV shows on the amazing number of channels available nowadays. One channel shows "Adam-12," which I started watching for the pleasure of seeing long-vanished parts of Los Angeles during the on-location shoots, but which I've continued watching because - to my surprise - it's a solid show. I suspect it does a better job than many more celebrated series of showing the blend of mundane and bizarre that makes up a patrol cop's daily life. The foundation of the show, though, is the relationship between the two cops played by Milner and McCord, and - no disrespect intended to the latter - it's Milner who does most of the memorable work. You managed to get at why he had such a long career, and why we can still enjoy his work today.

iconic! Loved the piece but please retire that word