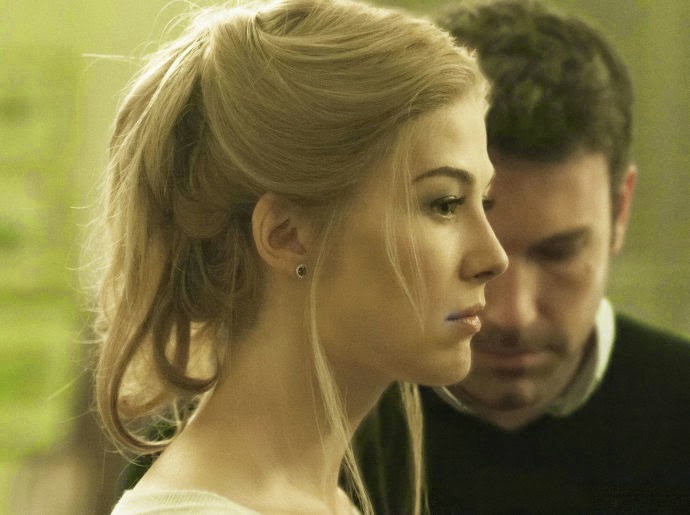 Crime films that detail how a murder or robbery is planned are nothing new, and in the past few years, David Fincher has come up with two of the best - "Zodiac" (2007) and "The Girl with the Dragon Tattoo" (2011), both of which brought exacting detail, and intelligence, to the formula.

But few modern police procedurals have veered away from the norm as daringly as Fincher's film version of Gillian Flynn's on-going best-seller, "Gone Girl," in which victim and victimizer continually swtich places until their personalities seem to meld together into a kind of rorschach-like blur.

One could say, and without exaggeration, that "Gone Girl" is the "Persona" of policiers.  To make matters even more Bergmanesque, there is a hint of "Scenes from a Marriage" in Fincher's depiction of the lengths to which both Amy and Nick Dunne (Rosamund Pike and Ben Affleck) will go to deal with a marital arrangement that has become more rancid than stale.

And it is, indeed, every bit of an arrangement.

The layered,psychology-tinged performances of Affleck and Pike make it difficult not only to empathize with either, but also to fully dislike them.  Pike's Amy had disappeared even before she physically departed from their home, and Affleck's Nick was never really there to begin with.  The so-called "crime" that drives the film is much less commanding than the narcissistic motivations of a couple trying to,well, consciously uncouple.

Brilliant take on this movie. Different. You made me think about it in a different way.

Loved this movie. Finger brings moments of beautiful delirium to it. Brilliant, indeed, as James K. says. But that word also extends to the movie itself.

This is a very fine review of GONE GIRL. I can’t find anything to disagree with. A critical study is waiting to be written about Fincher's brand of auteurism, which I find very specific in all his films since "PanicRoom"

Magnificent film. Fincher should be terribly proud of it. I see why you associate it with Bergman. I can imagine this being based on a foreign film - much like "Girl with a Dragon Tattoo" - rather than an American best-seller.

I wouldn't say that Bergman’s influences is all over the place in "Gone Girl," but I will say that if Ingmar Bergman had every made a marital crime drama, it would have looked like this movie.