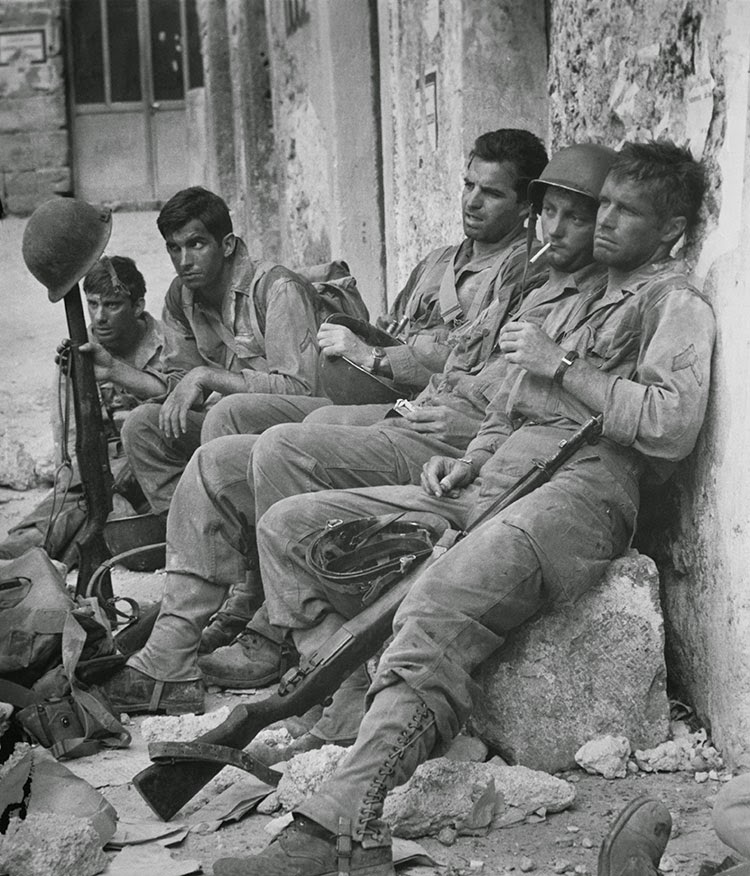 Note: Carl Foreman's anti-war epic from 1963, "The Victors," a lost film, was originally profiled here as a cinema obscura entry on December 6, 2007, in conjunction with a rare screening of the full-length roadshow version on The Military Channel, scheduled for January 19 of the following year. Since then, the film has surfaced in its full version, courtesy of The Film Society of Lincoln Center, on March 1, 2010 and is scheduled for a showing at 3 p.m. on tomorrow (Saturday, August 16) at The Billy Wilder Theater of the UCLA Film & Television Archive.  Is it just possible that, at long last, a DVD release will follow? (Apparently, a DVD has already been released in the UK.) Let's hope so. Below is the original cinema obscura essay and the initial comments posted at that time.


The sole directorial effort of Carl Foreman, the prolific writer and producer, "The Victors" remains one of the most powerful of anti-war films.

It was one of Columbia's major productions of 1963 - a three-hour (plus intermission) roadshow production for which the studio harbored Oscar fantasies. The studio's other big Oscar bid that year was Otto Preminger's equally sprawling "The Cardinal." But while "The Cardinal" has surfaced on VHS, Laser and DVD, "The Victors" continues to sit on some shelf at Sony.

Shot in widescreen and black-&-white by Christopher Challis and boasting a huge international cast, "The Victors" works essentially as a series of short stories about the various members of an infantry squad as it treks from Sicily to Germany during the final weeks of World War II, crosscutting their interpersonal relationships with those they share with the enemy and with assorted women. Foreman, who wrote his own script, keeps his film big and hulking, while also managing to concentrate on the human interest in his vignettes. 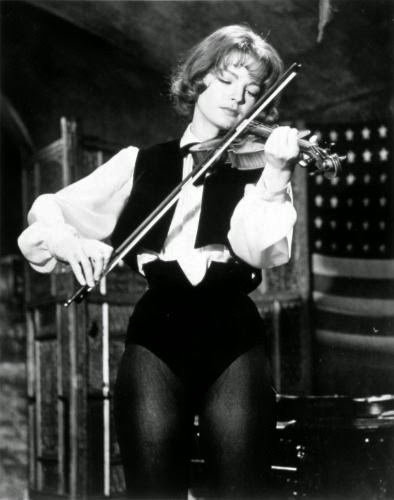 Peter Fonda, for example, pops up as a soldier obsessed with saving a puppy from the ravages of war; Eli Wallach plays a harsh sergeant who has his face blown off in combat;  George Hamilton is a G.I. disillusioned when the woman he falls for becomes a prostitute; and, in the finale, Albert Finney appears as a drunken Russian soldier whose face-to-face encounter with the disgusted Hamilton neatly sums up the insanity of war. (A bit of trivia: Romy Schneider, pictured left, played Hamilton's love interest and, although her name remained in the credits, her role was completely deleted from the film when CBS aired the movie for the first time in the late '60s.)

The best moment in the film, for my money, is the stark sequence when a young American deserter is executed in the snow while Frank Sinatra's "Have Yourself a Merry Little Christmas" plays in the background.

There's more, but I haven't been able to see the film in years and it is quickly disappearing from my mind.

As a writer, Foreman worked largely with producer-director Stanley Kramer, penning both including "Home of the Brave" (1949) and "The Men" (1950). His last film in tandem with Kramer would be the Fred Zinnemann-directed "High Noon" (1952), whose release coincided with Foreman's "hostile" testimony before the House UnAmerican Activities Committee. His refusal to cooperate ultimately led to his blacklisting.

Foreman would continue to write movies, using assorted pseudonyms (including Derek Frye) and often without taking credit at all. It was pretty much known that he wrote the screenplay for David Lean's 1957 Oscar-winning "The Bridge on the River Kwai," although credit would go to Pierre Boule, the French author who wrote the novel upon which "Kawi" was based. Boule subsequently took home the Oscar for Best Screenplay, although the Academy would honor Foreman for his contribution in 1985, following his death from brain cancer the year before.

As a producer, Forman was responsible for such fine films as "Born Free," "Young Winston" and, best of all, John Dexter's 1970 "The Virgin Soldiers," another vivid (and lost) anti-war film starring Hywell Bennett (and whatever happened to him?), Lynn Redgrave and Nigel Davenport.

But, for me,"The Victors" remains his towering achievement.

A bit of web surfing for info about "The Victors" brought out the piece you wrote on it. I consider myself tremendously fortunate to have seen it on Times Square in New York, uncut, just days after it opened. Unfortunately, this has also been a curse. Just weeks later, I excitedly dragged a friend out to see it and saw the devastation that had been perpetrated on the original version by studio hacks, apparently over-reacting to the mixed reviews that greeted its premiere. What a horror! The radically shortened edition is a decent film but wonderful sequences are gone and so much of its special atmospheric richness, the very thing that REALLY set it apart, was torn out of it.
Ever since then, I have been trying to discover if the excised footage went the way of the deleted scenes from Peckinpah's "Major Dundee". These were scrapped and thought to be lost forever. Do you imagine that anyone knows the truth about this? Might a decent copy of the original version still exist? Have you read the numerous statements that Pentagon brass so despised the film that they did everything possible to help bury it? Where can one turn for reliable answers to such questions? The internet seems so vast, yet so devoid of good leads regarding "The Victors".

I vividly recall this movie, walking out of it when I was an impressionable 15 year old into the bright sunlight, I was stunned. This remains for me the most powerful evocation of the horrors of war. I too think the execution sequence was the most powerful. It is based on an actual controversial act of desertion by a mentally retarded soldier. The Romy Schneider storyline is also moving, of course the sergeant with his face blown off. Great movie.

I understand the frustrations you feel completely. It's annoying not to be able to find information that should otherwise be easily accessed. Anyway, I'll ask around and if I find a site that might answer your questions, I'll post it here. Keep your fingers crossed.

I saw this film on TV when I was about 8yrs and it’s stayed with me ever since.
I would love to see the un-cut version mentioned in the comment above. One of the best anti-war movies ever made.

This has been shown on the Military Channel. I assume it was cut for broadcast.

Hope it airs again and refreshes your memory...

I agree - what a shame that this film has not been shown in it's original condition and length for decades! I always thought that the uncut version is probably "out there" somewhere, as Mulder might say. But when no one came foward with a copy, I started to wonder if Columbia Pictures even knows if an uncut version still exists. Good to know that it does.

Students-this is for you. Art comes from how you feel, here the writer shows the passionate rejection of War as the through line of his screenplay to create
great living art. I remember the news items -their power grows - the sexy mysterious european women
made Belfast girls like me feel like wooden pegs - the fear of men
with knives and guns, militarised or civilian remains. I bow to
Carl Forman's genius, hopeful that yesterday's showing on BBC2 will
achieve it's wider recognition.

It was shown yesterday in the UK on BBC2 this afternoon. I watched it with my son and was gripped from start to finish.It was the full length version and the scene with the execution of the deserter was staggering, also the savage beating of the two black GIs sticks in my mind. Thanks for the background info.

too saw it yesterday on BBC2, I knew nothing about this film before hand and I was deeply affected by it. I thought it contrasted with the Band of Brothers, but the latter never managed to address the dehumanizing nature of war.

That American soldier executed by firing squad was Pvt. Eddie Slovik, and it's ironic that Sinatra's voice accompanies the scene since Sinatra planned to produce "The Execution of Private Slovik" based on William Bradford Huie's book in 1960 from a screenplay by the still black-listed Albert Maltz. In the face of industry pressure Sinatra backed down. Lamont Johnston directed a TV movie adaptation in 1974 with Martin Sheen as Slovik.

Also, I think Michael Wilson had a hand in the "Kwai" screenplay along with Foreman.

I watched about two thirds of it yesterday on BBC2. What I saw of it was amazing. I think the story where the young violinist becomes corrupted by the sleazy GI was the most powerful. I hope it's repeated soon or released on DVD at some point.

attmay said...
This comment has been removed by the author.
2:54 PM

I wish TCM would show this, please.