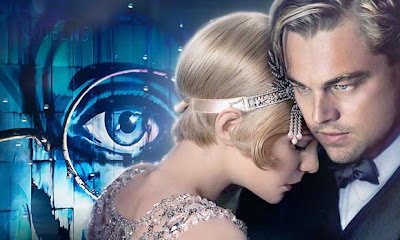 Well put! I especially like your assessment of Luhrman as a one-trick wonder.

beyond bedazzling....i wanted more. It seemed a contemporary version of the 1920s, it lacked the soul of those times. When you add rap/club music to a flapper party, it could be NYE or a halloween party, 21st century. What about keeping it a Jazz movie, songs from the times? Too frothy, too music video, too much. The acting was good overall. I failed to see what was so captivating about Daisy, except she cries too muchand pulls a depreciating moue now and then. Myrtle who had more depth in the book, was reduced to being a gas station hooker. It was a good movie, just lacked on the excecution.
One thing I did like was how they incorporated how Gatsbys story came to be, typewritten letters on the screen and the finished novel in the end.

Absolutely awful. I had hoped for a more lively update to Redford/Farrow but got "Twinkies On Parade"... Full of f=delicious creme fillings but no solidity to the containers. I can usually ignore the plot, acting and direction where Ms. Mulligan is concerned, but she was so completely bland in her affect and deliveries that I began to wonder if there was only a false front on screen and what then did with the rest of her persona while she wasn't projecting it.

The only possible redemption could have been the delivery of the story itself, but after an hour and that incredibly silly reunion scene between Gatsby and Daisy, I just gave up expecting anything to actually be of value and just enjoyed the (2-D) visuals. For the stereoscopically enabled, perhaps this might have been prettier to watch, but it was sufficiently well-photographed to make it sit-through-able, albeit with a lot of fidjiting.

Also, whoever thought that adding rap to a Jazz Age setting was a good idea needs a psychiatrist.

Joe, if I remember correctly, you gave "Romeo + Juliet", "Strictly Ballroom", and "Moulin Rouge" all four stars. You also gave "Australia" three stars. So how then does Baz Luhrman earn the description of a "one-trick pony"? It seems to me that you actually enjoyed most of his films.

Jeff! I can't actually recall the number of stars that I gave "Australia," but I do remember clearly that I didn't like it. So I doubt that I gave it three stars. I know for a fact that I wasn't so generous with "Romeo + Juliet" and "Strictly Ballroom," but I did go crazy over "Moulin Rouge" - the first time I saw it. A subsequent viewing made me question my taste. The film is genuinely annoying, as is "Gatsby."

Thanks for the reply, Joe. I loved your reviews when you were a critic for the Sacramento Bee. I would read them before every movie I saw. Usually my memory is strangely accurate when recalling film star ratings, and I do recall you disliking certain details about these movies, but I could have sworn you gave them these ratings. Oh well, maybe my memory is failing. By the way, what did you think of the new Mad Max movie? Hope you're enjoying your retirement!

Jeff- Thanks for the kind words. (I miss Northern California!) Re memory, I'm willing to bet that mine is in worse shape that yours (Old Age, oy.) So you might be right about the ratings your remember. Plus when I was at the Bee, I had the habit of changing the star ratings as my attitude towards certain films changed. So, a four-star movie might go down to three stars in a capsule review a week or two later, when I was free from any deadline restricts and could put the film in better perspective. Or a one-star films could become three stars in the capsules. The Powers at the Bee indulged me and didn't mind one bit. But the readers/moviegoers were understandably confused, even though I would explain each change in each capsule. So, you might be right. And to answer your "Mad Max" question, I still have yet to see it. Maybe On Demand one day. I've become very selective in my retirement about what I see. As for retirement itself, I surprised myself and don't miss my byline at all - although this site (which my wife designed for me) serves as a nice transition. And there's a plus: No editors! Thanks, again, Jeff.