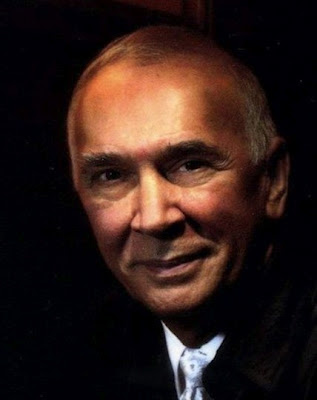 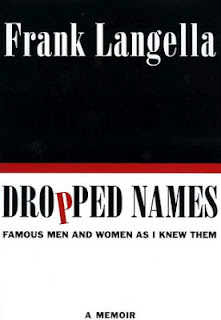 "Dropped Names: Famous Men and Women as I Knew Them" (HarperCollins/$25.99/356 pages), Frank Langella's compulsively readable debut as a writer, is the ideal beach book.

Langella, who is every bit as inventive a writer as he is an actor, calls this tome "a memoir," but that's a stretch. It's a series of encounters that Langella had with a number of notables - 66 in all - and all of them, except for one (Rachel "Bunny" Mellon), are deceased. Langella wittily presents them, his "Cast of Characters" (his words), "In Order of Disappearance."

That's why Whoopie Goldberg, Langella's longtime companion, is not included.

Only dead folk here. And I have a theory on that: The dead can't challenge what's written about them. Consequently, I doubted much of what I read here. I'm not questioning Langella's veracity, I'm not calling him a fabulist, but rather, I'm exhibiting my own dark, cynical skepticism.

Case in point: His reminiscence of his fleeting encounter with Marilyn Monroe, the first celeb in the book, seems like a fantasy. It was the winter of 1953 and the young Langella was "aimlessly looking for something in New York - unaware of what I was looking for." Then he encounters "a long black Limousine from which a white-gloved had appeared." It's ... Marilyn Monroe.

"She turned briefly to her right, saw me standing there, smiled like a sunbeam, and said in a soft whisper: 'Hi.'

"An indefinable yearning to free myself from a life I instinctively felt was killing my soul had caused me to venture forth that day without guidance or direction ... Marilyn Monroe had, I'm certain, awakened that morning yearning for something she too could not define; a tortured soul that I saw only as a beautiful woman and a Movie Star."

I love it, but I don't believe it for a second.

To Langella's credit, he confesses his own flights of fantasy up front. Of his remembrances, he writes: "I admit they are most likely prejudiced, somewhat revisionist, and a tad exaggerated here and there. But were I offered an exact replay of event as they unfolded, I would reject it. I prefer my memories."

Of a fractious backstage situation between Hume Cronyn and Jessica Tandy, which isn't pretty, Langella describes it as "an incident not recalled by either."

But who cares? This stuff is fun to read, preferrably with a gin-&-tonic in hand. His take on Anne Bancroft is particularly delicious: "Potentially one of the greatest actresses of her generation, she was consumed by a galloping narcissism that often undermined her talents."

He writes of an incident at Bloomingdale's perfume counter where Bancroft "saw a woman across the way smiling at her. She smiled back. The other woman returned hers with an even broader smile. And Annie said she felt inextricably drawn to this woman, wanting to go around the counter to embrace and kiss her passionately, until she realized she was looking into a mirror."

What's really interesting is Langella's description of Coral Browne's relationship with columnist Radie Harris who apparently was obsessed with Browne. Harris, Langella writes, "had a bum leg, walked with a cane and wore a brace."

And doesn't that description exactly fit the columnist character that Browne played in Robert Aldrich's "The Legend of Lylah Clare"?

Note in Passing: Curiously, Langella makes little mention of "Diary of a Mad Housewife," the film that put him on the map, or its director Frank Perry, and nothing of his beguiling co-star in the film, Carrie Snodgress.

I read the book and had the same impression as you. I will say one thing for Langella, however: He has no qualms about painting himself as the bad guy in many situations. Good read.

I read Langella book. It was like a forbidden box of chocolates. But at the end I felt he kissed and told too much. He was so cruel to Deborah Kerr, for instance. And Liz Taylor. I met him once at at a NYC restaurant. I asked the waiter if I could approach him and he told me Langella loves adulation. He was most gracious.

Dead people also can't sue. Sounds like a fun read, though. The "devoured by a galloping narcissism" has more truth to it than I wish it did, for example. (It also made me think one should never eat and run.)

Very nice post. I just stumbled upon your blog and wanted to say that I've really enjoyed surfing around your blog posts.