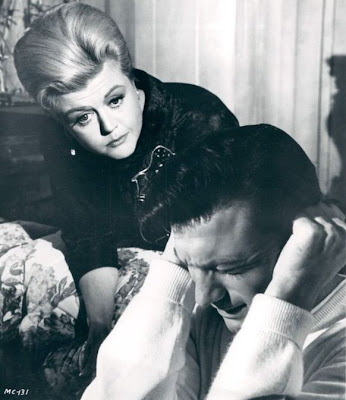 "I am United States Senator John Yerkes Iselin, and I have here a list of two hundred seven persons who are known by the Secretary of Defense as being members of the Communist Party!"

-James Gregory, as a clueless but ambitious politician addressing the Senate in "The Manchurian Candidate" (1962), a film, written by George Axelrod and directed by John Frankenheimer, that has proven to be quite prescient.

Jump to a dialogue between Gregory and Angela Lansbury as his machiavellian wife:

Lansbury: "I'm sorry, hon'. Would it really make it easier for you if we settled on just one number?"

Gregory: "Yeah. Just one, real, simple number that'd be easy for me to remember."

Gregory: "There are exactly 57 card-carrying members of the Communist Party in the Department of Defense at this time!"

Excuse me, but does any of this sound vaguely familiar?

I've been waiting for months for someone, anyone, to link the recent deranged rants of Rep. Allen West (R-FL) - "I believe there’s [sic] about 78 to 81 members of the Democrat Party that are members of the Communist Party ... No, they actually don’t hide it. It’s called the Congressional Progressive Caucus” - to James Gregory's tirade in "The Manchurian Candidate" 50 years ago.

But then former GOP presidential candidate Michelle Bachmann came along, alledging that Huma Abedin, longtime aide to Secretary of State Hillary Rodham Clinton, may have ties to - gasp! - the Muslim Brotherhood. Oy!

Since no one else has picked up on the connection or made the comparison or offered an opinion, I'll do - and add the unsolicited comment that the professional Republicans, seemingly more desperate than ever, have lost it.

yes, this decade and the political polarization is very much like the 1950's. Great observation, Joe!

The Manchurian Candidate quote is a direct--and to its original audience, unmistakable--allusion to Wisconsin Senator Joe McCarthy, who on several occasions offered an exact figure of "Communists" employed by the U.S. Department of State. (I really hope you knew this and just forgot to mention it.)

I'm still not certain if the delusional Allen West was paying some kind of homage to McCarthy, or if the historical parallel was inadvertent. In either case, it is neither a tribute to Mr. West's intelligence nor a film citation.

Completely agree-- can't think of any of these clowns (Bachmann included) without thinking of that fantastic film.

Jonah! Well-put and, yes, I was aware of the dubious source of the quote. Thanks for sharing! Same to you Ed. -J

I love that Gregory and Lansbury got the number 57 from a Heinz 57 bottle that was sitting on the table in front of them. That's a pure George Axelrod touch, I'd bet.