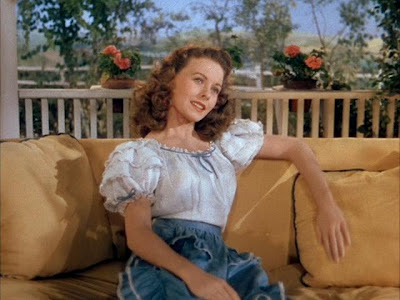 When Walter Lang filmed Rodgers and Hammerstein's original movie musical, "State Fair," in 1945, he came up with the clever idea for the first reprise of "It Might As Well Be Spring."

Jeanne Crain (singing voice dubbed by Louanne Hogan), as the film's young heroine Margy Frake, is in a deep funk and, sitting on a porch swing looking forlorn, is momentarily revived when she hears/imagines the voices of Ronald Coleman, Charles Boyer and Bing Crosby whispering sweet nothings to her. Cute, although it's never been clarified if the voices are those of the real actors or impersonators.

Anyway, flashforward to 1962 and the remake of "State Fair" - or perhaps 1961, when the film was actually made. José Ferrer is directing the remake and Pamela Tiffin (singing voice dubbed by Anita Gordon) is now playing Margy.

While the film was still in production, there were reports that Jimmy Stewart, Cary Grant and Frank Sinatra would be making cameo appearances. The assumption, for anyone familiar with the material, was that they would be involved with Tiffin in the reprise of "It Might As Well Be Spring."

Well, the film opens in 1962 and there is no reprise of "It Might As Well Be Spring." Hence, there's no Frank, Cary and Jimmy. What happened?

Was the reported sequence ever actually filmed?

The only clue to its possible existence is a shot of Tiffin in the end credits in a scene that is not in the finished film. In it, she is laying on her bed looking kinda swoony. My hunch is that it is in preamble to the reprise with Cary, Jimmy and Frank.

And by extension, my hunch is also that the scene was indeed filmed and, for some bizarre reason, was dropped.

Given that Ferrer is long gone, only Pamela Tiffin can provide insight into the mystery.

I suppose it's possible that the number was shot with the idea that the 'special guest voices' would be dubbed in later, but then one or all of their deals fell through.