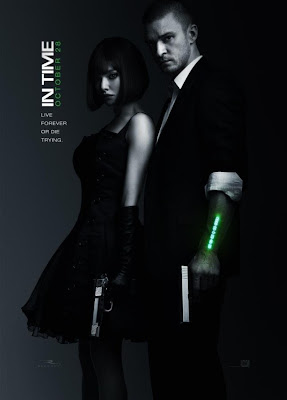 For some bizarre reason, Andrew Niccol's prescient "In Time" came in under the radar, despite its urgent timeliness and first-rate storytelling.

The film is a scifi allegory for the current economic woes, only it isn't money problems that nag the country's population. It's time - which is running out. Money is nothing here. Time is the new commodity, with people bartering, stealing and losing time as, well, time runs out. It's a clever premise and Niccol ("Gattaca" and "Simone") pulls it off with verve and with a very slight bow to Hitchcock. I sense that the filmmaker used Hitch's "North by Northwest" as a template for the chase that ensues.

Justin Timberlake is terrifically twitchy and anguished as a guy living on borrowed time who takes up with a woman who fairly drips in timely wealth - played by Amanda Seyfried with her trademark anime eyes and a Louise Brooks bob. Cillian Murphy is the "timekeeper" on their trail as they steal time, Bonnie & Clyde-style, and give it away, and Olivia Wilde has an amusing, yet poignant bit, as Timberlake's eternally young mother, who stopped aging at 25 and knows her time is up soon.

"In Time" deals with timeless movie conventions with a smart modernity.

Note in Passing: Kudos to The San Francisco Chronicle’s Mick LaSalle, The New York Times’ Manohla Dargis and The New Yorker’s Bruce Diones for seeing the value in this otherwise critically undervalued film.
Posted by joe baltake at 8:45 AM

I agree. I thought this film arrived cold and quietly departed. Glad I got to see it. It deserved better. I can't fathom why the critics shrugged.

I wish I shared your admiration.

Some people come to movies out of a sincere desire to like them. Some don't. One has to be very cautious about what critic(s) one reads.

The subject of inexplicable critical infuriation!

well now I want to see it! You made it sound fascinating,unlike other articles and web postings.

Opening to mostly lackluster reviews, I wasn't sure what to expect--but I was surprised at how much this movie grew on me as it went along. I'd give it a "B."

I must say, the movie deserves a cult. Whether you agree if it the movie itself displayed a believe able story, it is apparently clear how absolutely compelling the plot is. The very concept is killer, but I do agree the writer could have executed it better. I give it an easy 9.3 out of 10 for a spectacular movie that I have enjoyed watching several times.