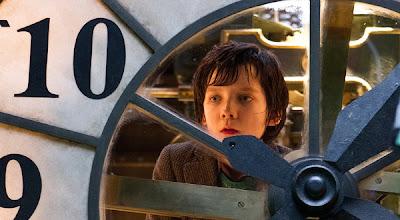 At once exhilarating and graceful, Martin Scorsese's masterful "Hugo" takes one by surprise - and aback - despite its maker's credentials.

The skill on display in this so-called "family film" is underlined by the audacious camerawork of Scorsese's new house cinematographer, the great Robert Richardson who, starting with the film's initial sequence, pulls us in, embracing us and whirling us along. It's a dizzying, delerious journey (which helps the modern 3-D process realize its potential), seen from a child's point of view but not necessarily a journey for children.

"Hugo" may have a young protagonist, embodied by the excellent Asa Butterfield as a kid who lives within the innards of the complicated clockworks of a Parisian train station, but its soul is old.

No, this is not a "family film" (unless it's a family of particularly sophisticated children). Scorsese uses little Hugo, the hero of Brian Selznick's source book, “The Invention of Hugo Cabret,” as an excuse to conjur up a lovelorn, movie-fed daydream about the humble beginnings of film via the revolutionary vision of Georges Méliès (played here with an aching sadness by Ben Kingsley).

A film that does not condescend or compromise, "Hugo" remains faithful to its own vision - one that's quiet but intense. Blessed with a remarkable ingénue performance by the preternaturally gifted Chloë Grace Moretz and an atypically dimensional one by Sacha Baron Cohen, "Hugo" looms as a touchstone of films in the new millenium.

Note in Passing: Scorsese quotes other films and filmmakers here, but unobrustively. I was particularly taken by the scenes in which young Hugo views the conversations shared by the characters played by Frances de la Tour and Richard Griffiths from a distance - in his clocktower. Like James Stewart spying on his neighbors in Hitchcock's "Rear Window," Hugo hears only heavily gestured mumbles, muttering and half-sentences.
Posted by joe baltake at 11:39 AM

I have to admit that while I’m always ready for a surprise, HUGO still took me by surprise and i look forward to re-viewing. I like most of Scorsese's work, especially elements and moments in GOODFELLAS. I surpised myself by finding HUGO kind of touching.

I'm looking forward to seeing this. This post makes a nice companion to your next one on "Garbo Talks": two rough-andtumble New Yorkers making atypically sweet movies. Similarly, Scorcese's movie sounds as if it might make a good double-bill with Woody Allen's "Midnight in Paris." (By the way, speaking of Carrie Rickey, do you know if her Flickgrrl blog will continue, now that she'll no longer be a regular reviewer with the Inquirer?)

Jane said...I took my 11 year old granddaughter who replied, when I asked her if she could explain the plot to her parents when she got home "it is very difficult to explain a really good movie". I agreed that it was a REALLY GOOD film.

Why is there no mention of Johnny Depps part in this movie? I saw his name in the credits as a producer, I believe. Also seen him in the band segments! Did he choose to remain anonymous?

Was Johnny Depp in this movie as a band member? His name was in the credits as a producer I think?

Jane! I agree that band member certainly looks like Depp, and then when I saw his name in the credits as one of the producers, I was sure it was him. But IMDb does not list him in the cast - not even in an uncredited role. Still, I believe it was him.

If a movie can claim fame to being the biggest "buyoff" of reviewers- it's Hugo! Hugo has been so overrated by "Bandwagon" reviewers!

I found Hugo extremely slow moving & boring. I doubt many families would be able to sit through this movie. At a cost of $180,000,000, the cinematography is elaborate sets & computer graphics.

Not one reviewer makes a single comment that the characters live in Paris-but none speak with a French accent. They all speak "British English". How unrealistic! Touted as a family film, no reviewer chastises the main character for being a thief. He blatantly steals throughout the movie. I thought stealing was a crime. There is a message for young people! In a Scorsese movie, theft is acceptable.

Jude Law had a "blink" & you missed it part. Asa Butterfield had little expression & a flat "British accent" performance. Scorsese should have found a more passionate kid. There are dozens of U.S. citizen kid actors with far more energy and passion who would have done a better job. You feel no kinship with these characters. Ms. Moretz didn't speak French or have a French accent either. Very Disappointing performances in a story that called for much more passion and emotion. Sasha Baron Cohen tried to copy Inspector Clouseau. At least Peter Sellers spoke with a French accent.

Hugo is too long and drags. It ends on some Scorsesesque Hollywood "Cinema" cliche'. I would suggest you "Pass" and wait for a DVD. I borrow a phrase from Tom Hanks in the movie "Big"....I don't get it!

Jennifer A. chastises reviewers for giving Hugo a pass for stealing, and implies that the movie sets a bad example for children. I think she badly underrates the ability of children to understand the need for theft when the alternative is starvation. This is underscored (for literate adults) by references to Jean Valjean throughout the movie, another poor man pursued by the police after theft to avoid starvation. I loved this movie, and so did my husband and two daughters, ages 10 and days-away-from-12.

An over-rated long and boring movie that is given accolades just because Martin Scorsese directed it. With a huge $180,000,000 budget, my grandmother could have made a descent movie.

There was no depth in any of the main characters performances. The fact that not one character spoke with a French accent made the movie unappealing and false. If you can say that a movie about French characters portrayed by actors who can't speak with a French accent is good acting, then you need a labotomy. There is no credibility or connectedness with the book in this regard.

Scorsese has made a number of good interesting and well acted movies. This is not one of them and to hide the flaws by calling it "Cinema Verte" is simply a joke. Ben Kingsley's character was a French Film Maker and he doesn't speak in a French accent, but instead a "heavy" British accent? And what about Sacha Cohen, nothing there either. Sorry, not good acting. And the 2 kids in the movie Asa Butterfield and Chloe Moretz couldn't speak with French accents? With their monumental budget, you think Scorsese could afford to hire a few dialect coaches to teach the actors some French? It's obvious they could not do the accents. So where's the great acting the reviewers talk about. Even Peter Sellers in the Pink Panther made the effort to speak in a French Accent. Chloe Moretz is American. Why is she speaking with a British accent in the movie?

I would not believe these fantasy biased reviewers comments about this movie. It is way too long and way too boring in the guise of others calling it an "artsey" film. Pass on this unentertaining and mixed up story...

To Brian: OK, so they don't speak with french accents - boo hoo. He probably picked out actors that didn't just to piss you off. And if you think you can make a better movie with $180 million, get off your high horse; I will applause you if I see your name in the credits in the next half a century. Make thoughtful critiques of the movie please, and not some rant like I am. I haven't seen the movie YET but I'm posting this because I was just disgusted by your sense of entitlement, and lack of a fair review because they didn't speak with a french accent. I guess in the same sense "suspension of disbelief" doesn't apply to you "critics" either.