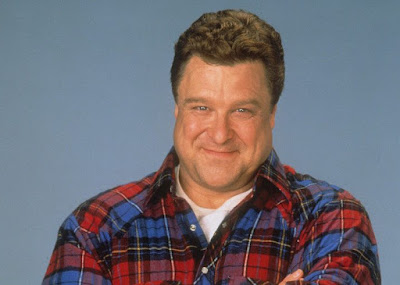 Although he had early screen roles in "Sweet Dreams" and "Revenge of the Nerds," I first took note of the remarkable character actor John Goodman in David Byrne's still-fabulous 1986 new-style film musical, ”True Stories,” a movie that Goodman made after having scored big on Broadway the year before as Pap Finn in "Big River," Roger Miller's musical version of Mark Twain's "Adventures of Huckleberry Finn."

Among them were "Raising Arizona," "The Big Easy," Punchline," "Burglar" and "Everybody's All-American," quintessential, laid-back '80s films that make one deeply appreciate - and, yes, seriously miss - the 1980s.

Hollywood seems incapable these days to produce straightforward, no-frill films of this variety. 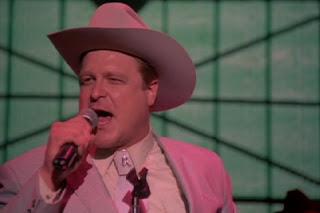 Anyway, the rest of America discovered Goodman in 1988 as Dan Conner on the excellent sitcom, "Roseanne." The show's creator, Roseanne Barr, may have trained as a stand-up comic but she was no slouch as an actress.  Still, she was savvy enough to surround herself with talent from Broadway (Goodman, Laurie Metcalf, Estelle Parsons and John Randolph), venerable movie people (Shelley Winters, Ned Beatty and even Tony Curtis), an up-and-coming hunk who could actually act (George Clooney), smart, cutting-edge comics (Martin Mull and Sandra Bernhardt) and terrific kid actors (Lecy Goranson, Sara Gilbert, Michael Fishman, Johnny Galecki and Stephen Dorff).

But, for me, Goodman's smooth, naturalistic performance as an average husband and dad was the titanic supporting structure of "Roseanne."

Now something of a household name, thanks to "Roseanne," Goodman continued to moonlight in supporting movie roles, but in the early '90s, something happened: Goodman started to score lead roles, beginning with Frank Marshall's "Arachnophobia" (1990). His name was suddenly above the title - for a while, at least. 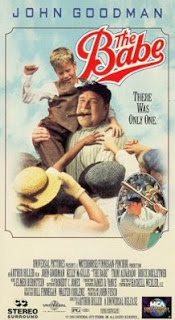 I was reminded of this when I spotted a cable showing of "The Babe" in a TV listing. Goodman plays Babe Ruth in the 1992 Arthur Hiller film and it is inarguably his biggest screen role.

Around this time, Goodman had another lead role in Joe Dante's ”Matinee,” as well as starring parts in David S. Ward's "King Ralph" (opposite Peter O'Toole, no less), Brian Levant's "The Flintstones" and the Melanie Griffith-Don Johnson remake of "Born Yesterday" (in which Goodman replaced Nick Nolte in the Broderick Crawford role), directed by Luis Mandoki. He was also Bette Midler's leading man in "Stella," the now-forgotten re-do of "Stella Dallas."

And I can't ignore his star vocal turn as the furry James P. Sullivan, the imaginary friend of little Boo, in the heartwarming "Monsters, Inc." animation. Much like Dan Conner, Sullivan underlines Goodman's appeal as an actor - someone who inhabits a role so fully that he brings a cozy, lived-in feel to his line-readings, facial expressions and his movements which often seem almost choreographed.

For a big man, Goodman is incredibly light on his feet. 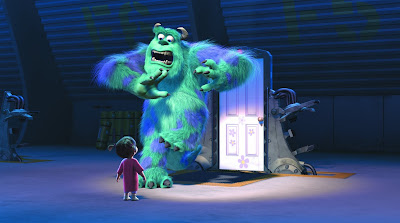 As dazzling as Goodman has been in his few starring roles, he's more in his element in smaller turns, particularly those for the Coen Brothers - the aforementioned "Raising Arizona," "The Hudsucker Proxy," "Barton Fink," "The Big Lebowski" and "O Brother, Where art Thou?" Exceptional. 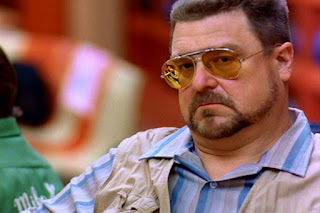 But, currently, he seems comfortably ensconced back in supporting roles again.

More recently, Goodman has demonstrated just how invaluable he is in these roles in  such titles as "The Artist," "The Monuments Men" (working for and with his "Roseanne" co-star, George Clooney), "Trumbo," the Coens' "Inside Llewyn Davis" and "Argo," for which he deserved an Oscar nomination every bit as much as his co-star Alan Arkin. What? A mere piddling Oscar nomination? Heck, give this man his own golden statuette already.

Note in Passing: When I was reviewing out of Sacramento, filmmaker David Zucker made a stop in 1988 to promote the film "Naked Gun: From the Files of Police Squad." He said that he was hoping to find material that would suit John Candy and I suggested a remake of the 1968 Philippe Noiret French charmer, ”Alexander” (aka "A Very Happy Alexander" / "Alexandre le bienheureux"), directed by Yves Robert. But I hastened to add that it would be a better fit for Goodman. Anyway, Zucker had never seen it. I had an old Beta copy and he still had a Beta player. So, Zucker borrowed my tape, later returning it by mail and confessing that he was unable to find financing for it with either Candy or Goodman in the role.

~photography: Disney/Pixar 2001 ©
still shot of Goodman in "The Big Lebowski"

This is long overdue. John Goodman is a remarkable actor. I especially like this TV-movie work. I'm thinking of his acting in tht Huey Long movie and the TV version of "A Streetcar Named Desire" with Alec Baldwin and Jessica Lange. He's a national treasure.

I can't help but notice that you failed to make mention of Goodman's standout performance as Sally Fields' harried husband in "Punchline" which came out just before "Roseanne" hit the airwaves.

I'd add his terrific work on "The West Wing" as fill-in President when Martin Sheen's Jed Bartlet steps aside during a family crisis. He created a skilled Southern pol who used his public cornpone persona to disguise a very sharp, and surprisingly decent, mind and character.

He had a mesmerising and terrifying turn in the excellent Kevin Bacon thriller Death Sentence,

Yes, Joe, Goodman is a remarkable actor, especially on "Roseanne" where he has great chemistry with all the women in the cast - not just Roseanne and Metcalf but also the two girls and especially Estelle Parsons. I love that character and only Goodman could have played him.

I think I first became aware of Goodman in Taylor Hackford's underrated EVERYBODY'S ALL-AMERICAN. He's been a favorite ever since.

I've always admired Goodman's work... He plays a pretty good heavy, too... He was in a film with Denzel Washington - the name of which I am too lazy to look up right now - in which he played a police detective who gets touched with evil... The evil kind of jumps from person to person. The transformation he made was amazing, just with slight changes in his facial expression... Nice tribute, Joe...

Thanks, Michael. I believe the film is "Flight" - which I haven't seen! But it's the only title that Goodman and Washington made together. Must check it out. -J

Love him! Didn't realize how much he has done until I read your terrific post.

Joe- In addition to "Roseanne" and "The Monuments Men," Goodman and Clooney also worked together on the Coens' "O Brother, Where art Thou?

You're right, Sheila! How could I have missed that? -J

I had forgotten how MANY movies Goodman was in. And always credible.

Joe. I admire "Alexander," too. I always thought it would make a good basis for a sitcom. I think the idea behind it could be sustained for several seasons. And, yes, Goodman would be a good fit for it.

Yes, Jason, a TV series. For those unfamiliar with "Alexander," it has the sensuous contours of a classic French peasant comedy but is also a little radical in that it is a disarming celebration of laziness. The title character is a hulking farmer whose bossy, oppressive wife works him like a farm animal. When she dies (in a traffic accident), Alexander, newly liberated, goes to bed and stays there, sending his little dog to the local shop to pick up groceries (in a little basket) and to fetch the daily paper. Then, a new girl comes to town and she is just as slovenly as Alexander, a potential soulmate for him. I'm not sure that "Alexander" would be fully appreciated by Americans indoctrinated with the Work Ethic but it's delightful fun and definitely worth checking out.

Love this appreciation of John Goodman who is great in everything he does (even if the films aren't). One of my favorite small parts - the drug dealer in "Flight" who is brought in to sober up a stoned Denzel for his hearing about his plane crash.

I'm thrilled with this post and happy that Sarah and Glenn brought up Goodman's other TV work. Yes, "The West Wing"! And "A Streetcar Named Desire." I also like the stuff he does for HBO occasionally, especially the Al Pacino movie "You Don't Know Jack," about Jack Kevorkian.

The supernatural movie with Denzel and Goodman together is "Fallen". A demon (if I remember right) jumps from body to body and inhabits both actors at some point. It was directed by Gregory Hoblit. I don't recall you liking it, Joe--I think your rating was two stars. It was a rather half-baked, lukewarm thriller.

To Jeff Gonsalves- Many thanks for the heads-up. For the life of me, I can't recall "Fallen," which says something about either the film or me (old age!) Or perhaps I've successfully blocked if from my mind. However, I do have a vague recollection of it starring Washington.

And to Michael Fitzgerald- Apologies for suggesting that "Flight" was the film you had in mind. Apparently, Washington and Goodman made two films together. Perhaps more.