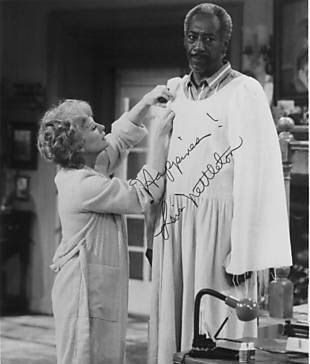 Lois Nettleton and Robert DoQui in an episode from Norman Lear's 1977 ensemble comedy, "All That Glitters" (a still signed by Nettleton)

For no good valid reason, other than I want to, I'm going to take a break from my usual obsession with forgotten films and briefly venture into the more rarified area of forgotten television. Actually, this is a subject that Stephen Bowie covers with some expertise on his remarkable site, The Classic TV History Blog: Dispatches From the Vast Wasteland.

Every once in a while, when I least expect it, my mind drifts towards lost '60s sitcoms from my distant youth:

Ezra Stone's "The Hathaways" (1961-62), in which the inimitable team of Peggy Cass and Jack Weston plays parents to a family of chimps; Gary Nelson's "Occasional Wife" (1966-67), in which Michael Callan makes like Jack Lemmon as a careerist who enlists Patricia Harty to pretend to be his wife to help him in his job, and David Swift's "Camp Runamuck" (1965-66), a minor classic about deranged camp counselors, among them comics Dave Ketchum and Dave Madden - and Nina Wayne as Caprice Yodelman. Isn't it remarkable the things that one remembers?

Then there's Norman Lear's short-lived attempt to tranpose Lanford Wilson's raunchy, eclectic play about lowlifes, "Hot L Baltimore" (1975), to the small screen, with a dream cast that included James (then Jamie) Cromwell, Conchata Ferrell (from the play) and Richard Mazur.

But the title that I miss the most is Lear's trailblazing 1977 series, "All That Glitters," an inventive gender-bender that, not surprisingly, lasted only one season. Lear may be better known for "All in the Family," "Maude" and the surreal soap, "Mary Hartman, Mary Hartman," but "All That Glitters" is arguably his best, despite its status as a nonentity these days. It ran for one season ... in a late-night slot ... in syndication.

The premise was simple. The sex roles were reversed, with women behaving like dominant alpha males, running companies and the world (and having casual affairs because they earned them and because, well, they can), and the men staying home and knowing their place. Playing on the edge, the show introduced Linda Gray (who, of course, would go on to do "Dallas") as a transsexual - a woman who was once a man.

The series' two house directors were Herbert Kenwith, a sitcom specialist of the era ("Good Times" and "Diff'rent Strokes"), and James Frawley, who had directed such eccentric titles as "The Christian Licorice Store," "Kid Blue," "The Big Bus" and "The Muppet Movie."

That's why it glittered.
Posted by joe baltake at 2:47 PM

I also loved "All That Glitters" and like most Lear shows, it pushed the envelope in a good way. I just think it was too esoteric for its time, that's all. I've a hunch that if it were shown today on one of the cable channels or if it came out on DVD, it has the stuff to become a cult hit.

I agree, Tina. Bring on the DVD already!

I also wish that they'd make this into a DVD. Have told my kids about this show and how the subtle gender bending was more eyeopening than the obvious. I keep looking for it to no avail.

I LOVED that show. Cancelled too soon!

I loved the show too, the cast was great and you had to be on your toes when you worked with those great women..WOW.. not least of all Mr Lear!!!It was great fun and awfually hard work we had to memorize 40 or more pages a night...No prompter,and we wouldnt get threw untill seven or eight then back in the studio at eight ...whew..but we all had a ball anyway even with our task master director..he even had me memorize my lines in the closet that i refused in the show to come out of because of the characters bout with agoraphobia....it would have been so easy to read them of the back of the door ..a belated thanks ken..well great fun ran by a legend norman lear..I would do it all over again in a heatbeat you guys are right hey norman wheres the video.

wow -- that really brings back some memories. What a great show

I, too, loved the series and can tribute it as the inspiration for my first published novel, StarChild (by Jim G. Styles), planting the idea in my mind from then on.

Needless to say I'd love to find the series available from somewhere like Amazon.com on DVD (or at least find out to who one can write suggesting so).

Hope I can post. Thanks, Chuck McCann, for posting, I met you in the 1960s, when you were signing autographs, and loved you from Rootie Kazootie, and your Gillete Commercial (which was brought back, after All That Glitters premiered). I am a big Chuck McCann fan, and was glad when the show premiered because I liked that commercial, and wanted to see it again. I loved your appearance in "The Greatest American Hero{ (another short-lived series that people DO remember! ABC ruined its chances with stupid time slot and because Ralph's original screen name Hinkley was like the stupid would-be assassin John Hinkeley, so they murdered the series--idiots! Reagon survived the shooting!) I was just looking to buy a DVD today, May 31, 2014, and it still isn't there. I also would love to see those other TV shows mentioned by the author, and also Phyllis Diller's "The Pruitts of Southampton." She was so funny.