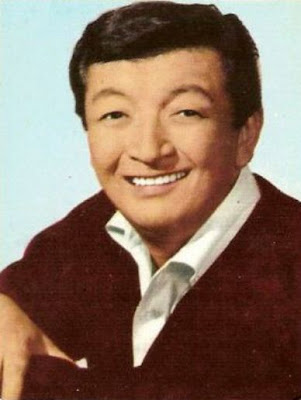 The festival's program notes (by Nani Ratnawati) refer to Soo's spirit as "alive and unyielding, in spite of the discrimination of his time," and that pretty much sums up his appeal and explains the inspirational quality hidden beneath his enjoyable broad-stroke comedy.

Adachi, San Francisco's Public Defender since 2002, dabbles in filmmaking on the side, having previously made the 2006 documentary, "The Slanted Screen," which, in a brisk 60 minutes, covers the various images of Asian men on screen, from Sessue Hayakawa to Harold and Kumar.

The advocate/filmmaker became fasincated by Soo when he discovered that the actor was born Goro Suzuki - to Japanese parents - despite his Chinese-sounding stage name. For years, Broadway legend has passed along the rumor that it was Gene Kelly who personally suggested Soo's name change when he directed him in the supporting role of Frankie Wing in Rodgers and Hammerstein's "Flower Drum Song" on Broadway.

There was already on Suzuki in the cast - Pat Suzuki who originated the role of Linda Low - and, besides, the Chinese-centric musical needed more Chinese in the cast. But Adachi's research found that Suzuki had actually changed his name to Soo much earlier - in order to secure work during the 1940s. The ploy worked. Soo became a staple of the nightclub circuit during and after World War II. In fact, he was famously billed in San Francisco's Chinatown as "China's funniest comedian."

Prior to his name change, Soo entertained inmates in a Japanese internment camp in Topaz, Utah with jokes and songs.

The Oakland native's big break came not in the stage version of "Flower Drum Song," but in Ross Hunter's 1961 film version, directed by Henry Koster who recruited Soo and upped him to the show's second male lead, Sammy Fong. Soo rewarded Ross and Koster by playing - and singing - the role as a hipster, in the ring-a-ding-ding style of Dean Martin.

Soo's Sammy Fong remains one of the film musical's most memorable characters. One could hardly imagine anyone else in the role. (Larry Blyden played it on stage; Blyden's wife, Carol Haney, choreographed.)

On screen, both big and small, he also starred in "Thoroughly Modern Millie," "The Green Berets," "Valentine's Day" and, of course, "Barney Miller," the hit sitcom he was doing when he succombed to cancer.

Adachi's film features archival photographs of Soo's life and career and testimonials and remembrances by past acting partners, including Nancy Kwan (of "Flower Drum Song"), old friends, fans and his daughter.

"You Don't Know Jack: The Jack Soo Story" gets an encore screening at the SFIAAFF at 7 p.m. on Wednesday, 18 March. Jeff Adachi will appear in person at both screenings.

Note in Passing: Adachi's "The Slanted Screen" is worth checking out. The film contains more than 50 film clips of depictions of Asian American male characters from Hollywood films, spanning nearly a century. It asks why and how stereotypic portrayals continue to persist, and why the roles for Asian American men are diminishing while the Asian American population is increasing. Interviewees include actors Mako, Cary-Hiroyuki Tagawa, James Shigeta, Dustin Nguyen, Will Yun Lee, Phillip Rhee, Tzi Ma, comedian Bobby Lee, producer Terence Chang, casting director Heidi Levitt and directors Gene Cajayon and Eric Byler.
Posted by joe baltake at 7:25 AM

I just saw RETURN FROM WITCH MOUNTAIN in which he had a small role and got to thinking about him. I hadn't seen BARNEY MILLER in quite a while.

Thanks! You're fast. I was still correcting typos when your comment came in. (Anyway, apologies for the typos.)