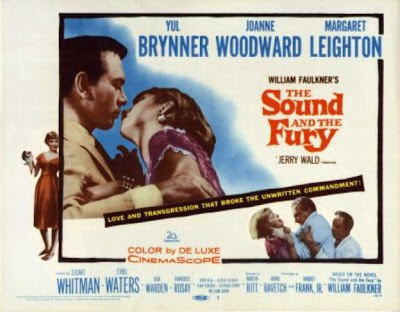 The long-running rumors of a planned remake of William Faulkner's "The Sound and the Fury" lend a certain urgency to this particular post.

By all means, check out Martin Ritt's splendid 1959 version of the material - that's if you can locate it, of course.

"The Sound and the Fury" was Ritt's second excursion into Faulkner territory. The year before, in 1958, he made the hugely entertaining and hugely popular "The Long, Hot Summer," Fox's hothouse title for Faulkner's "The Hamlet." Both films were adapted by Harriet Frank Jr. and Irving Ravetch and starred Joanne Woodward. 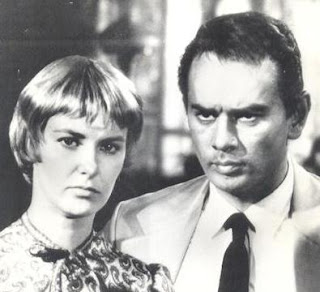 "The Sound and the Fury" paired Woodward with Yul Brynner (sporting a wig for the performance) and featured searing supporting work by the great Margaret Leighton, Jack Warden in his best screen performance ever, the singular character actor with that imposing voice, Albert Dekker, a young Stuart Whitman and the invaluable Ethel Waters.

The inspiration for any number of dysfunctional Southern-family films, Faulkner's work revolves around the troubled Compson clan, headed by the cruel Jason (Brynner), who is not actually a Compson by birth and who has a contentious relationship with his "niece" Quentin (Woodward), feeling rebellious and unloved after being abandoned by her mother Caddy (Leighton). Ritt's film is not entirely faithful to Faulkner's troubling and troublesome book but it fairly drips with decaying-south ambience and with first-rate performances. (Ritt was always wonderful with actors.)

Leighton and Warden, as the backwards Benjy, take the acting honors here, even though Brynner and Woodward are the emotional center of this fine work, and few scenes are as aching as Caddy's return home after a 17-year absence, with Leighton reaching out to Warden, both made affectingly mute by the stirring occasion.

One is tempted to look away from its raw intimacy.

Ritt's is a complex version of a complex book, long overdue for a DVD release by Fox.
Posted by joe baltake at 9:04 PM

Fox Movie Channel showed THE SOUND AND THE FURY on rotation about two years ago; however, it was not "restored", and the color was rather faded. But though it makes a hash of the novel, it does have splendid performances. (One problem is that it tries to end on a rather "hopeful" note, which is totally contrary to the novel's intent; but it followed THE LONG HOT SUMMER, which knocked up strands of several Faulkner stories and novels into a box office hit.)

But Fox was on a literary jag in the late 1950s: also missing has been TEN NORTH FREDERICK, which, if memory serves, had the best performance ever by Suzy Parker, as well as a good performance by Diane Varsi.

"Ten North Frederick" is a title that I've been meaning to showcase. I just tracked down a copy of it, probably taped off the Fox Channel. Yes, Suzy Parker is wonderful in it (as is the fascinating Diane Varsi), but then, I always had a weakness for Parker. I also liked her in "Kiss Them for Me" and "The Best of Everything." Right before she retired from acting, Parker made a film with her husband, Bradford Dillman, called "Circle of Deceit." I never saw it but always wanted to. Did you?

Alex North's score to "The Sound and the Fury" is one of my favorite compositions from him. North also scored "Long Hot Summer" and "Sanctuary"; I hope Fox releases a DVD set devoted to their Faulkner adaptations, like their Hemingway set.

Has anyone ever seen "The Story of Temple Drake" with Miriam Hopkins? It's based on "Sanctuary" and is supposed to be Pre-Code at its most jaw dropping. It's been suppressed for many years, though I suspect rights issues have something to do with that.

I agree with you on two counts - about just how terrific Alex North's scores are for the films you mention and that Fox should definitely do a boxed set devoted to its William Faulkner adaptations.

BTW, I wrote at length about "Sanctuary" in a tribute that I devoted to Lee Remick on 1 April, 2008. Here's the link:

Also, I'm with you about wanting to see Miriam Hopkins' "The Story of Temple Drake."

Thanks, Joe. I'll defintiely check out your "Sanctuary" write-up.

Yes, i think that Fox should do a Faulkner boxset to go along with the Hemingway boxset.

THE STORY OF TEMPLE DRAKE has been around in the past decade or so (but not on TV): it's one of those films which is often programmed when there's a pre-Code or Depression series (such as the "Breadlines & Chamoagne" series that's now at NYC's Film Forum). The print was restored before it started making the rounds, but the exact nature of the rights is uncertain (it's a Paramount film, but the rights to the novel were sold to Fox by 1958 when Paramount's rights lapsed), so that's the problem with getting that title on DVD. It's still pretty racy, and Miriam Hopkins is really sexy in it. (I do remember SANCTUARY, and the eerie scenes between Lee Remick and Odetta; Odetta was quite impressive.)

As for CIRCLE OF DECEIT, i have seen it, it's engrossing and has a fascinating plot (a woman intelligence officer has to pick someone who she thinks will be a coward, so that he can go on a mission and be captured and give false information to the Nazis), it's a Scope picture but has been shown pan-and-scan on the Fox Movie Channel. But what's really fascinating is that it is actually a remake of an original TV drama that Fox did in 1955, which starred Linda Darnell and Trevor Howard. (There was a time when Fox Movie Channel was showing the Fox TV dramas that were broadcast between 1954-57, in many cases, remakes of their most famous movies, such as a TV version of YOUNG MR. LINCOLN which starred Tom Tryon as Lincoln, or a remake of THE GHOST AND MRS. MUIR with Joan Fontaine.) This was one of the few times when a drama originated on TV for Fox and then was made into a feature film. (Which was happening with a lot of other TV dramas, cf. MARTY, THE BACHELOR PARTY, A CATERED AFFAIR, 12 ANGRY MEN.) In this case, CIRCLE OF DECEIT (i can't remember the title of the original TV drama, it wasn't the same) started out as a TV drama starring Linda Darnel and Trevor Howard, and then became a movie starring Suzy Parker and Bradford Dillman.

Thanks for the heads-up re "Circle of Deceit." As usual, you are an invaluable trove of movie knowledge.