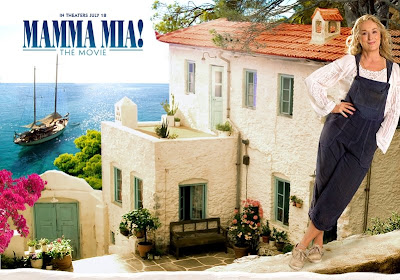 There's been a silent campaign for the past two decades or so to kill off - or at least, demonize - the film musical, and critics, whether they want to take ownership or not, have been complicit in this subversion with reviews alternately condescending, snarky and almost willfully ignorant.

These qualities have dominated the hilariously predictable initial reviews of Hollywood's newest musical, the ABBA-inspired "Mamma Mia!" It's been amusing to read some of the more representative reviews. (see Note in Passing below) On average, they've ranged from the begrudgingly favorable (i.e., those critics who had fun with the movie but don't want to necessarily admit it) to begrudingly unfavorable (those critics who resent they even had to sit through it, let alone had to actually write about it).

If you read between the lines, your basic review - tantamount to an exercise in self-aggrandizement - essentially claims, "Cool people don't like ABBA and, hey, I'm way too cool, you know."

Well, coolness be damned. I liked it. Of course, I like film musicals in general but not the ones that have been deemed "acceptable."

Full disclosure: I think (a) "West Side Story" is unwatchable, (b) "Cabaret" is excruciating, (c) "The Sound of Music" should be "put in a vault" (to borrow a favorite phrase from Disney Home Entertainment), and (d) that anything created by the late Bob Fosse is irritatingly mannered.

Now that I've all but destroyed my credibility, let me say this about "Mamma Mia!" It's a hugely satisfying hodgepodge of old Hollywood staples and conventions, taking a plotline reminiscent of the 1968 Melvin Frank-Gina Lollobrigida comedy, "Buona Sera, Mrs. Campbell," adding a middle-aged Gidget to the mix (named Donna and played by the very game and pert Meryl Streep, seemingly in tribute to pert Sandra Dee) and giving it the giddiness of the grand "let's-put-on-a-show" movie-musical tradition. Only in this case, it's a wedding that's put on, not a show.

As an added bonus, there's the gorgeous scenery (Kastani Beach, Greece), those songs (that dare you not to bob and smile), that cast (having the kind of fun that's contagious) and the joy of discovering a talented new star (Amanda Seyfried, who shrewdly plays Streep's daughter Sophie as a kid who's more mature and stable than her mother).

So, what's not to like? Just about the perfect summer movie, "Mamma Mia!" is like taking a tiny vacation.

But, hey, I way too uncool, you know. 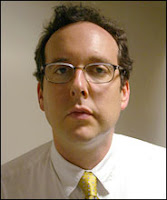 Note in Passing: Looking for a reason - any reason - to dislike the film, the always scintillating A.O. Scott of The New York Times came up with a whopper. Picking at nits, he writes:

"A song lyric refers to the 'time of the Flower Power.' (Surely you remember the Flower Power!) But Sophie sure doesn’t look 40. At one point, Harry recalls the Johnny Rotten T-shirt he had back when he knew Donna, which is 10 years closer to the mark but still about 10 years off."

Jeez, it's only a musical, Tony, and a rather frivolous one at that.

(Artwork: The always remarkable Streep goes diva in "Mamma Mia!," and Scott of the NY Times)
Posted by joe baltake at 2:16 PM

Say what? ABBA songs are tinny and synth-pop. That's they're natural state. That's what's so great about them. Sorry, but the reviews of the film exhibit plain, old film-crit snobbery.

Great to read this.

As a musical fan, I've been interested in seeing this. But the reviews, as you stated, have been very lukewarm, at best.

There's absolutely nothing wrong with it. Honest.

Terrific! And not uncool at all.

I saw it yesterday ( 7/18 ) right after seeing "The Dark Knight" ( paid for both ) and let me tell you, I have not seen two such great movies back to back in ages. Meryl Streep is a complete delight, she has a wonderful voice which has only had limited use in "Ironweed", "Postcards from the Edge", and "A Prairie Home Companion". And I would also like the to add that "Mamma Mia" features not only the great Julie Walters, but has the best cinematic use of Christine Baranski ever.

I never bothered to see the show because I thought it would be cheesy and feel prefricated, but they really worked the songs well into plot and I liked the pathos towards the end. Didn't seem forced. Good movie. Now I want to see the show.

I haven't seen any of the jukebox musicals, so I'm merely going on my experience of overhearing the "Mamma Mia!" and "Jersey Boys" soundtracks at my parents house. It's the difference between great music and what amounts to a lousy cover band of same. You can love classic CCR songs without wanting to see Credence Clearwater Revisited massacre them at the county fair.

I LOVE MAMA MIA! This is the first film I've seen in years I can watch again and again! It is sooooo much FUN! It is to me what the Rocky Horror Picture Show was to many people! Great cast! Beautiful to watch! Much humor! Wonderful songs. I could go on and on. You have to let down your hair and love this film. In this day and age, not too many people seem to know how to do that!