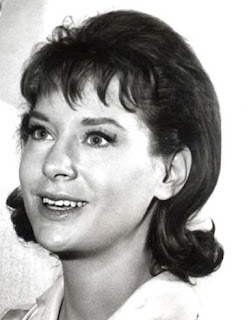 The appealing Lois Nettleton, who died on Friday, January 18th, was one of those criminally-neglected talents so pervasive in show business - an accomplished stage actress who was wooed into films by a studio that had no idea of what to do with her and left her to bide her time in the vast wasteland of television.

With the proper handling, she could have been a formidable competitor for Joanne Woodward.

Nettleton was already 35 - and had several Broadway credits behind her - when she made her official film debut in MGM's adaptation of Tennessee Williams' only comedy, the underrated "Period of Adjustment," a vivid criticism of unchecked, all-American male chauvinism. (She had a bit part five years earlier in Elia Kazan's "Face in the Crowd.") The film also marked the directorial debut of George Roy Hill, and I'd like to think that Hill was instrumental in the signing of Nettleton.

She played the role of Dorothea Baitz, a housewife and mother living under the crush of her overbearing husband Ralph (Tony Franciosa) - a woman whose long-delayed libertion unexpectedly comes under the guidance of a ditz named Isabel Haverstick (Jane Fonda), who is married to Ralph's best friend, George (Jim Hutton.) On stage, in the 1960 Broadway production, also directed by Hill, these roles were played by Rosemary Murphy, James Daly, Barbara Baxley and Robert Webber, respectively.

Despite enthusiastic reviews for her performance, Nettleton was rushed by MGM into two of its less illustrious programmers - Henry Levin's "Come Fly with Me" (1963) and Burt Kennedy's "Mail-Order Bride" (1964). And then she languished in TVland until the studio cast her in 1969's "The Good Guys and the Bad Guys" and 1970's "Dirty Dingus Magee"," both directed by Kennedy.

Uneventful best describes what follows. She played opposite Richard Harris (and the child Jodie Foster) in Don Taylor's "Echoes of a Summer" (1976) and had the truncated role of Burt Reynolds' temporary love interest in Colin Higgin's film of "The Best Little Whorehouse in Texas" (1982), nothing of great interest. Nettleton's most interesting late-career credit may have been a film directed by the actor Conrad Janis, 1994's "The Feminine Touch," which reteamed George Segal with Elliott Gould. I never saw it and I know of no one who has.

Nevertheless, if she did nothing else on film, her commanding, heartbreaking turn in Hill's "Period of Adjustment" was enough to qualify Lois Nettleton as a great American screen actress.

Anyone interested in perusing some 2060 of my film reviews, dating back to 1994, can do so by simply going to RottenTomatoes.Com
Posted by joe baltake at 1:35 PM

Lois Nettleton. I agree, a sad waste. She had the talent and good looks to be a major film star.

A sweet, sweet actress. Thank you for the tribute

Like Pleshette, she had that kind of "approachable" sex appeal that should have been box office gold. Even though she rarely got a great part in TV, at least she was working. Seems like I saw her practically every week growing up, guest starring all over the place.

I. for one, am impressed that she essentially had a one-film career and still prevailed.

I think, in intending to praise Lois Nettleton, you are unintentionally giving her short shrift. She didn't become a huge movie star, but she did tons of Broadway and theatre roles, and survived in the business for over 50 years. It's clear that you aren't impressed with her TV credentials, but she always gave excellent performances in them and the sheer volume of them go on forever and forever. Who cares if she didn't end up a movie star? She was a respected and successful character actress. She accomplished a lot in her lifetime and won 2 Emmys and was nominated for a Tony. I'm sorry if I'm being defensive, but I knew Lois personally and she never felt short-changed about her career. She knew she had had a good ride and wasn't envious or jealous of anyone else's success. She didn't care what the medium was, whether it was film, TV or theatre, and the tone of your piece sounds more negative than it should be.

I adored Lois Nettleton and I had hoped that came through in my little appreciation of her. Sorry if it seems as if I slighted her. I always thought she should have gone further in films and, believe me, it never entered my mind that she might have been envious of actresses who were more well-known. I appreciate and admire your defense of her. You're a good friend.

I didn't mean to be snarly.

All I meant by my comments were that, rather than dismiss the bulk of her achievements, and lament almost entirely on what her career was not, it would have been a better tribute to celebrate what her career nevertheless was.

You weren't snarly at all. That's not what I said. I said I appreciated your defense of your friend. As for Nettleton's TV career, I confess that I'm not that acquainted with it. I've seen some of her TV performances but obviously not all of them. Nevertheless, she never failed to impress.

Point taken. Nevertheless, I am grateful you took the time to write about her. I've been concerned that her passing had been overlooked by most of the mainstream media.

I agree with anonymous....I have followed her career a long time, never knew her personally, but she had some phenomenal roles on TV , on stage and in the movies...and she was proud to be a 'gypsy actress' a character actress, who could do it all and she did not want to be a star, but a great actress. Please look at her phenomenal performance in 1973 as Blanche Dubois , her incredible transformation in the Route 66 episode, Suppose I said I was the Queen of Spain and the brilliant speech she gives at the end of it about acting....twice she played a lesbian, once when it was the first representation on TV (Medical center 1973) and it could have hurt her career in those homophobic times-she was fuckin gutsy, smart and brave in her choices-her TV work was NOT minor....She was great in Period of Adjustment, but also chose other roles as a 'nobody'-often played the underdog in an industry that stereotypes and objectifies women. She worked hard and had an career from her performance in a play from 1949 until the last year she died-nearly 60 years. That is a lot to celebrate and be proud of. I totally loved and admire her....she was one of my heroes.

Lynx: Lovely, absolutely lovely. Thanks for sharing your views of this great, under-appreciated actress.

She didn't have a one-film career. She was wonderful in "The Honkers" and hilarious in "Dirty Dingus Magee". She was also great in the TV movies "Weekend of Terror", "Women in Chains" and, especially, "Fear on Trial". She had a major role in "The Man in the Glass Booth", as well.
She won 2 Emmys and was nominated for 4 or 5 others. Plus she was nominated for a Tony Award.
Lois did Broadway and Off-Broadway, soaps, feature films, TV movies, voice work, starred in 3 sitcoms and did guest shots on TV. That, to me, is a very accomplished career. The woman worked constantly for 60 years.

I was sitting here at 4am watching her on an old episode of Twilight Zone. I instantly recognized her face and name, and for me that's a big deal. I was thinking, "what a babe, she's hot, great eyes, no junk in the trunk though"

I wondered what she's up to in her autumn years only to discover her passing at 80. Your backhanded tribute did short change her, but you made nice, so it's all good

@Philip: You are right. She is an established actress. Whether it be lead role or supporting role it still important that she gave her best on that time.

i am also a great fan of lois nettleton. she was a wonderful actress and i will miss her dearly.


An amazing actress, we will miss her talent and beauty!

I am only of Lois Nettleton's last remaining relatives. For the record, she was the hardest working person I have ever met and her dedication to her craft was nothing short of inspirational. I grew up with her coming over and her amazing kindness, combined with her passion for acting, inspired me as a creative person. She never got the recognition she deserved but carried on because she loved it. Her cancer was diagnosed in November of 2006 and it was a losing battle, though she was forever upbeat. One of my last memories of her while she was functioning was the both of us going to Sunday Mass. She was a devout Catholic till the end. I saw her a few days before she died in the hospital. I miss her amazing stretch of presence every single day. Thank you all for kind words and remembering her. It means a great deal.

And thank you, Mike, for sharing your personal memories of a lovely actress. -J