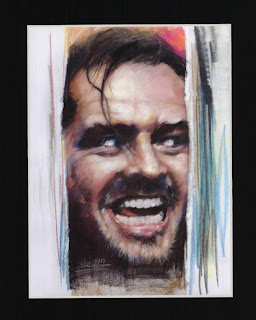 First, a big bravo to Sean Burns, a movie critic at The Philadelphia Weekly, who summed up Rob Reiner's unfortunate "The Bucket List" by quipping that "it makes Mitch Albom look like John Cassavetes."

I found myself fondly remembering the subtle Jack Nicholson of "Carnal Knowledge" and "The King of Marvin Gardens." But when did he become that potentate in sunglasses sitting in the front row of every movie awards show? When did it start? Was it "One Flew Over the Cuckoo's Nest"? "The Shining"? "Terms of Endearment"? Or was it as recent as "As Good as It Gets" or "Something's Gotta Give"?

When did Jack Nicholson go from being one of our premiere actors to being ... Just Jack? Maybe you have an answer.

Note in Passing: Our guy did take a break from being Jack in Martin Scorsese's "The Departed." He hasn't completely disappeared within a mist of Hollywood hype.

Anyone interested in perusing some 2060 of my film reviews, dating back to 1994, can do so by simply going to RottenTomatoes.Com
Posted by joe baltake at 1:52 PM

C'mon Joe, he was more Jack in "The Departed" than he was in "As Good as it Gets". But for true non-Jack performances take a look at "The Pledge" and "The Crossing Guard" both by Sean Penn.

As for when Jack became Jack, it would be "The Shining". That's when he started cashing in on the whole nutcase/wild man persona that he set up in "One Flew Over the Cuckoo's Nest". He hit his biggest payday with it when he did "Batman".

Agree with j kaiser. The Penn films aren't "Jack," and I think "About Schmidt" was an exception as well.

I don't know, guys. I think "The Departed" was a real departure for Nicholson who recently has been largely hamming it up on screen. I do agree with you about his effectiveness in the two Penn films, however.

By the by, I saw "The Bucket List" yesterday, it needed the actors to swap roles and a director like James L. Brooks. Jack's role would have been perfect for the late great Jack Lemmon.

Great minds think alike. After the screening of this film, I said to my wife, "This is like the Lemmon-Matthau film that never got made." I also agree - the guys should have switched roles. I'd give anything to see Freeman in a non-saintly role again.

He became Jack in the Mike Nichols movies "Heartburn" and "Wolf." Nichols was intimidated by him. While I absolutely agree that "The Bucket List" is the unmade Lemmon/Matthau film (or "Odd Couple" TV episode, I disagree with Joe about "The Departed." Nicholson's the ham in an otherwise lean, almost vegan, suspenser.