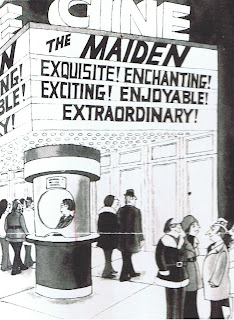 "It was Exquisite! Enchanting! Exciting! Enjoyable! And Extraordinary!"


Given the sheer number of movies now produced every year by the studios and the independents, the odds that most of them aren't very good are high. This provides something of a quandary for critics who occasionally have to find something, anything, to praise - or risk being branded (by readers and editors alike) as miserable cranks or curmudgeons deserving of their misery.

Modern film reviewing is now a relentless treadmill process, with untimely screenings and tight deadline schedules often resulting in hastily-thought-out reviews. Movies are routinely overrated (or underrated, as the case may be). The luxury of taking time to "read" a film - to think about it and savor it in a leisurely fashion - is now largely a thing of the past.

Today, I'm eshewing the usual suspects popping up on the various year-end lists to instead single out (alphabetically) those ten titles that have been seriously overrated by our overworked movie critics. I hasten to add that these are not bad or even inferior films, just wildly overrated ones. Here goes:

-"The Diving Bell and the Butterfly"

Anyone interested in perusing some 2060 of my film reviews, dating back to 1994, can do so by simply going to RottenTomatoes.Com
Posted by joe baltake at 8:11 PM

I always bristle a bit at the concept of "overrated." Assuming critics are offering an honest opinion, how can it be an over- or under-rating? There can be no real standard, because it's different for every individual. If I really like "Knocked Up," you can't tell me it's because I'm overrating it. I simply really like it, and not because some critics did. If you don't like it, I presume it's because you simply don't like it, regardless of what you perceive the general consensus to be.

I found "Norbit," which you liked and defended as "underrated," to be a depressingly insensitive, lazy piece of work with a tired plot, stereotypical characters and weak slapstick. But do I think you overrated it? No, I think you rated it honestly.

Eh, I'm probably just nitpicking about semantics here, but you know what I mean.

One more thought -- I've seen mixed to negative reviews on all of those films, as well as raves. So how is the "overrated" designation determined? Is it just a perception that the majority of reviews are positive, perhaps based on the rather unscientific Tomatometer or something?

I always love it when a promo for a movie trumpets "Critics agree!" and then quotes the only 2 or 3 positive comments they could find. :)

Having worked as a critic, I have deeply felt opinions about how movies are ultimately rated. I've become keenly aware that few films are as good as their rave reviews imply and few films are as bad as their pans suggest. Criticism has just become another example of society's penchant for excessiveness and overstatement. "Juno," for example, is a wonderful little film anchored by an annoyingly quirky (and just plain annoying) lead performance, but neither the film nor its star comes anywhere near the greatness that the reviews have suggested.

I have been - and still am - guilty of all of the above. Yes, I probably did overrated "Norbit," but, frankly, I was proud to be a majority of one on that film. Most overrated films bring out the sheep mentality in critics. (I may be fooling myself, but for me, a truly overrated film is one that has the critics forming an unofficial, overbearing Admiration Society onbehalf of the movie in question.)

I agree that those "The Critics Agree" TV ads (featuring quotes from the usual suspects - critics who practically work now for the studios' marketing departments) are absurd.

P.S. to jbryant. You're right when you contend that the films on my list received largely mixed reviews. A majority of the films these days do. But the way the publicity machine is set-up, it's made to seem that such titles as "The Diving Bell and the Butterfly" and "I'm Not There" received unanimously rave reviews. (Let's fact it, most people only see the quotes in the ads, not the actual reviews and certainly not all of the reviews that a movie recieves.)

One film pick that I should annotate: "Charlie Wilson's War," an enjoyable but widly facile film with a script that explains practically nothing. What, for example, is the motivation of Julia Roberts' character and her involvement in the situation dramatized in the movie? If anyone has any ideas, please share. (Also, your answer should be something that's actually reflected in the film and not merely assumed.)

"...a truly overrated film is one that has the critics forming an unofficial, overbearing Admiration Society onbehalf of the movie in question."

Hear, hear. And with that definition in mind, my choice for most overrated movie of 2007 is "No Country For Old Men." It had good aspects: all the actors were fine, and the sense of place conveyed by the photography was memorable. However - and it's a major "however," in my view - the Coens' grasp of the Javier Bardem character was shaky at best, and flat-out contradictory at worst. Throughout the movie, I had the strong sense that the Coens wanted us to recoil in horror at the character's evil nature, but at the same time they couldn't help thinking he was one cool dude, too. The Coens are never going to outgrow the 15-year-old wise-ass version of themselves, with the result being a movie that wants to convey the intractable evil that exists in the world, but can't help giggling at how funny the big gobs of blood flying through the air are when Bardem takes out another victim. The more critics insist this is a "perfect" movie (an adjective used by a critic I respect), the more I find myself saying, "No."

You bring up excellent points. For me, the only thing worse than the studio-created buzz orchestrated around a certain film is the buzz created by critics (and then fortified by critics' groups) for a favored film. Fighting either one is almost impossible. What's odd is that critics resent studio-created buzz but indulge in the same thing themselves.

But when you actually like a film that has been highly acclaimed, do you feel slightly ashamed, as though you've been drinking the critical Kool-Aid or something? :)

At any rate, I think the biggest bummer is when the pendulum swings all the way around, causing the very real virtues of some overhyped films to be dismissed as "overrated." I guess I just think it's all so related to perception and overhyping as to mean nothing on a critical level. We've all seen "overrated" films from years past evolve into today's "underrated gems" once the hype has died down and newer generations of critics look at them with fresh eyes.

Actually, I've always disliked being "part of the crowd" in any way, but sometimes I am. Anyway, it's become increasingly difficult to see a film for itself. Too much gets in the way. Too many distractions - from studio hype to critical hype. It's almost impossible to go into a film in a virginal state, so to speak. It's as if we've seen the film before we've actually viewed it. I agree. It's only when the dust - and the hype - settles that we can see a movie for what it is. Then we can watch it in a relaxed, accepting way, without any urgency (or preconceived notions) attached to it.

Since it was my favorite movie of the year, it probably makes no sense for me to say that No Country for Old Men is also the most overrated, but the fawning over that movie is actually more than a little annoying.

Somehow I prefer it when a movie I love sharply divides the critics and the audience. Being a part of the crowd makes me feel like I'm getting soft.

Juno takes my prize for the widest gulf between critical/audience reaction and my own response, however. Nothing against the many people who so clearly love it, but it did nothing for me.

And I would HOPE that critics enjoy their buzz. What is the point of critical writing if the author doesn't hope to influence the reader in some way? Studio buzz is merely marketing.

As I said earlier, "Juno" is a wonderful little film anchored by an annoyingly quirky (and just plain annoying) lead performance, but neither the film nor its star comes anywhere near the greatness that the reviews have suggested.

Actually, critics agree on very little. They disagree on more than just the quality and worthiness of movies. I mean, if you ask 100 different critics for their ideas on just how influential the profession is, you'll get 100 different answers. Some get high on the idea of their "buzz" - having clout with their readers and the studios. Some are uncomfortable with it. Some deny it altogether. But there is a certain comfort that comes from being in the majority on a film. It's validating and it's safe. Believe me, a critic who dares to march to a different drummer, even occasionally, comes to feel like an outsider with his/her peers. And I won't even get into how annoying it is to explain your alternative view(s) to an editor.