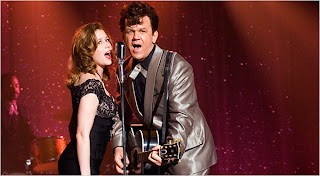 There really isn't much to say about the sadly inert, new Judd Apatow-driven comedy, "Walk Hard - The Dewey Cox Story," an alleged spoof of that subgenre, the crooner biopic. Not a bad idea but, as executed here, that's all it is - an idea, unfulfilled.

The title alone is emblematic of the film's desperately infantile humor - "cox," being the operative word. Cox. Get it? Nudge-nudge. What can I say? Some critics managed to locate humor in it.

I do, however, have one urgent question that I hope at least one person out there can answer: What is with the three - count 'em - three close-up shots of the flacid penis of a faceless, unidentified day player in the film's hotel orgy sequence? Is Apatow that anxious to obtain R-ratings for his films? I ask because nothing in this witless film warrants an R-rating, aside from the poor extra's penis whose inclusion, incidentally, is wildly gratuitous and which does nothing to advance what passes for plot here. But I'm happy to report that penis in question isn't particularly large; in fact, it's somewhat shorter than the attendant testicles behind it.

But I digress... The main problem with "Walk Hard - The Dewey Cox Story" is that it isn't remotely funny, followed by the fact that it recycles ideas and situations from other Apatow comedies from the past two or three years. If the scene of star John C. Reilly as rebel country singer Dewey Cox maniacally running around the street in just a jock strap seems naggingly familiar, that's because Will Ferrell did approximately the same thing just last year in Adam McKay's far superior "Talladega Nights - The Ballad of Ricky Bobby," which Apatow produced and in which Reilly co-starred. In fact, much of "Walk Hard" feels like a Will Ferrell reject.

Although Jake Kasdan is nominally listed as the director here, Apatow's finger prints are all over "Walk Hard." He even managed to encourage his unofficial mentor Harold Ramis to do a walk-on as a Hasidic record producer, a bit that's so offensive that even anti-Semites might be offended.

Current reservations aside, I think Apatow is generally great. His "Freaks and Geeks" TV series was a minor delight, while his 2005 directorial debut "The 40-Year-Old Virgin" was something of a heartening revelation - a breezy, in-your-face male-fantasy comedy but one with a big heart.

Nevertheless, Apatow's attempts to imitate the forumla in subsequent films - "Knocked Up" (whose smart heroine defied even loose movie-comedy logic and actually hooked up with a slacker/loser) and "Superbad" (whose main hero nurtured an out-of-control penis obsession) - have hinted at an early creative bankruptcy. Regressive males remain interesting - and droll - for just so long. After that, the characters become unattractive and their humor desperate and strained.

The critics who prematurely, and rather hastily, declared Apatow a comic genius - the latest Golden Boy in Hollywood to have all the answers for what ails the industry - have done him a disservice. He's no Preston Struges, as one noted reviewer implied (or, rather, exaggerated). And he's no Billy Wilder. At least, not yet. But he could be - if he's willing to move on, evolve.

As for the talented Reilly, between this film and "Criminal," it's become apparent that he's not ready to carry a film. He's one of film's top and most reliable character actors/second bananas. Given the right role and the right opportunity, he might grow into a Star. But "Walk Hard" doesn't provide that role.

Note in Passing: For what it's worth, "Walk Hard" looks great - thanks in large part to the contributions of cinematographer Uta Briesewitz, production designer Jefferson Sage, set decorator Dominic Silvestri and costume designer Debra McQuire. Actually, it looks too good. Too slick. Its opulence works against the antic comedy it's attempting.

Anyone interested in perusing some 2060 of my film reviews, dating back to 1994, can do so by simply going to RottenTomatoes.Com
Posted by joe baltake at 12:01 PM

It's too bad this one misses the mark. Music biopics are ripe for the plucking.

I admit it sounds like I enjoyed Knocked Up more than you, but it's also fair to say that film is rapidly fading from my memory.

It would be a shame if Apatow is creatively spent.

It's too bad this one misses the mark. Music biopics are ripe for the plucking.

I admit it sounds like I enjoyed Knocked Up more than you, but it's also fair to say that film is rapidly fading from my memory.

It would be a shame if Apatow is creatively spent.

I think "Undeclared" is Apatow's best work. It fully captures the fun of college without all that pesky angst of high school/"Freaks and Geeks". It's also a lot more fun seeing college students who are afraid to grow up than seeing an older twentysomething (Knocked Up) with the same issues.

Most disappointing.
All I expected was some funny, and it had very little of it.
Maybe Judd Apatow, who I'm only barely familiar with, should take a little break?
I DO know he's put out about, what, 20 movies in 3 years!

I agree. I don't think I laughed once, and I usually love low-down humor. I smiled a lot, that's all. I still think is blows a great idea and looms as a missed opportunity. Also, to repeat myself, the film looks too glossy for its own good. It should be more shaggy-looking.

"Freaks and Geeks" a minor delight? Have to disagree there, since it's maybe my favorite series of all time. And Apatow shares much credit for its success with creator/producer/writer Paul Feig.

As for "Walk Hard," I don't think it was an unqualified success by any means, but I got a fair amount of laughs from it. I think its shortcomings are due to Apatow and Kasdan working outside their comfort zone. It's nothing like "Freaks and Geeks," "Zero Effect," "Knocked Up" or "Superbad," but clearly these guys are more comfortable with the comparative realism of those works than with the Zucker-Abrahams-Zucker style of parody. Also, the musical biopic genre isn't the ripest of targets. But the songs were nicely done and I thought Reilly did a great job.

I also disagree about the look of the film. I think they simply wanted it to look like the films they were parodying. Unnecessary perhaps, but not a big distraction for me.

Ultimately, of course, there's not much point in arguing comedy. If you laughed, it worked for you. If not, not.

jbryant: You are so right. One can't realistically debate the merits of comedy - whether it be a film comedy, a TV sitcom or a stand-up routine. We all laugh at different things - hence, my appreciation of "Norbit" and disdain for "Walk Hard." I could go into a deeper analysis of each film, but the bottom line is that one film made me laugh, the other didn't. It has more to do with me than with the films themselves.

And Walk Hard is amazing, especially the extended edition with bonus footage