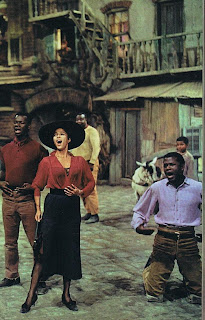 It's not clear who's behind the screenings. It's most likely the Gershwin estate which controls the film and not Columbia Pictures, which originally released the Sam Goldwyn production. And so, by extention, the condition of the print that will be screened is also not clear. I've heard nothing about the film being restored. So will the film be projected in Todd-AO or traditional 'scope? Your guess is as good as mine.

Apparently, the screenings have something to do with Otto Preminger's centennial.

Preminger, whose work I adore, was not the original director of "Porgy and Bess." Goldwyn had initially enlisted the equally great Rouben Mamoulian, who staged the original 1935 production on Broadway. Mamoulian, who will forever be honored for his "Love Me Tonight" (1932), among many others, apparently wanted location shooting, but Goldwyn favored the soundstage arena. Reportedly, all that's left of Mamoulian's work is the "Good Morning, Sistuh" number at the beginning of the final scene. 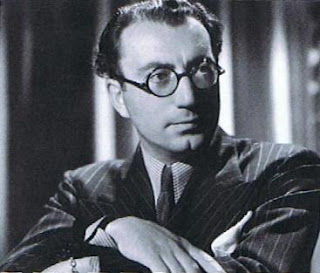 According to Wikipedia, the film "was broadcast on network television only once, on the night of March 5th, 1967, on ABC-TV. It has not been seen in its entirety on network TV since, although clips have been shown on some of the American Film Institute specials. Ira Gershwin and the Gershwin estate were unhappy with the film, and rescinded the rights to it in the 1970s. As a result, the film has never been on video or DVD, and few public screenings have been permitted, albeit begrudgingly. It is believed that the original negative is in dire need of a restoration."

Sidney Poitier and Dorothy Dandridge, who play the title roles, had voices dubbed in songs. Robert McFerrin and Adele Addison, respectively. Diahann Carroll, although an accomplished singer, had her voice dubbed for the role of Clara by Loulie Jean Norman.

Wikipedia adds: "The film cut much of the music, turning the musical recitatives into spoken dialogue, as was done in the 1942 Broadway revival of the show. Gershwin's original underscoring, which is heard constantly in the opera during the recitatives as well as the two fight scenes, was not used, having been replaced by Andre Previn's own. (Previn adapted and conducted the music for the film.)"

Robert McFerrin was, not surprisingly, the father of "Don't Worry, Be Happy" singer Bobby McFerrin. Doing the voice for Porgy was his only film credit.

I've never seen the film, but share your enthusiasm for Preminger, particularly Anatomy of a Murder, Daisy Kenyon, Laura, and Fallen Angel. I believe a new bio of him is on the way or just came out.

There's a lot of controversy around this movie... There were many complaints by Afroamericans about the racial stereotypes.

Apparently, Cab Calloway wanted to cast for Sportin' Life (Gershwin crafted the character after him). Sam Goldwyn and Judy Garland first agreed to get Cab in the role of Sportin' Life: that was logical because Calloway ran the Broadway re-run in 1952 and the European and US tours in 1953.
But Sammy Davis Jr. wanted that cast so much. Goldwyn once said that he didn't want that "little monkey" (dixit), but Sammy Davis said to Goldwyn that he was ready to play for free. That willingness thrilled Goldwin's mind and he accepted. Sammy Davis Jr. was so happy to get the role that he offered a watch to each member of the crew on the first day of shooting.


Unfortunately, the filming stopped because of a fire that destroyed the set (July 1958). During this "intermission", Robert Mamoulian was fired, replaced by Preminger.
From this moment on, the mood on the set was awful. Preminger sticked to his reputation, yelling at everyone, in particular at Sidney Poitier (Poitier certainly didn't care too much, because he fell in love with Diahann Carroll - Clara in the movie - on the set).

Another funny point about the dubbing is that Sammy Davis played and sung the role in the movie. But, due to exclusivity issues in his contract, he wasn't allowed to sing on the Soundtrack album. And guess who sings on it?? Cab Calloway, of course!

You'll find a complete note about this and more about Cab Calloway on my (French) website: www.thehidehoblog.com