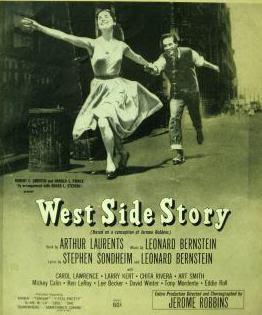 Film critic David Denby has the following to say about "West Side Story" in the September 17th edition of The New Yorker magazine:

"It is ironic that 'West Side Story,' a plea for ethnic tolerance by four Jewish liberals - Leonard Bernstein (composer), Stephen Sondheim (lyricist), Arthur Laurents (book) and Jerome Robbins (choreographer) - has now become difficult to revive in New York. Latinos have complained that its view of Puerto Ricans is stereotyped; producers have worried that its 'Cool, Daddy-O' slang new seems quaint. Yet the show, which opened fifty years ago, is a masterpiece of American musical theatre - perhaps the masterpiece. If the material is unfamiliar to you, skip the dreadful Oscar-winning movie version of 1961, with its embarrassing cast and hashed score and choreography. The original cast album, starring Carol Lawrence and Larry Kert, is ardent and heartbreaking, and Bernstein's own later recording makes a good case for the piece as an American opera. 'West Side Story' is now performed in prisons and gang-ridden neighborhoods, where it is used as therapy, and in summer-stock productions, where it leaps off the stage. It's time for a full-scale New York revival."

First, a question to Denby about this wildly gratuitous piece: Who asked you, anyway? (Can't the editors at The New Yorker simply say "no" when one of its writers comes up with a bad, pointless idea?)

Secondly, the stereotypes that litter this show/movie are the least of it.

Finally, I agree with him that the 1961 film version is pretty bad. It's been bad for years, hasn't aged well at all. But the problem is not the cast or the choreography (which, I hasten to remind Denby, is by Robbins himself).

No, the problem is that Ernest Lehman, who wrote the adaptation, was way to faithful to Laurents' arch stage script. The music and dancing are fine; everything in-between is an offense. The dialogue in WSS, whether on stage or on film, is really rough on the ears. Those producers who worry about all those dated "Daddy-Os" are correct. The only way to revive the show is to completely rewrite it.

An alternative, of course, would be to declare a moritorium on it. Put it in mothballs and let it rest in peace. Forget about it and move on.

P.S. That original cast album that Denby finds so "ardent and heartbreaking," actually sounds rather tinny compared to the film's soundtrack. Also, the original cast album doesn't "star" Carol Lawrence and Larry Kert. It features them (among others).

Feel free to disagree. And fee free to bark at me, Who asked you, anyway?

(Artwork: The poster from the original 1957 stage production of "West Side Story")

Anyone interested in perusing some 2060 of my film reviews, dating back to 1994, can do so by simply going to RottenTomatoes.Com
Posted by joe baltake at 9:02 AM

I for one would love to see an update. Skinheads Vs. Crips. Some of the songs, "Shaniqua, I just met a girl named Shaniqua", "Dead Officer Krupkee". The skinheads would sing "I like it White in America".
Maybe Sondheim could update some of the songs to be rapped? It would only be one act though, because the gangs would mow each other down with uzis during the rumble.

Your idea is a good one. It's the only way the thing would work these days.

I dunno, don't we like revivals (when we do like them) partly because they capture something about our cultural past? Of course, it's nice if they resonate with the contemporary zeitgeist, too, and maybe revivals should only be done when the material takes on a new relevance. But even though West Side Story isn't likely to prove as timeless as its Shakespearean source (after all, it was conceived as a then-modern take on Romeo and Juliet, so it has naturally become "dated"), there's still the great music and the nostalgia factor. That should be enough to keep it from fading into the mists of time.

Could not disagree more strongly with the notion of updating "West Side Story." I'd say: keep the '50s-isms, and play it as an historic artifact.

As for "cast album" versus "soundtrack album" ... I love 'em both, but they *do* have a different sound. And should be respected as such. The "cast album" as a brilliant, Rossini-like sound, whereas the sound for the soundtrack is more Mahlerian and neo-Romantric.

Not that I'm a "West Side Story" freak, mind you. I prefer "Candide," if the truth be known. But there's much that's fine about "WSS."

Oh, and my view of the Wise/Robins movie is pretty much that of Kael in "Kiss Kiss Bang Bang." It certainly was witty of her to liken Natalie Wood's Maria to the robot Maria of Lang's "Metropolis" ...

When I refer to a "rewrite," I think they should dump Laurents' book for WSS and start over, retaining all the songs and dances, of course.

Re Kael's comment on Wood, she was a notorious Natalie Wood hater. I love Kael but I thoroughly disagree with her on Wood, who I think was great.

Critics of WSS often complain about Wood and Beymer in the film, but I think they're fine, especially Wood. (Let's face it: Beymer's role is unplayable; the character makes no sense.) Wood was criticized for her accent in the film, which many think is exaggerated, but no more exaggerated than the intonations and inflections of Rita Moreno and George Chakiris - who, in my opinion, get a free pass on this subject because they're ethnic types, and Wood isn't.

Also, I'm weary of critics referring to the dubbing of both Wood and Beymer in the film when Moreno and Russ Tamblyn were also reportedly dubbed (even though they had musical backgrounds). Producer Saul Chaplin was famous for doing that. Remember he dubbed in the voice of Juanita Hall for "South Pacific," a role that the late actress originated on stage. Go figure.

The title of the appropriate Kael collection is, of course, "I Lost It At The Movies," rather than "Kiss Kiss Bang Bang." Oops.

It was Betty Wand, who dubbed for Leslie Caron in "Gigi," whose singing was used for Rita Moreno. IMDb lists her as only doing it for "A Boy Like That" and "I Have A Love." They also list Wand as the singing voice for Kay Kendall in "Les Girls."

For what it's worth, I think Tamblyn gives the best performance in WSS, but even he's way too old for the film. Anyway, I still can't believe that the Academy threw away two Oscars on Charkiris and Moreno. As usual, it pays to be in a popular movie at awards time.

I don't know about Moreno, but Chakiris won because
Jackie Gleason ( The Hustler ), George C. Scott ( The Hustler ), and Montgomery Clift ( Judgement at Nuremberg ) split the supporting actor vote with strong performances.

Same thing happened in 1972 when Joel Grey won for Cabaret. He was up against Robert DuVall, James Caan, and Al Pacino ( why he didn't get a lead nomination instead of Brando I'll never understand ) in The Godfather.

Crowded categories are a killer.

they sure don't make 'em like they used to!

Re-write it? Re-write it into what? It's West Side Story. Write your own musical. The whole point is that it is what the authors wrote at that time to tell that story. A cleaned up "politically correct" script would be an afront to the whole enterprise.

If you can't get past some 50's slang and portrayal of PR's in a different manner than they might be depicted today, how do you manage to watch any other period production, let alone a vintage one?

And on top of that, compare the treatment the PR's get to the maner black people were depicted from the 30s into the 60s or beyond. The PR's might not be any more nuanced than the Pollocks are, but if you'll give full weight to the lyrics and dialogue, it sure seems that they are granted as full a humanity as anyone else in the movie, which is more so than in most musicals certainly.

And there is a remarkably subversive undertone to both script and some of the songs that is quite surprising for a work that was such a popular hit in an era often written off in popular history as one of only a blind and narrow conformity.

Admittedly the movie has its own limitations, but several of the criticisms level at it above tell us a lot more about ourselves today than they do about WSS way back when. If some parts are dated, somethings at the core of WSS are timeless, too, and it's all the more remarkable to see those timeless aspects emerge whenever the story is told.

Think of the stray "Daddy-O" as the verbal equivalant of black-and-white film. Do we need to colorize a movie to make it relevant? To make it "cool" enough to watch?

"PR"? Public Relations? Am I missing something here?