A.O. Scott on "License to Wed"

Unfortunate films tend to bring out a critic's sense of humor and this is especially true of The New York Times' A.O. Scott in his delicious critique of Robin Williams' new comedy, "License to Wed." Here's a sampling from his July 3rd review: 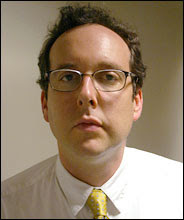 "... I will confess that the only thing that kept me watching 'License to Wed' until the end (apart from being paid to do so) was the faith, perhaps misplaced, that I will not see a worse movie this year."

Catch the rest of Tony's review and have a good time.

Anyone interested in perusing some 2060 of my film reviews, dating back to 1994, can do so by simply going to RottenTomatoes.Com
Posted by joe baltake at 7:46 PM