Considering how kid-centric society has become, it came as no surprise whatsover that George Ratliff's brilliant "Joshua" lasted little more than a week in most markets.

What's been thoroughly unexpected, however, is that fact that (1) it managed to get made in the first place and then (2) was picked up for distribution by one of the mini-majors, the ever enterprising and daring Fox Searchlight. 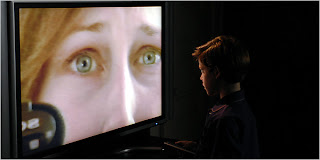 Pitched as a sophisticated horror film, along the lines of "The Exorcist" and "The Bad Seed," Ratliff's film is much more than that - an unforgiving, staunchly unapologetic look at how a child (played by the preternaturally gifted Jeremy Kogan) systematically ruins the lives of his parents.

To say that "Joshua" is not child-friendly is an understatement. The title character's malevolent relationship with his mother and father is precisely what drives the film - and it's also exactly what doomed it at the box-office.

The lesson to be learned from the dubious horror films of 2007 is that while audiences will sit still for (and even enjoy) torture flicks, they won't put up with an unpopular, disturbing social statement, no matter how serious and well-executed it is.

Profoundly moving, "Joshua" is decidedly not a tidy little chiller made for the cineplexs. Heck, even the art-house crowd couldn't handle it. Nevertheless, it remains one of the best - and certainly one of the most audacious - films of the year, and its stars, Sam Rockwell and Vera Farmiga, as the sacrificed parents, both turn in performances that can only be described as, well, major.

Anyone interested in perusing some 2060 of my film reviews, dating back to 1994, can do so by simply going to RottenTomatoes.Com
Posted by joe baltake at 9:57 PM

The same thought crossed my mind when I saw "Joshua" - a great movie but an audience alienating one. It should have been made 20 or 30 years ago.

Sorry I missed this but, as you point out, it didn't last long. I guess the company just gave up on it.

A genuinely unnerving film. A bold, frightening story that I thought was a supernatural thriller when I 1st saw it.

Wish I understood the jabberwock comment made by Joshua as he walks away from Lily's pram neat the end.