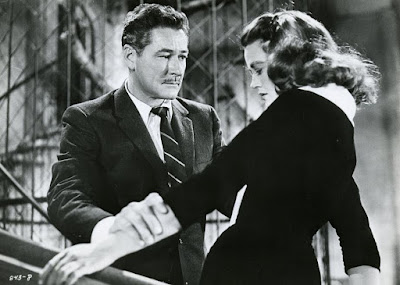 There are actresses about whom enough can't be said. Hepburn and Davis are inarguably two of them. And then there are those, equally accomplished, whose careers receive precious little acknowledgement or recognition.

You can't imagine anyone else in the role. Not Elizabeth Taylor. Not Joanne Woodward. Not Piper Laurie. Not Jean Simmons. Not Shirley MacLaine.

This is the only film that truly showcased Malone in which she is/was The Star  and she rewards her director and the viewer to an intricate, multi-faceted performance that is at once exhilarating, scary and sad.

And she is ably abetted by Flynn, who is very moving as Diana's father, and by such B-level actors as Efrem Zimbalist, Jr., Ray Danton and Martin Milner as the assorted men who flit in and out of Diana's life - and bed.

The maker of "Too Much, Too Soon," one Art Napoleon, is also a curiosity. He made only three films in his lifetime, the other two being "Man on the Prowl" (1957), his debut feature starring Mala Powers and James Best, and "The Activist" (1969) which, to the best of my knowledge, was never released. All three films were written by Napoleon's wife, Jo, who also worked with him on several TV shows - "Whirlybirds," among them.

* * * * *
~image~
The lost performances of Errol Flynn and Dorothy Malone as John and Diana Barrymore in Art Napoleon's biopic, "Too Much, Too Soon"
~photography: Warner Bros. 1958©
Posted by joe baltake at 7:30 PM

Malone was majestic. She should have been Bacall's heir to the title of hot femme fatale. She made it seem effortless, almost natural. Thanks for the tribute.

Wow. I like this site enormously and never encountered it before today. The way I did it ties in with what I'm about to note, which is something I've never encountered before. I was reading Kliph Nesteroff's recent column about Errol Flynn's voyeurism and while commenting, I noted that Flynn was especially interesting in "Too Much, Too Soon," an example of how Flynn's acting got better as he got older. I grew curious about what the real Diana Barrymore looked like, ran her on Google Images, and was astonished to see that she looked exactly like her niece Drew Barrymore. I don't mean resembled her, I mean looked precisely like her. Have a look but make sure you're sitting down when you do.

There's a reason why Hepburn titled her autobiography, "Me." No surprise there. Methinks the woman was possibly im-poss-ible.

I think that should be "Tip ON a Dead Jockey," Joe.

Would love to see Too Much again. Malone is so sexy in The Big Sleep, I sometimes think she should've stayed brunette. Then I see The Tarnished Angels and think, "nah, it's all good."

Absolutely, Bunuel. Correction made. Thanks. -J

When I first saw the film some years ago, I was simultaneously impressed by Flynn's superb performance...and saddened by the fact that his premature death robbed us of many fine performances that would have come. There was a splendid character actor inside him that was just beginning to emerge, and one could easily imagine him appearing in many of the big 70mm roadshow epics to come in the next decade.

As for Malone, don't forget that she probably hit the peak of her stardom on the "Peyton Place" TV series of the mid-to-late '60s.

And sadly, the lack of respect for her talent was crystallized by her omission from the Academy's "In Memoriam" reel, despite the fact that she was an actual Oscar winner (for "Written on the Wind.")

Mike- Yes, her treatment by the Academy during its last two In Memoriam gaffs was pretty bad - gratuitous and unnecessary. Exactly how difficult is it to do a fact check these days? And that Oscar she won was a rarity - fully deserved. -J

A lot of Mikes today. OK, only two. My last comment was in response to Mike Schlesinger. This one is for Michael Powers, re the resemblance between Drew and Diana.Imy humble opinion, all the Barrymores look alike. It's amazing. It's the same face! -J

I've seen this movie once, late at night, and was impressed by the work of Malone and Flynn. They were both convincing and heartbreaking, despite a script that was sometimes less than top-flight. There's a scene on John Barrymore' yacht where he's reciting Shakespeare and falls into the water that's terrific - well-acted and well shot. Malone should be better known, if only for the fastest, most fun seduction on film in The Big Sleep. How did that get past the censors? I agree she had a distinct sensual quality, but her intelligence, combined with a certain air of sadness, made her memorable.

Bill- Your use of the word "sadness" says it all. An astute comment that underlines the singularity of Malone. Well-put! --J

In 1958, Martin Milner played the long-suffering guy who waits for the female lead to come to her senses in both Too Much, Too Soon and Marjorie Morningstar. Both films end the exact same way with Milner and Natalie Wood and Milner and Dorothy Malone getting back together on a bus.

"The Last Voyage". As a kid this was the first time I felt my blood pressure going through the roof as Robert Stack, Edmond O'Brien and Woody Strode tried frantically to rescue a trapped Malone crushed under a beam that had fallen on her in a sinking ocean liner. I think I fell in love with her then. Could be the first disaster movie before we called them that. Remember this one folks?

In terms of TOO MUCH, TOO SOON, it has been decades since i've seen it, but i had actually read the book (as well as Gene Markey's biography on John Barrymore, GOOD NIGHT SWEET PRINCE) and the movie seemed a mish-mash. Errol Flynn was nothing like John Barrymore, but he brought his own dissolute legend with him, and Dorothy Malone was good; in fact, i remember wishing she had been in Minnelli's THE BAD AND THE BEAUTIFUL, instead of Lana Turner, so that a real actress could have tackled the part of Georgia (who was so obviously based on Diana Barrymore).

But my point is that it does take SOMEBODY to know how to present talent: without Sirk, Malone might have been stuck in a rut. Just before WRITTEN ON THE WIND, Malone was in PUSHOVER, where she's the good girl - a nurse, no less - while Kim Novak is the femme fatale and Malone is once again good but not quite exciting.

Though there are always examples of someone of limited talent who becomes a star and someone of equal (or greater) talent who doesn't, a lot of variables factor in. In the 1950s, when the studio system was on the wane, one of the important factors was the ability to find sympathetic collaborators, especially directors. Audrey Hepburn always said she was lucky to have worked with William Wyler (three times), Billy Wilder (twice), and Stanley Donen (three times), as well as King Vidor, Fred Zinnemann, John Huston and Blake Edwards. As she said, "they had the talent to make a marketable commodity out of this skinny broad."
Dorothy Malone had been in Hollywood since the 1940s; aside from her knockout cameo in Hawks' THE BIG SLEEP, she was often cast as the good girl (as in Walsh's COLORADO TERRITORY), where she was usually competent but often not-quite-memorable. But it took Douglas Sirk to unleash her sexuality in WRITTEN ON THE WIND, and it changed her from a standard-issue ingenue to a star. But she was already in her mid-30s, and Hollywood didn't have much for her (within a decade, she would be on TV in the series PEYTON PLACE).