"Run Home, Slow." Yes, a grindhouse original, but where to start?

First, an admission: I saw this film only once. A lifetime ago.

"Run Home, Slow" had the distinction of having played on The Late, Late Show on a Philadelphia TV station at the exact same time as its opening in a Philly grindhouse on Market St. Which has to be something of a first. 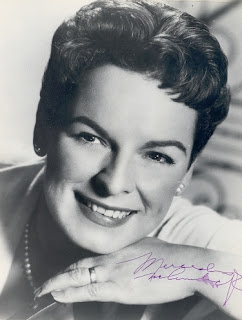 And it is the first and only film directed by Ted Brenner, who for some reason, is billed here as Ted Sullivan.

I remember it - vaguely - as being either truly awful or truly visionary, in an Alejandro Jodorowsky sort of way. What I do recall clearly is the outlandish, quite insane lead performance of Mercedes McCambridge, doing her patented Mercedes McCambridge thing (read: a retread of her performances from Nicholas Ray's "Johnny Guitar" and George Stevens' "Giant") as a tough cow-woman bent on revenge.

She plays Nell Hagan, the scary matriarch in a family of dim-witted men who are on a mindless quest to avenge the hanging death of their ruthless father. McCambridge stumbles around here in a Method Actor daze, mouthing monologues of mysticism and in a way that's equal parts of deranged and entertaining - and that prompts one to want to re-evaluate her critically admired performances as Emma Small in the aforementioned "Johnny Guitar" and as the curiously named Luz Benedict in "Giant."

Linda Gaye Scott -  a promising young starlet at the time (and, reportedly, an heir to the Scott Paper fortune) - is on hand as a Hagan cousin who gets cozy with Nell's two brothers (never mind that they are all blood relatives) but is utilized here largely to take Nell's driving, sadistic abuse.

Shot in black and white in a truly creepy, shadowy style by Lewis Guinn and scored by Frank Zappa - yes, that Frank Zappa - "Run Home, Slow" may not be even remotely good but, once seen, it is not easily forgotten.

I offer myself as testament.

In fact, I'd really like to see "Run Home, Slow" again. Here is a genuine "midnight movie" that was ahead of is time, never finding its niche.

Weird. I never heard of this movie, and I keep up with movies big time. Sounds ... curious

Linda Gaye Scott. Where is she now? She must have been a kid when she did this film.
How about a photo or two of her - past and present??? PLEASE! -Passionate Paul

Well, Joe, this one is truly worthy of the term "cinema obscura". I never heard of it! Mercedes has always been one of my least favorite actors, one whose name in the credits immediately sets me up for a let down (Adam Driver is a recent addition to my list). But YouTube once again comes to the rescue and I look forward to giving it a watch. YouTube continues to be a source for obscure oddities. I searched for years for The Wind Cannot Read, a British war film that David Lean was originally scheduled to direct (it was also the last film to play the Roxy) and I found it on YouTube. Here's the link to Run Home, Slow. (With a title like that...!)

Thanks, Kevin! The film is a hoot (as I remember it), so it might not be another Mercedes McCambridge let down. Anyway, let me know what you think. -J

This one flew under my radar, too. Speaking of early Zappa efforts though, I presume you've seen Timothy Carey's jaw-dropping, dementedly original "The World's Greatest Sinner," which the young Zappa scored? TCM screened it a couple of times ages ago in its TCM Underground Friday night slot.

Thank you, Kevin Berry. I also find Adam Driver highly resistible. And thank you, Joe, for bringing what sounds like a most idiosyncratic movie to my attention.

Kevin & Charlotte- We're all on the same page about Driver. It's typical that, of all the players on "Girls," he'd be the one to end up with a huge film career. Yes, he's talented, much like so many other actors, but also annoyingly off-putting. -J

Joe! I won't sleep a wink at night until I see this film, my kind of movie!

Well, Joe, Run Home Slow is a true curiosity, alright. Scary Mercedes is still playing Luz but without George Stevens to control her. That long, dark, static dialogue scene at the beginning is a killer! Then it starts to feel like a drugged version of Treasure of Sierra Madre performed by the inmates of Charenton under the direction of the Marquis de Sade. Did Frank Zappa even see the movie, or did he just phone in the score? His naive, sixties TV-style music brought to mind another clinker from the same year, Who Killed Teddy Bear?, which has the same kind of perverse, cheesy, poverty row fascination, somewhere between a real movie and a put-on (Sal Mineo? Elaine Stritch? Juliet Prowse? And Jan Murray, of all people!) ... We movie addicts kiss a lot of frogs! As usual, your recommendations take me on exotic journeys.

Thanks, Kevin. Happy you enjoyed it - well, kind of. I think. -J

This movie's title has the most puzzling comma this side of the Rolling Stones' "Paint It, Black."