It's odd, isn't is, that in a "free society," conformity is not merely expected but actually demanded, with persistent coercion soon to follow.

Two weeks or so ago, when Donald J. Trump first expressed his latest outrage - namely about the lack of patriotism indicated by those NFL players who kneel in protest during the National Anthem - Turner Classic Movies screened the 1952 Cary Grant comedy, "Room for One More."

It was a Saturday - September 24th - and I remember thinking that, if there was a remote chance that Trump was also watching the film, we'd be exposed to yet another flag-waving tirade about American loyalty/pride.

Why? Because towards the end of this charming family movie, there's a Boy Scout sequence, during which the original Pledge of Allegiance is recited, a version that does not include the words "under God"!

But, remember, the film in question, directed by Norman Taurog, is from 1952.  The words in question were added two years later in 1954.

For years, it was believed that those two words were included in response to the onset of the Cold War. Not true, even though the two coincided. 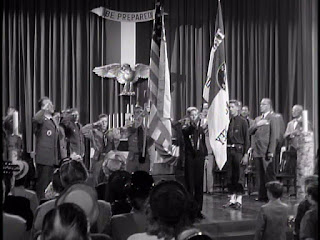 The original version of the Pledge of Allegiance was written in 1887 by George Balch, a Rear Admiral devoted to teaching loyalty to the United States to children and immigrants.

It was revised in 1892 - in largely the form as we presently know it - by Francis Julius Bellamy, a Christian socialist minister who disapproved of Balch's version. In '54, George MacPherson Docherty, the Presbyterian minister of the church attended by President Eisenhower, suggested that something was missing and had the two words, "under God," incorporated into the Pledge. So much for the separation of church and state, right?

I had an image of Trump screaming at his TV screen - and tweeting - as the Turner movie aired. Then another movie - and another character - came to mind:  Dame Marjorie Chardin, aka Maude, who had some radical ideas on the subject of patriotism that could prompt yet another tweet. 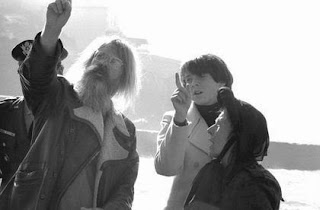 In "Harold and Maude," Hal Ashby's terrific 1971 film, Maude (Ruth Gordon) talks about her lifelong activism, prompting her new best friend, Harold Chasen (Bud Cort) to ask, "What were you fighting for?"

"Oh, big issues," Maude explains. "Liberty. Rights. Justice. Kings died, kingdoms fell. I don't regret the kingdoms - what sense in borders and nations and patriotism? But I miss the kings."

Colin Higgins, who wrote "Harold and Maude," was clearly ahead of his time. He knew that patriotism, ostensibly a good thing, could also be divisive, setting up unnecessary borders. And walls. And conformity.

As the NFL has regretably demonstrated.

* * * * *
~images~
(from top)
~Cary Grant (from left), George "Foghorn" Winslow, Betsy Drake (aka, Mrs. Grant), Iris Mann and Gay Gordon reciting the Pledge of Allegiance in "Room for One More"

~The Boy Scout ceremony in "Room for One More"

Hi Joe. I was in Paris when I saw the whole NFL, flag bitch fit Trump had. It had me shaking but I was comforted by the fact that when I left Paris, I didn't have to fly back to the States. Ever again. He is getting worse every single minute. k.

I think we'll soon be asked to pledge allegiance to not God but The Donald.

Even though I was only 11 or so years old, I remember thinking at the time that the addition of "under God" was silly and went against the Founding Fathers intent of separating church and state. It makes me furious when bone headed politicians wrap themselves in religion.

I hope The Donald doesn't happen upon Chuck Jones' 1939 Merrie Melodie, OLD GLORY; the entire cartoon is an American history lesson for Porky Pig, led by a ghostly Uncle Sam. At the short's stirring conclusion, the young pig delivers a most sincere rendition of the Pledge of Allegiance -- sans, of course, the later added words, "Under God." The cartoon pig is already dealing with enough PC controversy regarding his stutter -- he doesn't need the President calling him out on atheism charges...